Spring That Trap – by Tim Childs 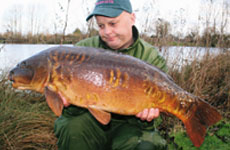 Bait and the successful application of it can mean different things to different people, and of course this can change dramatically at different times of the year. As anglers we all fish different venues and whilst some may fish busy well stocked day ticket waters, others choose the solitude of big fish low stocked venues.

One thing’s for sure though and that is any successful angler will have a good idea of how to use bait to its best advantage and know when and how to apply different baits at different times of the year.

March and April are the months that usually see the carp become more active after a period of slow or sometimes little activity and as the suns rays penetrate the cool waters the increase in activity will lead to a certain degree of feeding, on some waters this can be slight whilst others especially heavily stocked venues the fish may feed harder, the key is knowing the difference and adjust your tactics and baiting accordingly. 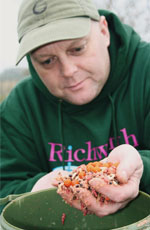 Over this spring I’ve been visiting a few different venues, mainly day ticket or club ticket waters and like many venues of this type that see a quick turn over of anglers as soon as we get a sneaky peak of the sun, out comes the spod rod and throwing stick. Whilst I’m not knocking anyone for doing this I feel that the more bait that is applied at this time of year the less chance I have of getting a bite. The other thing to remember is that on popular day ticket waters come the spring there maybe a number of anglers who have not been out fishing for a few months and are ‘chomping at the bit’ so to speak, the term trigger happy spodding comes to mind on some waters at this time of year and quite frankly there are times when more is definitely less. One friend offered me some good advice recently when it comes to early spring fishing and that was ‘fill it in at your peril’ he’s not wrong.

It’s an easy mistake to make and one that I’ve made myself on more than one occasion. Remember though when water temperatures are still low and the fish sluggish and covered in leeches then giving them a simple attractive mouthful may give you a better chance than pilling the bait in.

You maybe following someone into a swim where the angler unbeknown to him has just done the same 24 or 48 hours previous and he may have followed someone else into that swim… You get the picture? Try and look at it this way, if every angler puts in just a kilo of bait on a busy day ticket water that see’s 20 anglers per day, then that’s 20 kilo of bait every 24 hours, times that by 7 days and that could be 140 kilo of food every week. Now before anyone says ‘’yes well there are 200 carp in the water they’ll eat that no problem’’, well perhaps they will in the summer but in the cold months of March when a mouthful or two is all they want or need then its easy to see how baiting can become out of hand. The other point worth mentioning is that some anglers will blindly copy others whether they’re successful or not, they see the spod rod come out 2 swims down the bank and before you know it everyone’s letting loose with buckets of bait.

Carp are influenced by tempreture and light levels at this time of year and in March and early April the water can still be very cold, a couple of days sun may get them moving a bit but are they ready for a huge munch? Personally in my experience I’ve found they are more likely to slip up on snacks or small bites than 5 course banquets. 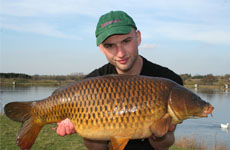 One important point that I’ve found in the spring is to watch and listen to the water as much as possible, fish rolling at dawn and dusk is a good sign of their activity whilst fish heard rolling or even crashing at night certainly means one thing, there active and will be looking for food. Notice I’ve said looking and not heavily feeding there’s a big difference and a small plate of food is usually enough to get a bite at this time of year.

Even with this increased activity I’ve rarely know them to be up for a big munch in March and April. I found myself fooled into the ‘give it the big un’ with the bait in early April of 2010 whilst fishing Baden Hall in Staffordshire. A few subtle shows at dawn soon after I arrived told me where the fish were and in my eagerness I wrongly decided to give the fish plenty of bait, after depositing a good helping of maggots, boilies, hemp and pellets out into the centre of the pool, I then sat there blanking for almost 36 hours! It was two friends Paul and Craig who arrived the following day who made me realise the mistake I’d made as after changing my approach and moving to another swim we all managed to land a number of fish to almost 30lb between us, all falling to small solid PVA bags of pellet and bag mix combined with bright 12mm hookbaits. These small attractive piles of bait combined with ‘here I am’ bright hookbaits were just what the fish wanted at that time. The spod rod was packed away and that’s exactly where it stayed for the remainder of my stay.

This was an important lesson for me and one that I won’t forget in a hurry. Baden Halls a venue with a good head of carp and whilst these fish were active it became obvious small traps were the way to fool them early in the year. A recent trip in late March of 2011 with fellow Richworth consultant Rob Sutton confirmed my thoughts as small traps and single hookbaits once again were the winning methods. Whist I’m all for giving the fish a good food source come the end of May and June especially either side of spawning that short window in late March and through April can be excellent time for getting bites on ‘bits and bobs’ and believe me all you need is a little attractive snack. 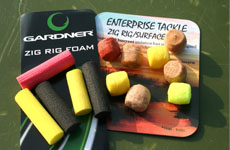 My bait bag for this time of year usually contains the following; a few tubs of bright Richworth or hand rolled special pop ups ideal for fishing single hookbaits or in PVA bags, a tub or two of hempseed usually the PVA friendly versions like the ones sold by Baitzone, a low oil pellet mixture and some kind of bag or stick mix like the excellent KG1 and Tutti Frutti versions, whilst I always carry a selection of Gardner Tackle’s zig rig foam in all colours that has proven to be deadly at this time of the year. A pint or two of maggots and I’m happy enough I’ve got a selection of baits to cover my needs.

There are a number of excellent methods that catch carp in the spring, zig rigs, single attractor hookbaits and PVA bags or stick mixes are all excellent methods at this time of year just remember the fish have just started to wake up and it’s so easy to over do things with bait especially after a cold start like the one we’ve just had.

Keep it simple, use your eyes to let the carp tell you where they are and what they want, then give them just enough to get you a bite, simple.