I enjoy reading the monthly articles by my Gardner and Mainline team colleagues but I’ve decided to do something a bit different.

I decided I’m not only going to talk about fishing in my ‘updater’ series, I’ll be talking about other things too. There are so many ‘how to’ type pieces out there! So, I’m going to talk more about the actual angling i.e. watercraft etc. rather than too much technical stuff, but of course there will inevitably be some. Hopefully you will enjoy the read and pick up some useful bits along the way. Remember I’m a ‘normal’ bloke with a full time job and family commitments like the rest of you and I probably live in the worst place in the country for carp angling- Cornwall! I’m sure you’re like me and love reading about 40’s being banged out week in week out, however this series will be slightly different because the venues in my neck of the woods unfortunately don’t hold any 40lb plus fish! However, watch this space! We do have some very special venues that hold some cracking fish, coupled with this the banks are generally very quiet here, a real plus point! It’s a different type of carping shall we say!

Firstly then, what I’m going to say is no matter how technical you want to get with rigs, bait, bait application etc. and the latest gizmos, there is no substitute for effort and maximising your time. Putting in the effort at home by tying various rigs, making hook baits, researching on the internet etc. will definitely stand you in good stead and will save you time on the bank, which in turn will put bonus fish in your net.

I’m going to go back a couple of months and take you down to Argal Reservoir, near Falmouth, Cornwall. Argal was a trout lake up until the year 2000 when the College reservoir next door closed down and the carp were caught and moved to Argal. It was a real shame because College is the perfect carp water with everything we carpers look for- 40 acres, shallow, silt, gravel bars, weed, islands, bays and loads of natural food. Argal on the other hand is deep with shallow silt, no weed and full of stumps, old Cornish walls, and huge rocks. Its underwater snags can be a nightmare for any new angler fishing the place, however once the topography is known it’s a doddle because at 65 acres there are huge clear areas between the snags. The reservoir did hold two carp in excess of 40lb, however both of these passed away. It also held many 20lb and 30lb carp, old dark Leneys, absolutely stunning target fish which were originally stocked into College in the early 70’s! The lake still holds many 20’s and a few 30’s but nothing big by today’s standards. The entire stock is probably around 150. 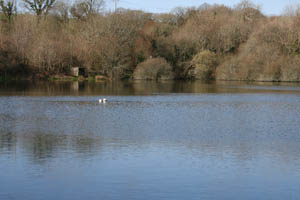 I hadn’t planned on going fishing but was in between shifts and decided at 7.30pm to trundle off down to Argal, which is only 5 miles from home. I had done a little homework while out walking the dog over previous days and I already knew where the fish were. Thankfully the one and only swim I wanted was free.

I wanted to use Cell bottom baits, the carp had eaten loads of Cell over the previous months and were well on the bait. 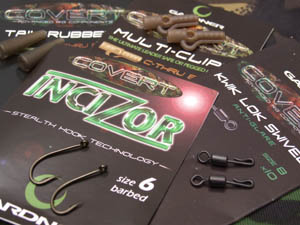 I tied up three identical hook links comprising of Gardner Sly Skin in 25lb. Certanily the best coated hook link I’ve found for fishing over shallow silt. This was knotless knotted to a size 6 Covert Insizor hook with 0.5mm Silicone on the shank and a shrink tube kicker off the eye of the hook to aid turning, a great rig for bottom baits. I tied the links off with an overhand loop knot making them around 7 inches long and then attached them to Gardner Multi Clips incorporating Kwik Lok swivels. After a leadcore ban on Argal I used Covert Sinking Rig Tube out the back of the Multi Clip, which I flecked up with a black marker pen. 2.5oz Ranger Chod leads were attached also aiding camoflage and confidence. Nature doesn’t have straight lines so I think the more I do to break up straight lines the better, unless I’m using Mirage Flurocarbon straight through as this is invisable, or near as dam it. Cell Dumbells were attached along with slivers of my homemade Pineapple pop ups just to add a visual element to the hook bait.

The rigs were cast in an area with all three no more than 25 yards apart, I then set about adding a kilo or so of free offerings spread over the rods, a mix of Cell and new Grange boilies. I had a few liners through the night and at 6.30am the right hand rod was away and after a short battle I had a real old warrior in the net, a mirror of 17lb. 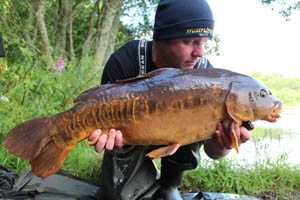 The rod was recast with a further helping of free bait. In no time at all the same rod was away again, just as I was doing some self takes of the 17. This time a common was nestled in the folds of the net and this one hit 25.10lb on the scales. 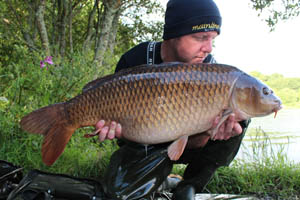 I was enjoying myself to say the least. Next up the left hander dropped back slightly and then roared off. A small fully scaled was on the other end, around 10-12lb and I was in angling heaven, getting action like this on Argal is rare given it’s stock, size and depth. 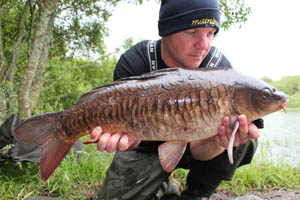 The best was yet to come and at 11am the right hander ripped for a third time and after another great fight I saw a distinctive shape in the way of head and shoulders and I thought to myself “That’s the Big Fully!” It was 20 years after the first time I landed this stunning fish, and there it was in my net again. After successfully spawning the fish weighed 28.04lb but that was immaterial. 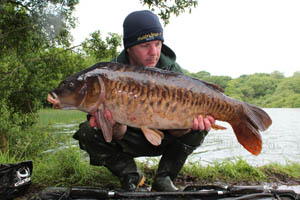 I took some self takes, treated the hook hold with Gardner Medic plus and returned her as soon as possible none the worse for her latest experience. It was an over nighter to remember and nice to relive all that history. 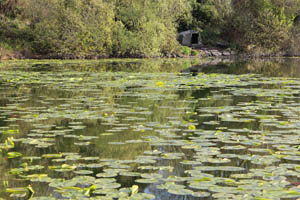 My next session found me at a small five acre lilly covered reservoir, basically a silty bowl with a gravel margin and a large dam wall. It holds some nice 20’s and one 30lb plus carp in the shape of a 37lb common, a carp that I want to target in the future.

I arrived prior to my two friends for a social night on the bank. There was one other angler fishing doing a day session, I had a quick chat and quickly moved on, I’m not sure he was all there! Anyway, I made my way down to swim 4, a corner swim, and there I saw around 20 carp. I thought “That’ll do me” and I hot footed it back to the van for the gear. Not long after I had two zigs sat just under the surface as I awaited my mates arrival. The afternoon came and went, and by 6pm I was bottom fishing using naked chods and my homemade Polaris Pineapples over a scattering of Cell and New Grange. By morning I had had seven takes and landed seven carp including a brace of 20’s. 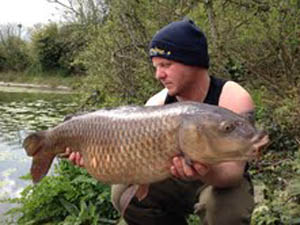 The size 6 Covert Chod hooks used with Trip Wire hook links and Mirage mainline is such a winning combination that is reliable to say the least. I’ll be back for the big common another time and when I bag it I’ll be sure to tell you! 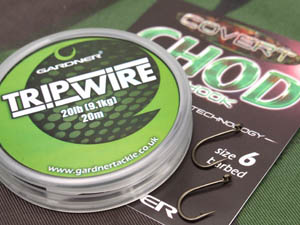 The next session saw me at another local reservoir which is on the up. This reservoir is effectively square in shape and around 8-10 acres in size but there is something about it I really like, I just can’t put my finger on it! Perhaps it’s the location as this little ressie is dark and quiet at night with no traffic noise whatsoever. It has a silty bottom and some nice weed beds, which I love! It holds a nice little stock of carp up to mid 20’s and I normally use it as a winter rod bending water. It’s not an easy venue, but I’m normally confident of bagging a couple on an over-nighter. 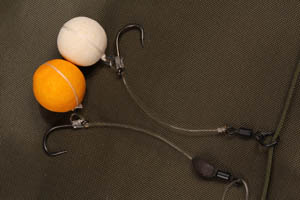 On this session I arrived later than I wanted and dropped into an open water swim where I saw a fish pop it’s head out. The same end tackle was employed that I had successfully used at Argal and the rigs dispatched out to a range of 70 yards. I then set about spraying a kilo of Cell and New Grange over the top leaving plenty of room between the freebies to get the carp moving and feeding at speed. This in turn making the rigs extra effective! 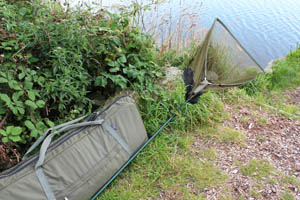 The mist rolled in over the Cornish countryside making it a good evening to be out and not in front of the TV. The night came and went, but the morning feeding spell put three fish in my Gardner Out-Reach net. It was a cracking, enjoyable nights fishing and the rip roaring takes in the morning topped it off. 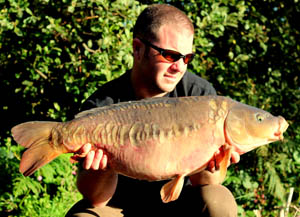 I went back to this lake the week after and fished one of the weedier swims, again on another quick nighter. I bagged commons of 14lb, 16lb and a 21lb mirror on this trip using naked chods over Cell and New Grange freebies. It’s good to have different rigs in your repertoire, the key is knowing when to employ them to give you the best chance of success on that session. 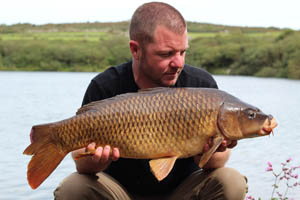 The last couple of over night sessions I have done have been on a syndicate lake which I have joined. I can’t say too much about it but it’s an awesome place, its 35 acres, shallow, extremely silty and full of naturals. 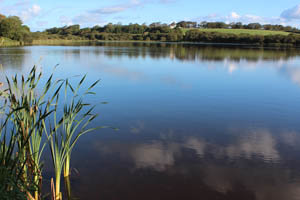 Only half of the lake can be fished and stock wise I have no idea, apart from its very low, maybe only a handful of carp. It’s approximately a two hour drive from home depending on traffic. You may think I’m mad fishing a lake like this but consider this; It’s such a small syndicate the place is hardly fished and the banks are deserted. The element of the unknown I find is very exciting. It’s hard work too, getting to the swims and walking around causes problems, which is off putting to most anglers. Catching any carp will be a result and there is always the chance of a chunk. This lake used to be regularly fished some fifteen years ago and has been untouched since, which suits me down to the ground!

My first night was a recce really and was blanked in style, however in the morning I saw a nice mid twenty crash out in the middle, unfortunately well out of casting range. I then saw the aftermath of another show which just had to be a carp. I planned on fishing the middle from a particular swim on my next trip, however the wind put pay to that and I set up in a large bay. I heard a crash in the night and was confident, but unfortunately blanked. Prior to leaving I dispatched several kilos of Cell and Grange into the lake, into several different areas. I can’t wait to get back!

That brings you all up to date with my limited fishing of late. I’ll be back again over the next few months with a further update, showing off some of the new Gardner products in action and hopefully a few trophy shots of some rare carp to boot!

All the best,
Tony