My second, and totally unexpected trip to France, came about after chatting to a Belgian angler I know called Chris Vandenhaute. He happened to mention that he had been fishing in France on a little known venue and had caught fish to a decent size. After several conversations via emails and Facebook, a date was arranged.

I set off for France with a brand new passport in hand and in the company of my good friend and angling companion Ryan Bull. We were due to fish for four days and after a stress free journey we arrived at the “secret” venue. We met up with Chris and his friend from Holland, Hans Van Den Brink, who are both consultants for different tackle manufacturers and on the same team for their respective bait sponsors. After a chat with the guys and the lady owner of the fishery some Euros were exchanged for the fishing and we headed off to our swim to have a look and set up for the first night. Chris and Hans had already been there for a couple of days and unusually hadn’t caught anything, on previous visits they had always done quite well. 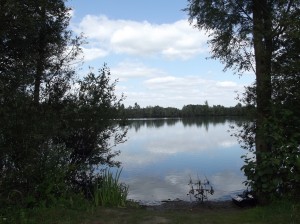 The lake was around 26 acres in size and surrounded by a tree line and reeds. There were around 12 swims dotted along the banks, which were spaced well apart. The swim we had chosen was in a large bay at the southern end of the lake, with a smaller bay to our right. We had a fairly uniform depth of 6ft dropping gradually to around 10ft with a clear, smooth bottom. Despite being a northerly, we had a relatively warm wind in our faces and fish were showing in front of us so we were hopeful of some runs. It was decided that we would fish our rods in areas at the start of the drop off and at the bottom of it in the deeper water. We were allowed bait boats, so we set about putting a bed of pellet, particles and boilies (once again Mistral Baits Rosehip, chopped and whole) on the spots. Our rigs were each placed into the hoppers of the boat in conjunction with a Micromesh PVA bag of pellet. We hoped this would allow the rig to sink slightly slower and hopefully eliminate any tangles that may have occurred whilst dropping the rigs straight from the bait boat.

As for rigs Ryan stuck with the running rigs that had worked so well for him earlier in the year, however I took a different approach fishing with a Gardner Tackle Heavy Plummet leadcore leader and a Covert Multi Clip in conjunction with a 3oz Bolt Bomb. The business end stayed the same as always with a size 4 Continental Mugga tied knotless knot style to 15lb Subterfuge Super Soft hook link material. 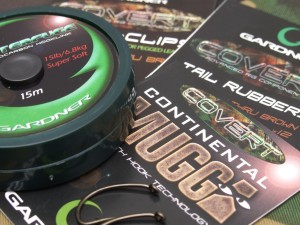 At 3AM the TLB indicator that the middle rod was sitting on roared into life and after a couple of minutes the fish had gone solid into what I later discovered was a large weed bed to my left. Despite patient efforts to free the fish it came off and I headed back to bed disappointed at missing my first chance of a fish. That was to be the only action on the first night, but come first light fish were again (although slightly further out) showing in front of us, so we decided to stay put for another night. After we had created a dinner from tinned products and boil in the bag rice, we decided to hit our beds and bivvies after consuming a bottle of red and putting the world to rights for a couple of hours.
The second night was to be a successful one and again at 2AM one of my rods ripped off and I was in. Whilst playing the fish Ryan’s middle rod cast only 25/30 yards out came to life and at first we thought my fish had caught his line. It soon became apparent he also had a run and after a hairy few minutes where we both had fish tearing up and down the relatively shallow margins, we both slipped the net under a fish. 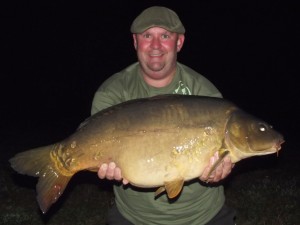 They were both mirrors and on the scales went 24lb and 32lb respectively, after weighing, some quick pictures were taken and they were returned to fight another day. Although this was the only action for the night, come first light, we were both happy to have a fish each under our belts from a new, unknown water. 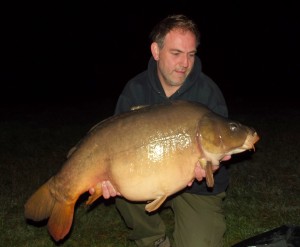 By now Chris and Hans had left for home with one fish between them, a cracking 43lb mirror for Chris caught using the ever-faithful Muggas I hasten to add! They had popped round for a chat before they left and informed us of a lot of fish showing in front of them. Despite being a relatively “unknown” venue it did see a few local anglers at weekends and was rather busy. The swim we were in was pre-booked for our last two nights, so we took a tour of the lake. With Chris and Hans words in our minds and the bonus of seeing some fish, we decided to move into the swims they had fished. 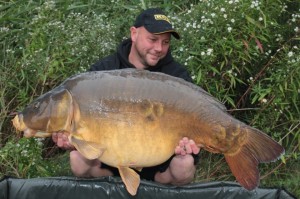 The first night in our new swims didn’t produce apart from a 5lb bream I had on a 20mm boilie attached to a size four Continental Mugga! This was surprising as we had seen a massive group of fish cruising on the surface above our spots, making the most of the unusually warm September sun we had experienced during the day, so we felt we were in the right area. 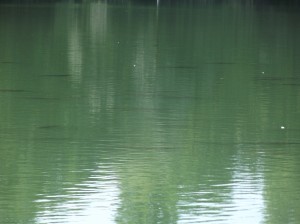 This was something we saw again on the second day but as the light values dropped and something felt different. The fish were showing over our spots, with a decent fish throwing itself out over one of my spots just before dark. After yet another makeshift “Drive and survive” dinner and a bottle of red we hit the sack in a confident mood. At 10pm my middle rod came alive and after a spirited fight I put the net under another mirror, this time she took the scales round to 26lb. 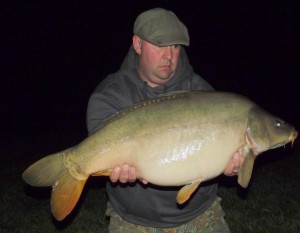 Despite the earlier time of the run and fish still boshing on the spots, we didn’t have any more action. We headed for home in a happy mood, discussing another trip back to the “secret” lake in the spring next year with a view to landing a few lumps.
Talking of a trip next year, on returning home my lovely wife put my dirty washing from my trip into the machine that evening and left me a note asking me to put it out the following morning as I still had two days “off” shift before going back to work. Whilst doing this I discovered to my despair that I had left my brand new passport in my pocket and it had got rather wet just like my previous one! With this in mind my top tip for going to France is not of an angling nature but more of a “Don’t be a total plonker Rodney” nature and always check the pockets of your shorts/trousers either before jumping in a lake to clear weed or putting them into the washing machine ! At least, after spending £190 on passports in the space of six months and with a third application for a renewal in the post I have learnt my lesson and it won’t happen again!

It won’t will it? Surely not!

Until next time, tight lines…