It was Saturday the 1st of September 2012 and I was to be met by more than 20 excited anglers (including my fishing pal Ricky Green), in the Church Farm car park awaiting our inaugural Society Match. 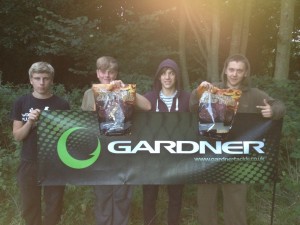 There was a good vibe all round especially as our more junior members received an excellent goody bag from Gardner Tackle and Mistral Baits; while Sandhurst Baits offered up 2 x £50 bait vouchers for biggest weight of fish captured on both lakes, and myself (at Isl Decorating) sponsored the trophies.

The draw for swims took place at 10AM and quite surprisingly most of the pegs drawn suited everyone, so no issues there.

Ben Sycha kindly wandered off and took some great photos, whilst the crew from the popular ‘Back of the landing net’ You Tube channel (Jay and Chris) did a superb job of filming the event.

It was some time into the Match when ‘Team River Kings’ found themselves taking the lead with the first part of their brace of ‘Tincas’.

Then there was to be a further 3 captures. These were by ‘The Blues’ with a Back Lake Mirror carp weighing 12lb 12 oz (securing 2nd them place); Team NiC claiming 1st spot with a Back lake 17 lb Mirror caught by Dan Hegan, and last but not least Steve Young with a conciliation Tench of 12 oz!

So the final results were as follows:

Despite there being 22 anglers and only a few fish caught, it didn’t really reflect on the complex’s calibre, and the most important thing was that everybody thoroughly enjoyed themselves; many laughs and humour shared across the venue, not to mention a few strangely dressed members in attendance (Ben & Jake).

There was to be a few unfortunate losses that were potential match winners, namely for Steve Young and Roberto Dennis, but they did well to get a bite under such difficult conditions.

The match would not have been possible without the sterling refereeing job done by Robin and Martin BH (aka sleepy).

Thanks and well done those lads!!!

Finally, Ben Sycha kindly agreed to return and produce what was to be a stunning group shot!

I would also like to take this opportunity to thank the committee for their backing, but also Phil and Lewis Jones, Paul Stokes, Lewis Read at Gardner Tackle, Alan and Caroline at Mistral Baits, Andy at Sandhurst Bait Supplies, Ben Sycha, BOTLN’s Chris n Jay, and really everyone for applying there friendly manor allowing the day to run smoothly.