The ever intrepid trio of Lewis Read, Dr Eric Roberts and Sam Meeuwissen recently spent a most enjoyable day on an idyllic stretch in the middle reaches of the prolific River Wye.

With a couple of miles to themselves, after a good scout about they settled at the top end of the beat in an area which offered the greatest variation in features and fish holding areas.

Fishing with 5 foot long hooklinks tied out of either 10lb Mirage Fluorocarbon or 8Ib Hydroflex monofilament and finished with either a size 8 Talon Tip or a size 10 Wide Gape Talon Tip, the team amassed a total of over 30 bites in the day – mainly the target species for the day, Barbel. 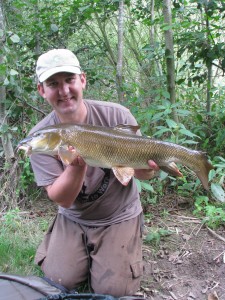 Sneaky Lewis initially showed Dr Eric and Sam the way by getting a handful of bites before sharing the ‘long hooklink’ secret, which then did the damage downstream. 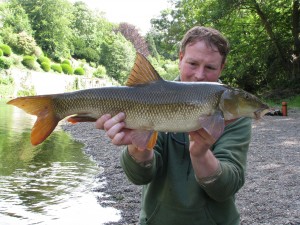 Sam and Dr Eric could hardly keep both their respective rods in the water (being in the tail end of Lewis’ swim!) after changing over from their trusty and normally super effective ‘Loddon Rigs’. 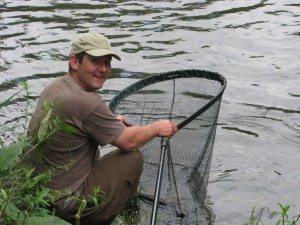 Tactics also included the use of large swim feeders, fished running style.  Crushed boilies were added to the plugged feeder with a small piece of boilie fished as a hookbait, and sometimes a small Micro Mesh PVA bag of goodies added to the hook to focus a little attraction around the hook bait.

Lewis used Carp Company Caviar and Cranberry Ice Reds doused in Aminol, whilst Dr Eric stuck with Hookbait’s finest 3B boilies and a smattering of Sticky Bait’s Krill Pellets and Hydroslate Liquid.  Sam was testing out the new Krill boilies from Sticky, along with the pellets and liquid Krill, which resulted in a total of 7 fish to his rod. 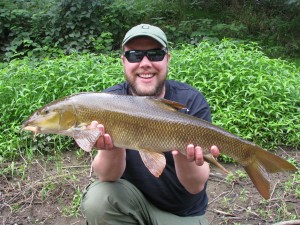 All in all not a bad day’s fishing, and despite the river running relatively low and clear the Wye Barbel fed well through out the day!