I’ve never really done any solid bag fishing. It always seemed too fiddley for me, and as far as I could see would only be a tactic employed by anglers fishing in weedy conditions or areas of heavy bottom debris. In and around where I live there are few weedy waters and therefore it’s a tactic I never even considered. The few waters which do contain some weed also contain large clear areas where a conventional rig can be fished tight to it effectively. Also the majority of the reservoirs in the southwest contain bream, big bream, and the fear of those slimy slabs kept solid bags and I well away from each other! 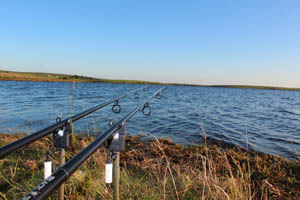 One particular reservoir that I fish, and one of my most favorite places to get the rods out has had an influx of new weed growth this year, probably due to the low water levels of last year. The lake in question unfortunately I cannot name because it’s not actually open to carp fishing! What I will say though, is that it’s extremely large, close to 1000 acres with very limited access. Being prepared to hump kit over terrain not suited for barrow work or indeed walking for that matter is a must, but it’s worth it because the lake is magical. On summer evenings you could be in the south of France it’s such a stunning area. It has a large stock of mostly wild commons (not the traditional wild carp, but uncaught, and never fished for carp) with a quantity of mirrors. As carp fishing goes in this country they are small carp which average low doubles, however we have caught them into mid twenties. I’ve seen them in there around spawning time when the fish are grouping up, into the 30lb plus bracket, so I know they’re in there! When fishing the lake there is so much anticipation because I just never know whats going to pick up my hook bait next. Plenty of mystery which is lost in a lot of carp fishing these days!

Moving back to the solid bags, the fresh weed covered the area I was fishing and I had the options of fishing extreme range in order to clear the weed and get out the back of it onto the clean silt or to wade my baits out and place by hand in close. I fished two rods on each of the two situations. This didn’t prove overly effective but I did have a great over night session fishing in close when a big southwesterly blew up. On checking the weed it was full of naturals and the weed itself was almost alive in my hands so I then decided I needed a new tactic to fish in the weed! This is what led me toward a solid bag. I’ve read plenty lately on their effectivness when fished on a clean bottom as well as in weedy conditions. I wanted to cast on top of the weedy area and almost lay the solid bag lightly down on the top, on a tight line. My plan was to then lightly spod over the bag drawing the carp to the area and then down on to the bag itself. The weed seemed to be only a foot or so off the bottom in around 12 feet of water so it appeared a good plan.

I used the Gardner standard sized solid bags, firstly because I wouldnt be fishing at long range. The cast would be around 60 yards to the weed. Secondly because I am a solid bag rookie the larger bag would be easier to set up with my sausage fingers! Happily I’m pleased to report I’m now a master with the mini bags which I use for distance solid bagging! 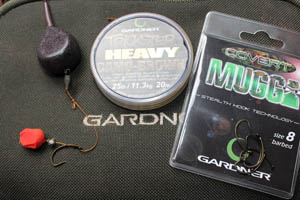 The set up I use is a very short length of 45lb brown Heavy Plummet leadcore, approximately 12 inches. To this I slide on a 2oz flat pear in-line. No need for a tail rubber as the insert in the Gardner inlines are a soft rubber which fits snuggly around a size 12 Covert mini rig swivel. An extra small Covert speed link is attached to the other end of the swivel to make changing hooklinks hassle free. A piece of silicone is used over the speed link to aid neatness and security. Using the set up in this way is perfectly safe. The lead can come away from the swivel and with a nice neat spliced loop can pass over and off the leadcore should a breakage occur. The hooklink itself is 3 inches of 25lb Trickster Heavy, an awesome hooklink material and the best braid I’ve ever used (and I’ve used a fair few over the years)! A faithfull size 8 Covert Mugga is employed, knotless knotted to the Trickster. They seem to prefer orange hookbaits on this lake so what better than a Mainline Tutti dumbell pop up for a hookbait, balanced with a shot on the hair. 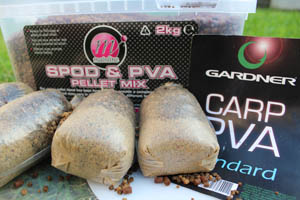 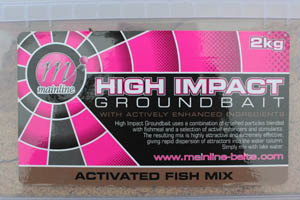 Bait wise I decided to go with Mainlines fishmeal groundbait along with their new Spod and PVA Pellet mix which is a blend of pellets, which will release different attractors at different times as they break down on the bottom, simple as that! The groundbait goes in the bag first, dry. The amount is just enough to plug the lead into, but keep the hookbait out because that goes in last. Next start filling with the pellets, up to around half to two thirds full. Then add more groundbait to allow the hookbait to be plugged in, followed with a touch more to completely cover the hookbait. Its a case now of twisting the bag around several times to hold everything in place. Once this is acheived I lick the twisted area and twist a few more times effectively locking and sealing the bag. I lick and fold the corners of the bag to add aerodynamics for casting. This will give perfect presentation with a highly effective bait and once the Mugga nestles in the bottom lip It’s a fish on the bank guaranteed! 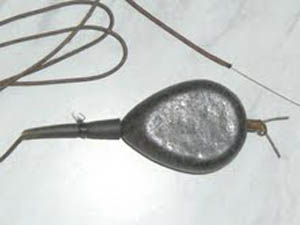 Always lick and stick or use pva tape to seal solid bags, dont use mono or other materials as this could turn your rig into a death rig as illustrated here! This rig was attached to a 30lb plus mirror which was trailing it, thankfully the carp was returned prior to any damage being caused.

The spod mix consists of;
1. 1 bag of Bait Tech’s superseed Hemp.
2. A tin of Bait Tech tigers.
3. Any of the Mainline dedicated groundbaits, Nut mix this time! This will stodge the mix up stopping spod spill as well as add attraction.
4. A good helping of Cell and Bloodworm pellets.
5. Homemade Liver and Marine fishmeal chops.
6. A small quantity of Cell and New Grange boilies in 15mm. 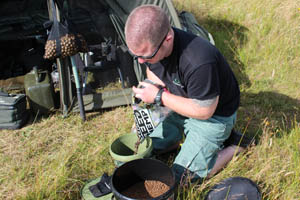 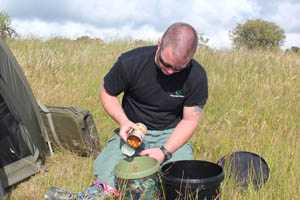 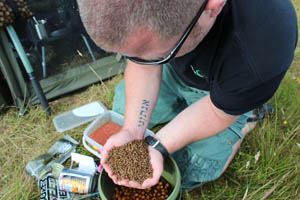 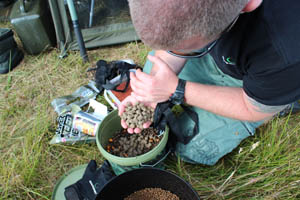 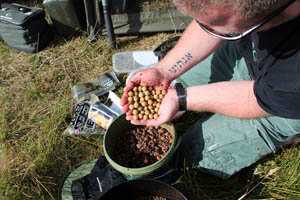 Added to this are liquid attractors such as Fosoil, Metamino and Multi Stim. No exact measurements but approximately 60ml oil, 40ml Metamino and 20ml Multi Stim. Liquids are essential and enhance the mix making it so much more effective. 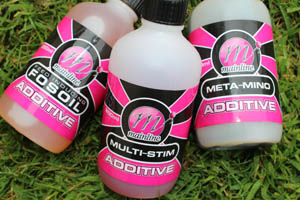 No matter where you fish, for big carp or smaller fish, on small weedy waters or large open reservoirs solid bags are worth a crack. As you can see by the photos the tactic worked for me, a bagging novice, so it can work for you too. 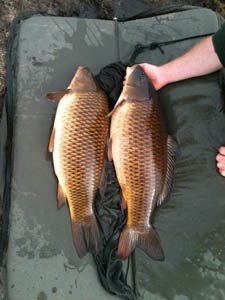 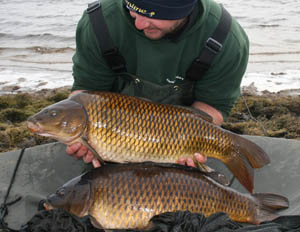 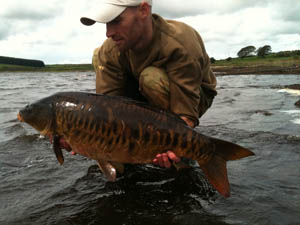