A week in France – by George Day

Once a year I go on a family holiday to the south of France and this year was no different. The first week was spent in a lovely place called ‘Albas’ on the banks of the mighty River Lot, where I set river carp and barbel as my target. My second venue was the River Dronne, a river which I have fished many times before and would like to think I know well.

Most of the first week on the River Lot was used trying to find out just what to do and what the fish would respond to. My plan of attack was to regularly bait a swim and keep fishing it throughout the holiday. Every day I baited with at least ½ a kilo of Odyssey XXX in my desired spot, in hope that that it would draw the fish in. After purchasing my ‘Carte de peche e vacances’ (holiday fishing license) from a local bar, something which is essential when fishing the rivers in France, as the French bailiffs (unlike ours) carry guns, so you don’t want to be caught without you license. I decided to give the river a quick half an hour and within seconds of casting out the rod hooped over and I was into what would be the first of many River Lot barbel. All are strong fighters and had most likely never been caught before, fantastic fishing! 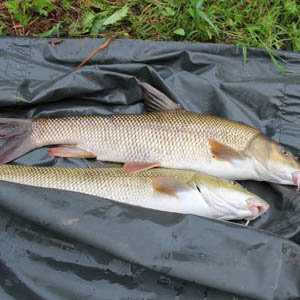 We were on the Lot for only a week so I decided to make the most of it fishing the venue both early morning and into the night, this went on for a week with only barbel in the morning and bream in the evening to show for my efforts.

Despite my best efforts to push through the small fish I was still catching small 6-7oz barbel on three 18mm boilies and size 2 Gardner Wide Gape Talon Tips. In the end I decided it was impossible to ‘push through’ the small fish and would simply have to wade through instead and hope a carp would pick up the bait.

Almost inevitably it was not until the last day that one of the rods finally properly roared off and I was in to a hard fighting carp. However, within seconds of this happening the hook pulled, I was absolutely gutted as I knew it was my last chance to have a River Lot carp.

The next day we drove around one hundred miles north to spend our second week on the River Dronne, a river I’ve fished many times before now and ‘know’ the spots where the carp tend to hang. After buying my second carte de peche from the local Tabac store in Brantome, I set off to a little spot where the river deepens off to about six feet (a deep spot for the river which usually averages 2-3ft in depth). This depth of water coupled with an overhanging tree made it the ideal carp spot. After trickling a little bit of bait an hour or so previous I decided to quickly set up and see if there were any fish about. Within minutes of casting out the rod ripped off and I was finally in to a hard fighting French river carp. 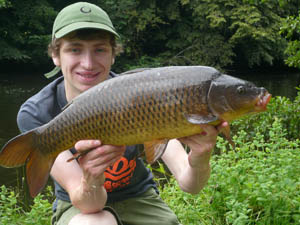 After a lengthy battle the fish was finally slipped over the net, a beautiful long common was my prize so she was unhooked and had her photos taken before being quickly slipped back. At the time I estimated the fish at around 8lb but I would say now looking back it was probably a low double. However, to me the size was irrelevant I was just happy that I had finally had my French river carp!

Sadly the next day we found out a relative had passed away so we decided to come home and cut our holiday short, as it just wouldn’t be right staying out there considering the circumstances. I do feel though that if we had stayed longer I almost defiantly would have had more river carp out, but either way I still managed to get my target of a French river carp and that’s what counts. 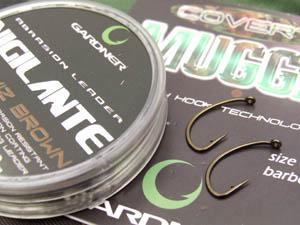 The rig I used was my standard carp fishing setup, but stripped down and strengthened to cope with these powerful river carp. I used a longish length of 35lb Vigilante as my hook length and a size 8 Gardner Covert Mugga hook. This was tied using a simple KD knot without the use of run rings or silicone tubing.