Over the years I have witnessed and to a degree experienced an element of jealousy amongst anglers when somebody has caught a fish. This is something that I personally have never really understood and in my opinion if somebody has had a “result” through quality angling then fair play to them, especially if it is a close friend or angling companion. Believe me I have felt the disappointment when a fish you are in pursuit of gets caught and it may be a fish that only makes an appearance once a year or in some cases even less frequently however, there is a very fine line between being disappointed and being jealous. Over the years I have had the pleasure of fishing with some fantastic characters and friends and when fishing in these situations I am a firm believer that if one of you catches then it’s a result and I have always enjoyed watching other people catch fish. I have recently experienced a session where I had the chance to share a memorable catch with a very good friend of mine. Let me tell you how the session unfolded. 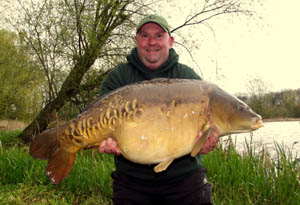 It was a Sunday afternoon and both myself and good friend of mine Ryan Bull had decided to do a night together on our syndicate water, mainly to have a bit of a social and to decide our plan of attack when we travelled to France together a couple of weeks later.

Ryan had done me the honour of coming over to the lake on a cold and wet Monday morning a week prior to the session to photograph a new pb I had landed and also said that it was a pleasure to share a special moment in my angling career with me. Little did he know what was to follow a week later?

I arrived at the lake to find Ryan having a good look around, after another walk around the lake we decided on an area of the lake where we had seen a couple of fish. To briefly describe our swims, in front of me I had a small island to my right which has gravel bars running off either side of it, some marginal trees and I also knew of a plateau that was out in front of me at about 80 yds. Ryan set up to the left of me in a swim known as the Reed Warblers; this swim is situated at the furthest point in the top left hand corner of the lake with the shallows directly in front of it. He decided to cast his left hand rod onto the shallows towards the reeds in about two foot of water and to the left of a snag; his plan of attack was a pop-up in conjunction with a small bag of boilie crumb and a size 6 Covert Mugga at the business end. 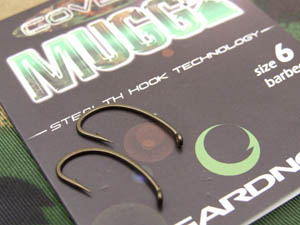 I had just about got all three rods out and was in the process of putting up my bivvy when I looked round and to my surprise Ryan was into a fish, after a spirited fight a cracking common of 30lb 8oz was being photographed prior to being returned to fight another day.

I returned to my swim and carried on putting up my bivvy and Ryan recast to the spot where he had caught his fish and set about putting his other rods out onto two other spots that he fancied. I was probably about half way through pegging out my bivvy when Ryan was in again (he still hadn’t managed to get his other two rods out!) again a spirited battle followed with a few hairy moments and eventually the net was under another nice looking fish, this time a 25lb 2oz mirror. After a few choice words and questioning the colour of his crown jewels I again returned to my swim not knowing that as far as Ryan’s session was concerned the best was yet to come!

I eventually got my bivvy set up and was in the process of putting my bedchair up when yet again the cry of “Rich, Rich, fish on” came from Ryan’s direction. Once again he was into a fish, what a session he was having and we’d only been at the lake for an hour or so! This time a proper scrap unfolded and it was several minutes before we got a glimpse of the fish. In our syndicate there are three known ghosties literally known as the small ghostie, the middle ghostie and the “BIG” ghostie and Ryan was into one of the three. At first it was difficult to see what he was attached to but it soon became apparent when on one last burst for freedom the fish swam away from us and it’s real size could be seen. It was definitely the “BIG” one. I have had the privilege of catching this fish a couple of times, it’s a very special fish and once you know what you are attached to the adrenaline starts to flow and the urgency to get her in the net strengthens the longer you play her for.

After a couple more nerve racking bids for freedom she was ready for the net and once in there the celebrations started, we really couldn’t believe how Ryan’s session was unfolding. On the scales she went 36lb 12oz, to my knowledge her biggest ever weight. We took some pictures and slightly stunned by the catalogue of events Ryan set about recasting to the spot with the hope of finally getting his two other rods out and his bivvy set up for the night. I headed off to my swim to sort a few bits and put the kettle on to make us a well-earned cuppa. When I took Ryan his cup of tea it became apparent that his swim was looking like a fishing tackle jumble sale due to the panic of having all the takes. I left his cuppa on the edge of the wooden platform he was fishing from and left him to get set up. Just as I was making my way back the dulcet tones of an alarm screaming into life became apparent once again.

The previous week the river had flooded into the lake and although the levels had dropped it was a bit boggy to say the least. Prior to the session I had searched high and low for some suitable footwear, all I could find was an old pair of wellingtons with dodgy soles in my shed. Little did I know that in the rush to get to his rods Ryan had kicked his tea over so as I approached in my less than adequate running shoes I was unaware of the tea on the platform. This combined with soles that you might associate with Compo from Last Of The Summer Wine mixed with a bit of mud I proceeded to do the splits behind Ryan as he was playing the fish. It was time to question the colour of my crown jewels, as I’m sure some type of bruising occurred as I slid along the platform and grabbed the net. Fortunately I managed to stay out of the water and even more fortunately Ryan was pretty much oblivious to what had happened due to playing what was starting to look like a decent kipper.

Again a decent scrap developed and after a few minutes we saw the fish for the first time and we both recognised it almost immediately as being the same fish that had beaten my PB a couple of weeks before! It would also be a PB for Ryan so the rest of the fight was watched in silence with the two of us quietly praying to the carp gods that she wouldn’t fall off. Fortunately she didn’t and as I slipped the net under her the silence turned to sounds of joy, as we knew Ryan had landed a new PB. 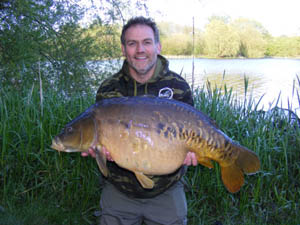 On the scales she went 38lb 8oz, pictures were taken and she was returned, totally unharmed from making an appearance twice in as many weeks.

The big girls don’t come out very often on our syndicate lake, so for both of us to catch the same fish within two weeks and for her to be a new personal best for the two of us was a really rare occurrence. It was good to share the moment with Ryan and a great way of showing my gratitude to him for turning up in some awful conditions the week before to take pictures for me of my new PB. We had both had red letter days and both enjoyed sharing special moments together in our angling careers. Next time you’re out fishing with a mate and they have a result, pat them on the back, shake their hand and congratulate them because next time it could be your turn!