The Universal Language of ‘Carp’…. by Lewis Read

It is always a great pleasure to fish with our sponsored anglers, especially when they are from one of the foreign teams.

Recently we were fortunate to spend a couple of very enjoyable days on the banks of the picturesque Old Lake at Old Bury Hill Fishery in Surrey, in the excellent company of French anglers Ludovic Leblan (‘The Professor’) and David Dauchy.

David De Vere (the owner of BuryHill Fisheries) kindly set aside a short section of bank behind the island so that we could angle near to one another and angling coach and Bury hill guru, Chris Maltby, had kindly applied a nice sprinkling of bait along the length of the island the night before, so with a bit of luck all of us would enjoy a carp or two. 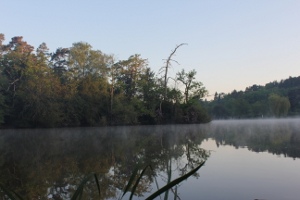 The Old Lake at Bury Hill has a massive stock of quality fish, with a massive head  of doubles and twenties , with the occasional thirty pounder, and though we wouldn’t be fishing for monsters I think each of the four of us were keen to catch more than the others – with the social also being billed as a friendly match…

With the weather being deliciously warm the carp had only just finished their annual spawning ritual the day before we arrived, so it was with a little trepidation that we all picked our plots and starting setting up.  When carp have just spawn you can either struggle for a bite or haul, and it’s never clear until you start angling which way the fishing is going to go, so it was in for a penny in for a pound – get the baits in and see what happens.

The man in the know (Chris) had advised us to fish under the overhangs created by the trees and rhododendrons during the daytime and in the evening, pulling the baits a little further away from theshallow island margin and baiting heavily to stimulate groups of carp browsing the lake bed to feed on our bait.

Somehow or other I found myself in the last swim on the Wimbledon Bank (number 75 I think) and with an inviting snag and a nice bay in the ‘Rhodies’ to fish too I soon had 3 little clusters of Carp Companies finest Ice Reds deposited by the island. 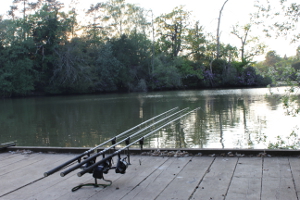 Yes, I admit I was cheating using my bait boat but I made it clear from the outset that anyone that wanted to use it could do so – not wanting to have an unfair advantage over David, Ludo or Martin.

My poor old Technics Bait Boat has seen some action in the past, but had been left largely redundant in recent years as none of the waters I fish these days allow itsuse, so it was quite good fun to bring it out of retirement again!

The obvious benefit of cheating (oops, I mean using my boat) was the lack of disturbance and the fact that I avoided casting into the trees – an occasional inevitable consequence of inching hook baits as tight under the overhang as possible.

To make sure I got the boat back I tied the Kinetic braid from a spod rod to the back and this allowed me to run it under the overhangs without fear of it being wedged by its aerial (a real possibility as it kept going haywire due to a broken solder connection in the flexible aerial – but I didn’t work that out until we were packing up at the end of the visit). 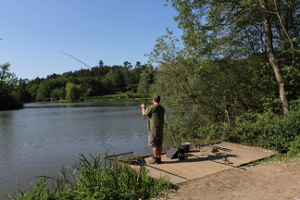 In practice the Mirage fluorocarbon sank like a brick on the way out and the braid floated so there were no problems with the two lines interfering with one another. The other benefit was I wasn’t using batteries running it both ways; pumping the tug back from the island after each drop…

Monsieur Dauchy steadfastly refused to cheat (I doff my cap to him for having morals that I left behind many years ago), and Ludo was a little more flexible in his approach. Martin was happy to punt solid bags with a mixture of groundbait and boilies a rod length or two off the island building activity over his baited area from the ravenous shoals of slabs that homed in on his parcels of bream bait.

Meanwhile in Swim 75 I was fortunate to get a couple of carp bites as we wiled away the afternoon with a delicious meal and a bit of videoing for the French website.  Each fish that was hooked was steadily drawn away from the island margins without any dramas – a fringe benefit from the lower stretch Fluorocarbon maybe- and though the carp battled hard for their freedom, the hook holds remained solid and each fish ended up in the folds of the Outreach net… 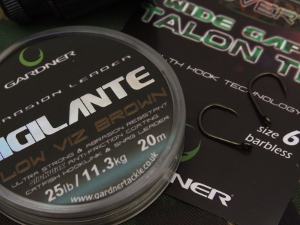 My rigs were really simple – as with the bait boat tangles aren’t a concern – so rigs were simply a razor sharp barbless size 8 Covert Wide Gape hook knotless knot tied onto 12 inches of Vigilante hooklink (the deep brown colour being the perfect match for the muddy lake bed of the Old Lake), with a inline Bolt Bomb and asize 12 swivel gently pressed into the lead insert so it would prick the fish but would separate during the bite.

Hook baits were snowman rigs, these were bigger hookbaits than I would normally use but they were chosen  just to help avoid the bream and so the hook bait would sit above the silt and detritus that naturally builds up in pockets in old estate lakes like this – especially near to islands where leaves and twigs drop from the trees. The buoyancy from the 12mm pop up just counterbalancing the weight of the 18mm bait enough to ensure good  presentation, especially  when combined with a longer hook link. 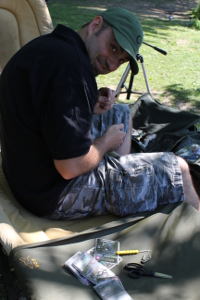 Our guests caught a few bream as well as a Tench, and were understandably very eager to catch an English carp and were really working hard with their rigs and bait placement to do everything possible to make a capture happen, but after a quiet night under the stars (damn why did the carp have to spawn when they did) they were still tinkering with baits and presentations in order to carve out a chance.

As expected the dawn brought the chance of a couple more fish, carp from the end swim (mine!) and a mixture of bream, tench and an accidental pike (!) for the others… 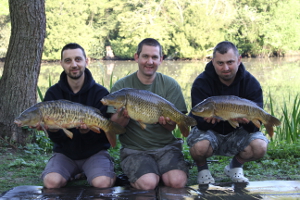 A little more media work was completed in the morning and then it was time for our French friends to head for Dover, a ferry and a return to work the next morning beckoned – I think we were all gutted they hadn’t caught a UK carp each  – but there is always next time.

Strangely the competitive side of the social dwindled out, and by the time I had guided our esteemed guests back to the Gardner residence for lunch there were not any winners or losers. Just the way carp fishing should be really – it was just an immense pleasure to spend some time with guys helping us promote our tackle range in France, on a beautiful lake during wonderful summer weather…

For more information on the fishing available at Bury Hill Fisheries visit: 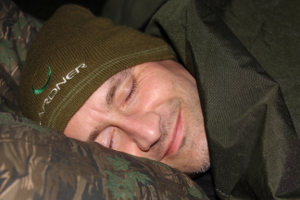