I planned a two night trip to my new water, which had been a tricky of late. I decided to ditch the particle approach as I had blanked for six nights and try a boilie approach. I put my faith back in the hand of my favourite Dynamite Monster Tiger Nut boilies. I found a couple of lovely spots and presented my hookbaits with little disturbance. At 1am I received a very fast take in the pouring rain, which I could not under control. My clutch was set a little lose which enabled the fish to build up some speed and gain sanctuary of a thick weed bed, the fish actually flat roded me on two occasions and the last one unfortunately popped the hook. I was gutted, but after doing six blank nights with corn, tigers and hemp I had managed a bite. 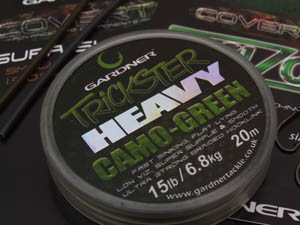 I arrived early on Thursday 14th June to find three people on and it was due to blow a big south westerly. The swim I fancied was taken, but there was a swim free that gave a good view of the lake and also a lot of water to go at. I quickly set up and found some nice areas with the aid of the 1 1/2oz Gardner Flat Pear lead and a old rig with a big hook to test the bottom for clear areas. Once I have found a spot I was happy with, I clipped up, took off the lead and old rig and attach a small Gardner Pocket Rocket.

I introduced about ½ kilo of mixed sized Monster Tiger Nut boilies to each area. My rig consisted of a length green Gardner 15lb Trickster Heavy and a size 10 Covert Incizor with a piece of shrink tube to form a big curve. My hookbait it was a critically balanced 15mm hookbait made by cutting a Dynamite Monster Tiger Nut pop-up and shelf life bottom bait in half to make a critically balanced hookbait.

Once I had got the rods out, I put the kettle on and soon the night was drawing in. I retired around 11.30pm and set the alarm for 2am to see if there were any signs of fish activity. I woke at 2am and made a tea, I stayed awake till 2.45am and with no signs, I soon got back in the bag and reset the alarm for 5am.

At 6.30am, I was on my third tea of the morning when I noticed a fish poke its head out in the corner. I focused my attention on this area and decided if I saw one more then I was going to move. It didn’t take long until I saw another was spotted, so I reeled the rods in and raced round to secure the swim. 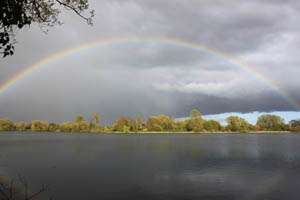 Once in the swim, I sat down and saw a couple more show and I quickly moved the rest of my tackle round to my new swim in no time. I had a good idea of where I wanted to put my baits and with a little 1 1/2oz lead I proceeded to have a cast around. I found some presentable areas and I soon had the hookbaits cast out bang on.

After a couple of hours I started to receive liners and there was the odd sign that there were fish about. I got my head down after dinner as I was due home early. I slept soundly until my alarm on my phone told me it was 4.30pm and I would have to pack away shortly. I was lying on my bedchair and I could not believe nothing had happened, when the middle rod bleeped twice and the bobbin pulled up tight. I put my boots on and went to investigate, the line was tight and clutch was just starting to click away gently. I had learnt a lesson with the lost fish, so my clutch was reasonably tight. As I picked up the rod I bent into a nice resistance and it was moving slowly and hadn’t been able to build up speed, but was kiting to my left on its way to a snaggy corner. I was a little worried after losing what would have been my first carp from my new water, so I gingerly applied side strain and had to put my rod tip under water to avoid the overhanging trees. I coaxed the fish out in front of me and noticed the lead had ejected which helps in weedy waters. The fish rose in front of me and I steered her into the waiting net and she went in first time. 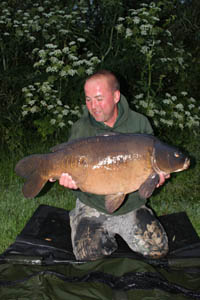 With a huge sigh of relief, I secured the net and sat down to take it all in. I got all the essential equipment ready and positioned my mat on suitable ground and in some good light. With some assistance we got her out and placed her gently on my mat, the hook was 3” back in the mouth. I have noticed this before when using supple hook lengths made from braid. I treated the hook hold with a blob of Gardner Medic Plus and weighed her at 33lb 4oz. I was chuffed and once the photo’s were done she was slipped back to fit another day. 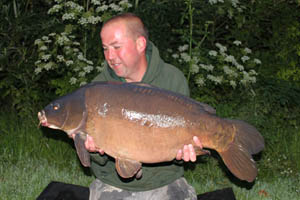