It’s a funny thing working in this trade – you would have thought we would all be out there fishing the whole time. If only!

The reality is that the days are spent primarily in an office dealing with a varied and often high volume of work, and when I do get out on the bank it is normally just for a night at a time. I’m still a bit of keenie at heart and that means managing at least a couple of nights a week  – so I would never bemoan having a wonderful family (don’t tell the wife I said that) or whinge about having a busy full time job here at Gardner Tackle.

Having fished the last season on a water where they never seem to feed at night or weekends, it’s was a breath of fresh air when the spring finally  came along and I found myself heading to a nearby club lake to enjoy a few quick overnighters on a venue where the fish feed at night.

The weed over the last couple of years has changed dramatically – and now there is some weird, broad leafed, thick stemmed species (known locally as ‘Curly weed’) that is making good line lay to spots almost impossible and is an absolute bugger to get the fish out of if they are allowed to move too far on the bite.

Even using the good old faithful chod rigs has been difficult!  Finding areas where a bare lead will fall through the vertical fronds of weed isn’t to hard with a bit of patience, but as soon as a hook is put on the rig it rarely (if ever) reaches the bottom – and when it has I haven’t been convinced that the line lay is allowing the chod rig to sit in a manner that anything but the greediest and most stupid fish would ever think of inhaling!

Of course there was an easy solution to the presentation issues, but it meant breaking down a major mental block I have always had on presentation, and in particular solid bag fishing as a legitimate and effective big fish method. However,part of my duties at Gardner includes dealing with the sponsored angler team and it became clear from the catch reports we receive from the lads that also enter the BCAC and other competitions (namely Tom Oliver and Graham Mabey, Barry and Ben O’Connor and Wayne Rees and Luke Church ) that solid bagging was anything but a small fish method – and that maybe I had been missing a trick!

In desperation to ensure good presentation I grabbed a packet of Mini PVA bags out the Gardner Tackle warehouse and purchased a bottle of Carp Company Hemp Oil to enrich the bag mix I planned to use (another tip gleaned from the team).

This bag mix comprised a few crumbled Ice Red boilies with a mixture of small 2 and 3mm dot pellets that had been left to steep in the hemp oil for a couple of days.  Mmmm – nutty – the aroma from the oil enriched mixture is lovely…

After a little bit of trial and error (its called learning) I found that if I could get the lead to the lake bed without a rig attached I could get a tightly compressed solid bag down too – and by doing away with the marker and spod rod quickly got into a routine of leading around, clipping up, spodding a little chopped boilie and pellet to the clip and then slinging a bag on the spot down to a tee.

Bites started on the new approach immediately, with Enterprise pop up Maize hookbaits that balanced out perfectly against the small but strong size 8 Covert Wide Gape Talon Tips perfectly. The hooklink of choice with this presentation is 3 inches of 20Ib Trickster Heavy – in the new luveeerly ‘silt’ version – and since using it I have suffered zero tackle failures despite having to be fairly heavy handed with the hooked fish in order to get them up and across the weed. 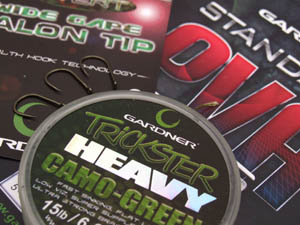 Of course this is helped a little by fishing drop off in-lines, and for this I have been employing the services of some sweet little 2 ounce inline Bolt Bombs.  This means the final bags aren’t cumbersome and heavy, but when tightly packed with a fine mixture the finished presentation is still heavy enough to get down through the weed without a problem.

My last session on the lake was a real red letter day (or in this case night) and having gone through the normal routine I was surprised to receive an evening bite at 9PM, just as my dinner was  cooking over the blast furnace heat of my little Coleman stove.The wind was a cold northerly and the early bite was a bit of a surprise to be honest as I had had a bit of thrash to get the three hookbaits positioned satisfactorily.After a bit of a pull and tug a pretty bland looking mirror carp of 25.12 was landed.

Eager to eat (I like eating!) this wholly unattractive fish was quickly photographed and despatched back to the pond. As I had marked the line with a permanent marker to show the range to clip up at I only had to cast down the margin and wind back until my marker was visible.

Once clipped up, the rig was checked (razor sharp still) a new lead attached and the lot bagged up and sent flying back to the same spot amongst the weed a short distance straight in front of the swim. Luckily the wind had dropped and the cast went in first time, landing with a dull thud as it hit the lake bed. Nice!

At midnight a short series of bleeps alerted me to the fact that another club lake carp had made a mistake, this time on my right hand rod, and soon after a pristine mirror of 20.12 was on the mat. Oh for a photographer as she was small but perfectly formed.

Rig rechecked (still sharp –ouch), re-baited, re-bagged and re-chucked to the clear strip I was soon in the land of nod, damp and cold, but happy to have had a brace of carp!

At first light the ATTs receiver by my head warbled, dragging me from my slumber and with the 15Ib HydroTuff easily doing its job yet another carp was again wallowing into the waiting mesh.  I thought I must be dreaming! This one was a better stamp of fish altogether; weighing in at a very respectable 31Ib 4ounces, and I grinned Cheshire cat style at the result that I’d had. 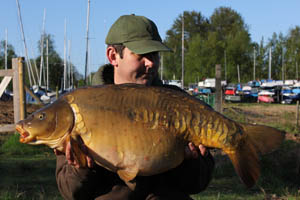 I didn’t want to put this one back without a shot so held it temporarily in the net (luckily I had a spare with me) and hung on until five to ring up the long suffering mate, Leelee Picknall-Claridge, to drive down from Yateley to do me a photo or two. No doubt he will have his revenge on me for this at some point as he catches ‘em!

In the time it took for him to get to the lake another couple of nice scaley twenty pound plus carp had fallen foul of the baited area, with solid bags bringing an almost unbelievable overnight tally to five fish! A couple of 20’s, a 23, a 25 and 31! Happy days… Considering my best spring on there in recent years had been 10 fish captured, landing five in a night was a cracking result. 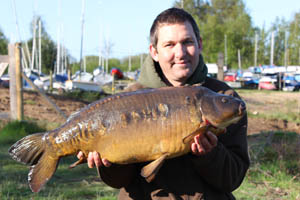 Just as it was packing up time (about half seven in the morning) the only rod that hadn’t had any action so far bent round to the left and a nicely scaled 26.2 came rolling and gulping air over the net cord. Lee roared hysterically that ‘he had never known me catch so much’ (bloomin mickey taker!) and after dealing with the last fish of the night it was time to go home and do the Daddy/husband thing. Well, at least till I had some lunch when I inevitably succumbed to the growing need for some sleep. 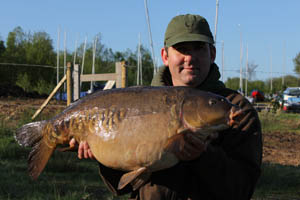 I can’t think of a more successful twelve hours fishing – and with a bit of luck (and finding the fish again) I will have the opportunity to land a few more of these fish if I get to visit the venue again in the coming months.