Everyone melted away and I was left on my own to think about what had just happened. A few weeks earlier I had been in the same swim and caught the Chinese common. I never thought that I would surpass that in my lifetime, but I had and I was in bits.

The rest of that morning flew past in a bit of a blur and just after lunchtime I wound the rods in to rest the swim. I needed more gas and a few other bits so made the drive to Yateley and after replenishing my stocks I got myself back to the lake. When I got back to my swim a mate had decided to set up next to me. Over the course of the next few hours we had a bit of a chat and a good laugh.

I eventually cast the rods back out at about 6pm, all three going back out to the same spots with another half a kilo of the Vor-Tex spread around the areas. A little while later I got a visit from a young guy that has had so many of the lakes big uns over the last couple years. We had a few cups of coffee and a good chat before he departed. As he left he said “If you get it, give me a call and I will come down to help with the pictures”. I couldn’t help but just laugh.

I sat watching and drinking coffee the with the guy next door water, just passing the time. As we looked out at the lake a huge carp came out of the water about thirty yards short of the island, right up to its wrist and silently re-entered the lake. I turned round and said “did you see the size of that”? He had and we both commented that it was mad that something that size could show like that without making a sound.

I don’t know how I managed it but I eventually called it a day at just after 2am. Within a few minutes of my head hitting the pillow I was well away. Things don’t last forever and something woke me up. As I looked out at the rods the left hand alarm latching l.e.d was illuminated and the sky was just starting to lighten.

I was so tired but I fired the kettle up for a nice cup of Gold Blend and tried to shake the cobwebs from my head. The kettle hadn’t even boiled when there was a bleep from the left hand rod, I got my wellies on just in case. A few seconds later that same rod simply rattled off. I turned the gas off on the stove, picked the rod up and tightened the clutch down as the rod arched over quickly.

The carp powered off quickly and it stripped twenty yards of line off my spool in just a few seconds, I was left just hanging on. The fish then amazed me by swimming straight at my swim, which had me winding like crazy trying to play catch up.

It did manage to weed me up for a short while, but I cranked the pressure up and it was soon moving again. As it approached the margins I could feel the slow plodding coming through the rod, which was telling me that it could possibly be a big carp.

It seemed to wake up as it came into the very shallow water and gave a short but spirited scrap on the lakes surface which, had me thinking that it was the lakes big un.
I had noticed the colour of this carps back and knew it probably wasn’t but it still looked like a huge carp.

I made a trip back to the bivvy and got my waders on and made my way out into the lake with the landing net. After a bit of a tussle I managed to net a big carp at the first attempt. I got a bankstick, bit through the mainline and secured the net in the lake for a little while. I got my phone and sent my mate a text saying it wasn’t the one, but it was a bigun none the less and would he mind popping down?

Whilst waiting for my mate to turn up the lad next door got up and asked if I had one. All I could do was point at the net and say ‘yeah and it’s pretty big too. We decided that it would be best to get the carp weighed and as I lifted the net from the water I knew in my heart that it was going to be really big. The carp was placed in the sling, the weigh crook attached and I placed my foot at the base of the pole and waited. Eventually my mate said 49lbs 10oz. I had to have a look and sure enough without a flicker on the needle it was sat at the same weight. Some words came from my mouth but I daren’t repeat them. I was seriously in a state of shock and never in my wildest dreams could I have imagined something like this happening. We secured the carp in the recovery weigh sling in the margins for a bit until my other mate turned up. 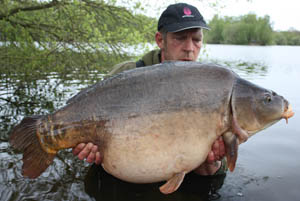 A short while later we were once again hauling my new personal best for a mirror from the lake a carp that was identified as Scruffy Bob.

The camera came out and loads of pictures were taken before a few return shots were done. It was time for the lake to reclaim its resident and I watched as the carp slowly sank away into the margins.

I thanked my mate for turning up to do the pictures. He then asked to have a look at my camera to try and identify the common I had caught the previous morning. He looked and just said “It’s one of the rare one’s mate, The Small Tailed Common”

Loads of coffee’s and a few beers were drank that day. I fished until the next afternoon, but I didn’t get another chance even though the carp were still about.

I packed up and made my way round to the van. I drove home in a bit of a daze knowing that I had just had the session of a lifetime!