The plan was to get home, have a quick shower and pick up some boilies before making the hundred mile journey down to Wellington Country Park in Berkshire. It was whilst driving on the M4 that I got a text from a friend telling me he had a 44lb mirror in the sack and that I should hurry up. I wasn’t that far away and some forty minutes later pulled into the syndicate car park.

The barrow was loaded up and I made my way round to my mates swim. On the way round I left my barrow in the Wides swim and carried on round to the Grassy to do the pictures for my friend. My eyes nearly popped out of my head when I saw how big it was, very short deep and very broad across the shoulders, it was a cracking looking carp that’s for sure. After the carp was returned the kettle was fired up and we had a good chat and I was to learn that there had been a few good carp showing around the area over the past couple of days.

I made my way back to the Wides swim, where I had caught a few carp from recently.
Due to the inclement weather I got the camp set up first. On my way to Welly I had made a detour and had picked up another spool of Gardner Mirage. I got the rods out and re-spooled the spool that had been ruined. 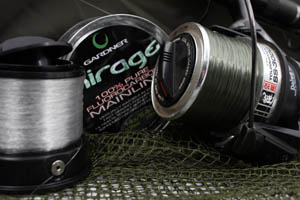 All the rigs needed to be changed over, and I sorted all three rods out with a metre of lead core. Two little hinged stiff rigs were made up with size 5 Gardner Covert Chod hooks. 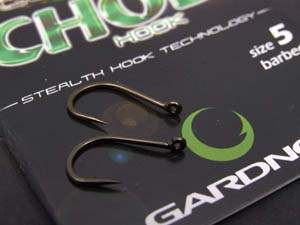 The third rod was set up with a little rig that I am playing around with at the moment. My hook bait choice was the awesome Peach & pepper 16mm pop-up. One rod was cast at 85yds towards an island, a spot that has produced a couple of good carp to me in the past. The middle rod was cast slightly further right into a silty gulley. The third rod had a small pva stocking of ten boilies attached to the rig before being cast to a spot at seventy yards.

I scattered half a kilo of 16mm Sticky Vor-tex over all three rods and went back to the bivvy to get the kettle fired up for a much needed coffee. During the course of the next few hours I saw three carp show in the area which certainly boosted my confidence. It was whilst trying to find my lighter that I came across the penny that I found at my Bedfordshire venue, it had been joined by a fifty pence piece. I put both coins into my hand and hurled them into the lake making a little wish as I did so.

By eleven o clock I could take no more and had to get some sleep as I had only had about six hours sleep over the last couple of days. My head could have only hit the pillow for a few minutes before I was sound asleep. I was awoken a little while later by a couple of Egyptian geese that had landed on the lake, Christ those things make an awful noise. I checked my phone and it showed that it was almost 1am. I was just drifting off when I heard a couple of bleeps, I opened my eyes and saw that they had come from the left hand rod.

A few seconds later that same rod simply tore off, I got my boots on and got over to the rod pretty quick. When I picked the rod up I was shocked at the sheer power of the carp and could only hold on and watch as it stripped line from the clutch. I tried to gain line but every time I applied pressure the carp would just power off taking line from a pretty tight clutch.

Some fifteen minutes after hooking the carp everything locked up. I tried cranking the pressure up and really laid into it but it just wouldn’t budge. I put the rod back down in the rests and legged it around to the hole in the bush where the boat was tied up. I also gave my mate a shout and told him I needed his help.

We soon had the life jackets on and made our way back over to my swim. Being out in the lake in a boat in the middle of the night was very spooky and couple that with a strong wind which did a good job of blowing us all over the place. I was relieved to at last get to my swim and picked the rod up.

We were soon making our way out to where the carp was. I was gently pulling on the rod whilst my made slowly got us closer with the oars. I couldn’t feel a thing through the rod and was unsure if the carp was still attached. As we got above where we thought the carp was I increased the pressure on the rod and at last felt a couple of kicks from the fish as it started to move. We were getting pulled all over the place and I couldn’t do a thing with the carp as it showed us who was king in his environment.

I had the rod bent over when a big ball of weed appeared on the surface and my partner in crime reached over and pulled it all off my mainline. The carp just did not want to come in and as we both sat in the boat doing battle with an unseen monster we heard a few bleeps coming from my mates swim. What could we do? I just said sorry mate and carried on trying to get the carp on the surface. It was like trying to pull a breeze block up that was being used as a plug.

Eventually the carp started to tire and I felt we were getting the upper hand. It took another ten minutes before a huge carp appeared on the lakes surface and at last managed to get the carp into the net. We made our way back to my swim as quick as possible as his alarm was still letting out the odd bleep.

As soon as we beached the boat my mate was off to his swim. I secured the net over the side of the boat before getting everything ready for weighing the fish. As I bit through the line and lifted the net I knew that I had a very big fish and struggled up the bank with my prize. It wasn’t until I had the carp on the unhooking mat that I realised that it was a bloody great big common. I unhooked the carp and got it in the weigh sling and as I hoisted it up onto the scales I watched gob smacked as the needle settled at 48lbs 3oz a new personal best for a common. Did I let out a little whoop? Damn bloody right I did.

I got a sack out and gave it a good soaking before transferring the carp into it. My swim wasn’t deep enough, so I got the carp into the deep margins of the swim next door. After making sure the carp was safe and secure I got back in the boat and made my way back over to my mates swim. His run had been a tench thank the lord. We once again beached the boat and my mate fired up the kettle for a well-deserved brew.
When I told him how big it was he just let out a slow whistle and said “bloody hell this place is nuts” and I couldn’t disagree and just smiled.

After the coffee I got back round to my swim and checked that the carp was okay. I tried to have a sleep but I was wired and couldn’t. The next few hours were spent listening to the radio and drinking loads of coffee. We had arranged for the pictures to be taken at about 7am, which seemed like ages away. 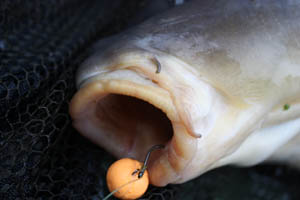 It was whilst sitting there that the right hand rod alarm let out a couple of bleeps before one toning. After a short scrap a common was waddling in the folds of the net.
It’s nice when trying out a new rig to actually catch on it and this was my second carp to fall for it in the last couple of weeks, so it obviously works. The hook holds are something else.

Shortly after the capture one of the other members turned up and he volunteered to take the pictures of the carp I had just caught, a common that had weighed in at 26lbs 14oz. I couldn’t help myself and just smiled for the pictures before getting the carp back in its home. 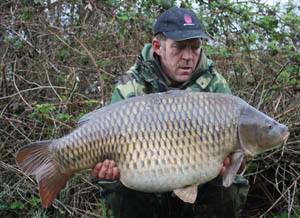 As promised my mate turned up to do the pictures just after seven. We were both blown away as I revealed my prize from the sack. The camera clicked and whirred for an age before I bent down and gave the huge common a kiss on its head before releasing it from my grasp back into its home. I need to thank Ronnie for taking the pictures, seeing him laying down in the mud doing the return pictures blew me away, so cheers mate!