In the past when fishing this lake, I have usually wound the rods in and given the swim a rest for a few hours with no lines in the water. The conditions looked so good that I made the decision to leave the rods out and put another fifteen spods of my mix out to the area along with a few spods of the Sticky Krill and Vor-Tex pellets.

I went back up to the top of the swim and once more sat on Steve’s bench and carried on watching the water. An hour after finishing the spodding a good fish showed to the right of where I was fishing. They were still about and I hadn’t spooked them from the area. Shortly after this, the left hand rod let out a few bleeps which had me scrambling down the bank to the rods. As I stood there the alarm on the left rod let out its scream before the spool on the reel started to spin.

I reached down picked the rod up and tightened down on the clutch and couldn’t help but start laughing as the rod took up its fighting curve. The carp had once again taken enough line to get down the back of the bar. I walked up to the top of the swim and increased the pressure somewhat and managed to coax the carp over the top of the bar which made things easier.

Once the carp got near the margins it woke up and seriously tested the hook hold to the limit. It was something else watching the carp twisting and turning in the deep crystal clear margins. I was just happy that the carp was tiring itself out to the left of the swim as there is a very bad snag down in the depths of the right side. Slowly but surely it started coming up through the water however, it still had enough in reserves to have a bit of a last minute dash for freedom, before breaking the surface where I rather gratefully managed to safely net it.

I had a quick look in the net and at the width of the fish it looked like another good sized carp. After my mate turned up, we got the carp into the weigh sling and I watched as the needle revealed a weight of 33lbs 12oz. I certainly had a smile on my face for the pictures, as this was turning out to be a fantastic session. 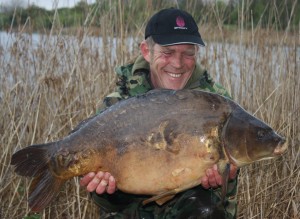 After treating a few sores on the carps flank we got it back safely into the pond. I quickly got a fresh hook bait attached and sent the rig back out to the spot, which was shortly followed by a few more spods of Krill and Vor-Tex pellets. Less than twenty minutes later the middle rod rattled off. Things went well and a few minutes after hooking it a nice sized carp was milling around just below the surface in the margins. As the carp broke the surface for the first time it was scooped up in the waiting net. My mate turned up to lend a hand and we settled on a weight of 30lbs 8oz before rattling off a few pictures. 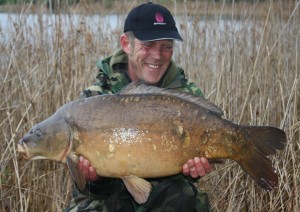 I don’t mind admitting that I was positively buzzing, things had gone mental.
Another bait was attached and the rod was cast back out to the area. Twenty minutes later the right hand rod screamed off and as soon as I picked the rod up I knew I was attached to a big carp. All I could feel was this steady plodding coming through the rod. The carp managed to find some weed and I had to really bend into the rod to get the fish moving again. Ever so slowly I started to gain line and some fifteen minutes after hooking the carp I had it in the margins. I then noticed a small clump of weed on the mainline and juddered the rod to try and get it to slide down the line. Shortly after this the carp had a brain storm and seriously tried to pull my arm off. Whilst the rod was well bent over the line suddenly parted. I knew I had just lost a very big carp and a few choice words came from my mouth. I reeled in the slack line and upon checking it I found that it was seriously frayed where the weed had been running through it.

I set about stripping some line from the spool however, before I could get the rod set up I had a take on one of the other rods. The rod that had been recast rattled off and after a short fight a nice looking carp was safely within the confines of my landing net. A cracking mirror that pulled the needle on the scales round to 30lb 2oz after a few pictures we soon had him back in his home. 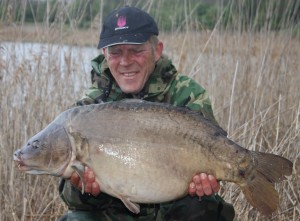 This session was crazy and the smile that was on my face stretched from ear to ear. I put another lead on the rod and cast it back out to the area, followed by another couple of spods of my mix. I finished setting the other rod up and got that back out there too.

A few hours passed before the next take came at nearly 7pm. I had been joined by three other syndicate members and there was a fair amount of banter going on as I played the carp. Things eventually settled down and after a bit of a tear up in the margins a fair sized carp was netted. With plenty of hands around to help the carp was weighed and came in at 32lbs 3oz, I was in dreamland and couldn’t help but smile for the pictures.

A fresh bait was attached and sent out to the area and I topped the swim up with a few more spods, hopeful of some more action. Over the course of the next two hours I landed two more carp that went 29lbs 5oz and 31lbs 5oz. 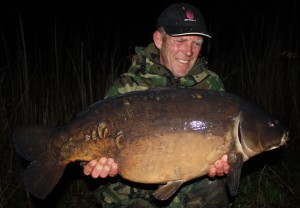 The final carp of the session came just before 10pm a nice mirror that pulled the needle round to 33lbs 13oz. 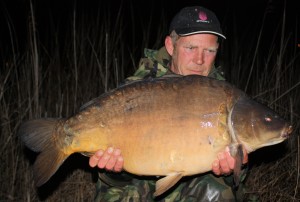 After the last carp I topped the swim up with a few more spods of my mix, hopeful of a bit of action during the course of the night. I managed to stay up until almost 2am before calling it a day however, sadly no further fish materialized. Whilst sitting on Steve’s bench that morning I found a penny in the wood chippings and put it in my pocket.

Shortly after this I was packed up and loading the van up with my gear by half nine. The plan was to get home, have a quick shower and pick up some boilies before making the hundred mile journey down to Wellington Country Park in Berkshire….