Well, where should I start? What a month April has been weather wise. It seems that since the announcement of a hosepipe ban across many parts of the country the weather has lived up to it’s April showers reputation and a whole lot more! According to the news last night there has only been one day in any given place that has escaped the heavy rain we have been experiencing. Even Billing Aquadrome that is just up the road from me has been evacuated due to heavy rain in the fear of the local River Nene bursting its banks onto the land of this leisure park and past time carping Mecca.

April has been a busy month for me with some reviews to be written for the UKCA website and some serious fishing to be done on my syndicate lake. A charity fish-in was organised by Ian Ayres and preparations to be made with regards to a session with Allan Parberry and the two Editors from Carpology/Maximum carp.

On the fishing front I had a remarkable session at my Private Syndicate water recently. It was to be my third session of the current campaign, which had produced one fish so far. On arrival I did a circuit of the lake and immediately found some fish in an area where I had half expected them to be.

As I was setting up a fish stuck its head out next to a snag on the shallows so I decided to put a single bait on it. Within seconds (I hadn’t even switched my alarm on) I was in and after a decent scrap landed my first fish of the session, a nice looking 23lb mirror. After this the swans became aware of the “shallow” area I was fishing so I decided to move this rod to the bottom of the shelf just “off” in the deeper water. This was fished using a single Mistral baits i40 Red 20mm boilie tipped with a piece of black fake corn over 100 freebies. 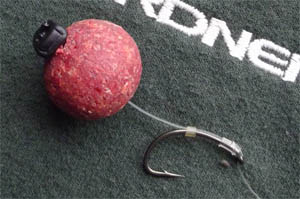 As always my rig consisted of a simple set up using one of the new Gardner Covert Continental size 4 Mugga hooks tied knotless knot style to some Subterfuge Supersoft hook-link material. The only thing different to normal was the fact I was using a running rig, one that I have been experimenting with ready for my trip to Moorlands Lake in France at the end of May.

The second rod was cast to a plateau at around 80 yards, this time using a single 20mm Mistral baits 20mm Rosehip boilie. This was tipped off with a piece of fake orange corn and around 200 freebies were put loosely around the area. I always keep some Rosehip boilies in my armoury at this time of year, it is a fantastic bait when the temperatures are still way off the summer ones and fish are still waking up. Another bonus is that the bigger fish on my syndicate lake seem to like it. 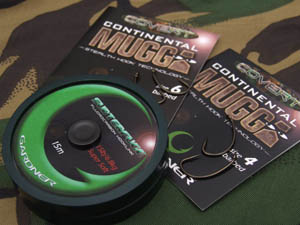 The third rod was cast around 40 yards to the back of a gravel bar using the same hook bait as the first rod again with around a 100 freebies. My second and third rods were also fished using a simple set up consisting of a size four Gardner Covert Continental Mugga hook and Subterfuge Supersoft Hooklink material the only difference being the use of inline leads as apposed to a running rig.

After weighing and photographing the first fish I did manage to get all of the photos I needed for the review products which I was pleased about because once dark and throughout the night the weather didn’t disappoint with extremely heavy rain and high winds. 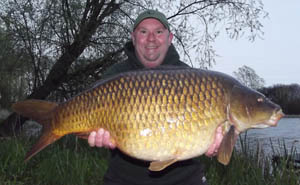 At 5am the following morning the rod cast to the plateau produced a one noter, which resulted in a cracking 32lb 4oz common. I left the fish in the net to recover and set about putting my rig back on the spot with a few more freebies.

By now the winds had become extremely strong and it was pouring with rain but I was a very happy angler having landed my first thirty of this year’s campaign. Little did I know what was to follow? Within ten minutes of weighing and photographing the fish the same rod was away again and after a sluggish fight with what seemed a heavy fish I landed a cracking mirror of 38lb 10oz which is a new U.K personal best. 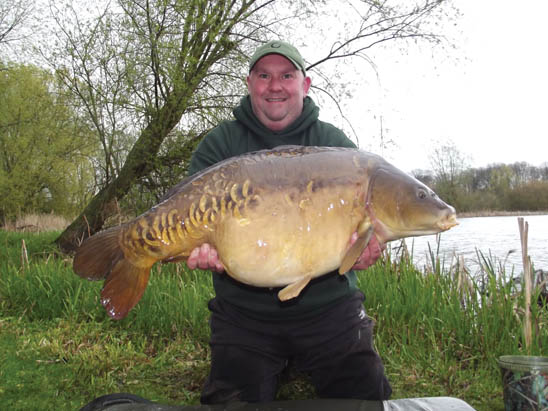 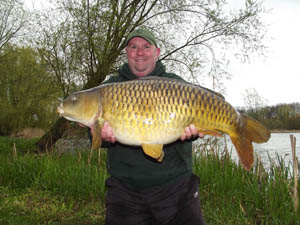 At 7.30 am the rod cast to the back of the bar was away and this resulted in yet another thirty, a lovely common of 30lb8oz.

Despite the horrible weather and the fact I was soaked through and covered in mud and slime I headed for home a happy angler with a four fish haul to my name. This consisted of a twenty and three thirty’s all landed within the space of a couple of hours and a new personal best to boot.

After my incredible session it was back to work for a few days and then preparations needed to be made ready for a charity fish-in event I was due to attend at Lovells carp Lakes in Peterborough. Once again the weather wasn’t looking too promising and I headed for the event hoping it wouldn’t be a complete washout. On arrival I was greeted by event organizer Ian Ayres, who was still busy organising things, so I handed over the raffle prizes that my kind sponsors had donated and proceeded to walk around the lake and meet the other anglers who were fishing. The event was a huge success with the general feedback being good. Julian Cundiff attended on the Saturday giving an interesting talk to the lads fishing and offered help and advice.

There was a bbq (despite the weather) and a creditable £366 was raised for the charity “Get Hooked on Fishing” an organisation that deliver fun and interactive training around the sport of angling. Despite the awful weather the event was a huge success so hats off to those involved with organising and their help over the weekend. 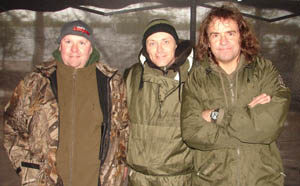 After the charity event it was time to head home, have a day with the family and then make some preparations for the session due with Allan Parberry and the guys from Toffee Publications. With the weather the way it has been, something had to give, and unfortunately after several telephone conversations it was decided that the session would be cancelled due to the chosen venue being flooded and travelling conditions not being very good. Hopefully this will take place in the not too distant future when it has finally stopped raining!

All in all April has been a successful month apart from the weather finally putting paid to one of the planned events but I suppose two out of three isn’t bad. On top of that I had an incredible session during which I landed three thirties one of which was a personal best. Try and enjoy your angling and tight lines for when you do manage to get out on the bank next.