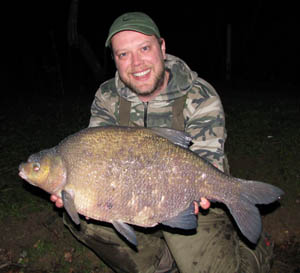 With the spots now properly ‘rocking’ as the carp boys say, it was fill your boots time. My total so far has included 8 double figure bream to 13lb 8oz with a few backup 12’s and 11’s to boot. The rest of the fish were made up of the next size class down, fish in the 8lb to 9lb bracket. Big male fish covered in tubercles were accompanied by big plump females around the same size. 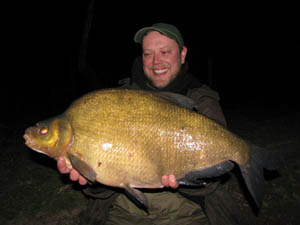 It was only a matter of time before a really big female on her way to the nest would make an appearance, so we stuck to the plan. However, this was all to change one fateful weekend with a drastic change in the weather. Storms and torrential rainfall were set to batter the south of the country, which was not off putting in the slightest thanks to modern waterproof materials. However, my bivvy thought otherwise as I broke 3 of the ribs during a night that can only be described as biblical in it’s ferocity. Oh how Alan laughed!

Trees were down, roads were flooded, and I was getting multiple bites as the fish were hurling themselves up the bank. Getting the baits back out the 100 yards or so proved a bit tricky what with the cross wind, and said wind also caused me to lose a carp that decided it wanted to be the other side of a snag bush to me, with the line dragged down the lake and weed festooned along it like a washing line. Oh well. Alan managed a couple of bream during the worst of the weather, but it was not until later in the morning we realised something was amiss. The level was up a good couple of inches from the previous day, and sure enough, the lake was steadily rising! 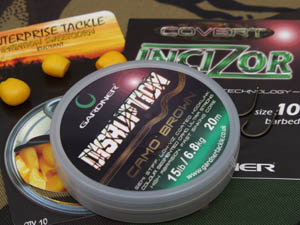 Beating a hasty retreat to the warmth and dryness of home, I returned the next day and put the baits back to the same spot. The weather had calmed down considerably, and the warm sun on by back reminded me that this bream campaign was only another transition to the next mission. During that day the water rose anther foot, and within 36 hours my swim was submerged with 6ft of floodwater, rendering fishing impossible and pointless. Needless to say I have endured another couple of blank nights since, but what a few sessions we had! With carp and double figure bream falling to both of our rods, success was mild but welcome, and proved we had done something right.

So what had we done right? Finding a clear area to intercept the fish was one thing, another was the liberal use of quality bait introduced regularly. Concentrating the bait around the hookbaits whilst fishing with a scattering of bait in the peripheral area definitely paid off. As did spodding out groundbait mixed on the dry side to create random patches of taste and smell in the water. All of these tactics combined with efficient rigs and end tackle, quality hookbaits and strong sharp hooks meant that I could build on the lessons learned and go on to my ‘proper’ spring water with great confidence. Watch this space!