Hauling at Elstow – Part One by Ian Stott

As a Ground worker/ Landscaper all my work is outside. I have been lucky over the past few weeks with the jobs I have been doing and I have managed to keep working and earn a wage, even with the inclement weather. Last week though I had to admit defeat and call it a day, it was just too wet to be able to do anymore.

I had another little job that could possibly be done, but that was dependent on my mate getting a phone call. As I left the yard on Tuesday the 1st of May I was told that if I hadn’t heard from him by Wednesday afternoon I was free to do as I pleased. This meant that I may possibly be able to do a bit of fishing. Wednesday soon came around and I waited as long as possible, until about 2pm, before sending my mate a text saying “sod it, I am going fishing fella, give me a ring as and when I’m needed”.

A quick check on the computer for the weather and air pressure had me chaffing at the bit to be at my local Bedfordshire syndicate. I soon had the van loaded with all the gear and a spare change of clothing as it promised to be very wet over the next couple of days. The air pressure had dropped through the floor and was something like 970.

Things didn’t quite pan out the way I wanted them to, which meant that I didn’t get to the lake until almost five o clock in the evening. As I stood in the car park swim watching the lake, the wind was rather strong and coming from a northerly direction.

I could only have been there a couple of minutes when I saw a carp crash out at about ninety yards straight in front of the swim I was standing in.

After watching the water for a further twenty minutes I decided to go for a walk around the area where the wind was pushing in. I soon came to a small bay that the wind was really hacking into. As I looked down into the snaggy area below me I could see that the water was really coloured up quite a long way out from the margins. There was obviously carp around and I carried on with my walk.

An angler was present in the next swim I came to, and as I looked at where his rods were positioned I knew fishing the swim next to him towards the coloured water was out of the question. Whilst standing there for a few minutes, I saw another couple of carp show in roughly the area that I had seen one earlier.

I made my way back around and started getting my camp set up in the car park swim. I was lucky and managed to get everything set up without getting too wet.

The marker float was fired out at about the ninety yard mark and as I slowly retrieved it I felt the lead bumping up the bar. As soon as I felt a clear area I popped the float up and found it to be twelve and a half feet. I made a mental note of the position of the float in relation to the third and fourth trees that were on the far bank.

Next on the list was to make up my spod mix which consisted of a jar of Sticky Oily Hemp, five kilos of whole and chopped Sticky Vor-Tex boilies and six tins of sweet corn. I would also be using Sticky Vor-Tex and Krill pellets, these however would be spodded out on their own.

The spodding went quite well even with a big cross wind and some forty minutes after starting I had put out nearly half of my bucket of spod mix and twenty spods of mixed Vor-tex and Krill pellets. That was enough for now and should I happen to get any action then I would top the swim up periodically. 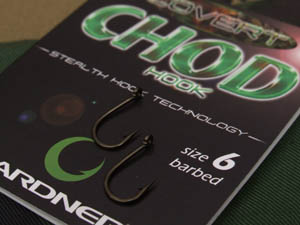 Having fished the lake regularly in the past I sorted the rods out with my favoured rigs that had worked well on previous sessions. The hooklengths consisted of fourteen inches of 25lb hooklength material, coupled with a size 6 Gardner Covert Chod hook which was made up into a Johnny Mac rig.

A 16mm Sticky Vor-Tex pop-up was my chosen hook bait. A lead clip coupled with sixteen inches of heavyweight tungsten tubing, and a 5oz distance lead completed the set up.

All three rods were cast out to the marker just to mark the lines up with pole elastic, which would make it easier to get back out to the same spot should I happen to get a carp. Due to the distance I was fishing and the difficult cross wind, I decided to reel the marker float in as it would only hinder trying to position the fishing rods. There were four trees on the far bank and my float had been in between the third and fourth trees. The first rod went out to the third tree, the second in between and the third went out to the fourth tree, it took five casts in all to get them right as it was a pretty tight area.

Everything was set and it was just a case of waiting now. I got the kettle fired up and made a nice cup of Gold Blend and went and sat on Steve’s bench, which is situated at the top of the swim. This area gives a good view over most of the lake and it was whilst sat there that I saw a further five carp show over the course of the next few hours, which had the confidence levels soaring.

A couple of hours after it got dark the heavens decided to open and I made my way down to the comfort of my bivvy. After numerous cups of coffee I decided to call it a night and got my head down at around 1am for some much needed sleep. However, sleep was hard to come by though as the rain was absolutely hammering down on the top of the bivvy.

Just before 4am my left hand rod let out a few bleeps and as I looked out at the rods and said out aloud “don’t you bloody dare”. I shut my eyes once more and a couple of minutes later the same rod let out a few more bleeps before turning into a one toner. I grabbed my boots and shot out of the bivvy to the offending rod. As I lifted into the carp I was kind of shocked at the lack of resistance and I guessed that the fish had dropped down the front of the bar into the deeper water. The fight was pretty one sided however, as it neared the deep margins it seemed to come alive and put up a short but spirited fight before slipping over the drawstring into the waiting net.

For some reason I didn’t have my remote with for my camera and ended up going to round to see the lad I had spoken to earlier to help with some pictures. We weighed the fish and at 24lbs 8oz I was happy to be off the mark so quick. After a few pictures the carp was released and I said my thanks to Paul for his help.

A fresh Vor-Tex pop-up was attached to the rig before getting the rod back out to the area.