George Day – Carp Fishing on the Syndicate ‘proving a point’

After around 2 weeks of blanking on my syndicate water I have finally managed to get amongst some fish. My first productive session produced a lovely little mirror of 16lb, unfortunately this was to be the only fish of a short 24hr session. 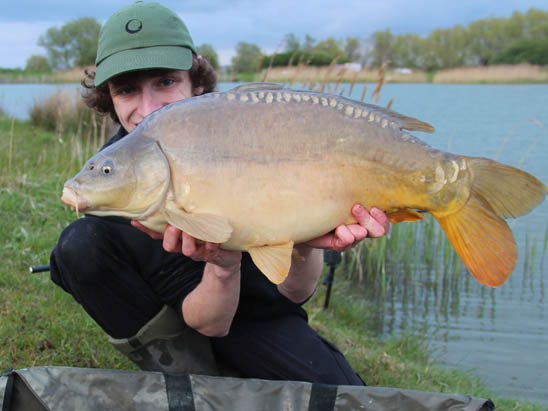 A week later I decided to return to the water, feeling sure I had ‘cracked’ what the fish wanted. A single Vision Baits Liver and Garlic bottom bait and a Citrus Fizz pop up (snowman style) was cast out after adding a little Micromesh PVA bag, towards a showing fish on the far side. Within minutes that rod roared off and I was into a hard fighting mirror and after a lengthy fight the fish finally slipped over the net. A good fish tipped the scales round to 24lb and after a few snaps the fish was returned.

By this point the fish had stopped rolling on the far side, but I decided to still put the right hand rod out there just in case the fish were to move back over the spot during the night. 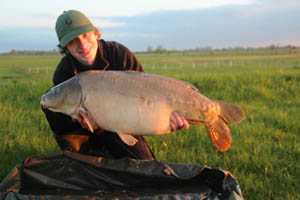 The night came and went and I was woken up at about 5:30am by yet another screaming run. I stumbled out of my bivvy and into what seemed like a picturesque, ‘but cold’ painting. The water was flat calm the sun was just peaking above the fenland skyline turning everything a shade of dim orange. The silence was only broken by the subtle ticking of the clutch and a distant cuckoo occasionally breaking silence to project it’s typical spring call. After many sudden lunges I finally managed to coax the fish into the net. It looked big in the water and I gave it a rest in the net while I set up the mat and photography equipment. However, although I thought it was big, I was very surprised that once on the scales the needle span round to just over 31lb 8oz. A beast for the water and only my second thirty!

The last few weeks have taught me the sheer importance of not only getting your rigs right but also why blanking to me is not always such a ‘bad thing’. I feel that with the lack of fish often comes a vast amount of added knowledge on how to present your bait, where and how to fish next time you approach the water. 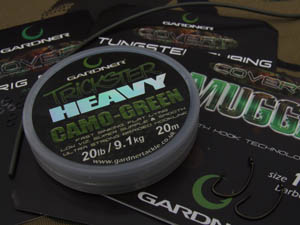 In all my fishing I like to keep things simple. My rig consisted of five inches of 20lb Camo Green Trickster Heavy and a size 10 Covert Gardner Mugga hook. These were tied using a standard knotless knot with a small Covert Rig Ring added to hair, which sits on the bend of the hook, allowing the rig to act as a ‘blow back’ style rig. A 3oz Gardner Flat Inline Pear Lead and a 3ft length of Covert Tungsten Tubing were used to pin the line to the lakebed.

George Day is a You Tube star and a new recruit to the Gardner Tackle Team. To find his latest informative video on the session above, including great footage of a fish weighing over 31lbs, please click on the link: https://www.youtube.com/watch?v=W3gUgjk7cAE