For most of March and April I’ve been getting right into my perch fishing and for the moment I’ve not been doing much carping.

After my last session perch fishing, when I caught the 3lb 8oz, I was eager to get back to the same lake and try for some more big perch. I planned to do a 24 hour session because the best time to target perch is in the evening, just before dark, and early in the morning (or so I was always lead to believe). That’s when they’re out of their hiding places and on the look out for food. The gate to the fishery is closed at 7pm, so by doing a 24hr I thought I would fish into darkness and see what happens.

I managed to get a day’s holiday so I phoned the lake and said I would be coming after work. Later on that day and with the work all done I got home, loaded my car with the fishing gear and headed for the lake. It’s not that far away and in no time I was pulling into the car park; there were a couple of cars which was a good sign. I quickly grabbed some of my kit and walked to the lake. There’s a really good corner swim, it’s nice and snaggy, and it was free! I dumped my gear off in that swim and then went to get the rest, as soon as I got back I started feeding maggots little and often to get the silver fish active, which in turn would hopefully get the perch interested. 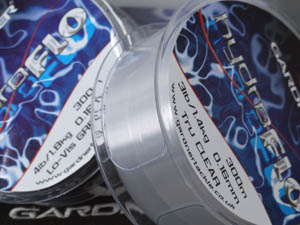 I intended to float fish with just one rod (using a starlight after dark) and my hook bait was prawns. All set up, I flicked the float out then put the kettle on for a cuppa, even before the kettle had boiled my float slipped under and I struck, the way it was taking line this was no perch and after a good fight during which the 6lb HydroFlo didn’t let me down, I slipped the net under a mirror carp of about 10lb. It was a nice fish but not what I was after; I thought what with all the splashing about my swim might have been spooked. So before casting out again I had a nice cup of tea and a smoke. 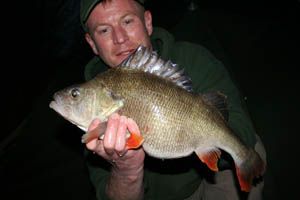 After tea I cast another prawn hook bait a rod length out. I could see there was a lot of activity all over the lake and it seemed to me that the carp had woken up but still no signs of perch. It was getting dark so I reeled in and changed the tip of my float to a Starlight tip, the type you crack and shake. With the bait cast back out I waited. It was about 8pm when my float dipped then went under, as I struck the rod I connected with a fish that felt more like the species I was after. Yes! It was a perch and a big one at that, I popped it in a plastic bag and it weighed 3lb 4oz. What a result!!

I set up my Gardner 50” Outreach Landing net and positioned it in the margins a couple of swims down then put the perch in there while I went to get help with the pictures. With all the photos done I slipped her back, but not in the swim I was fishing as I did not want to spook any perch that were still in there. 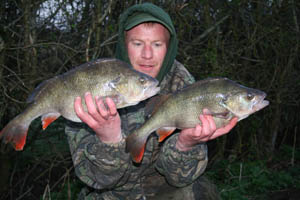 I fished on until I couldn’t keep my eyes open. It was about midnight but in that time I had caught 7 perch all over 2lb and the biggest being 4lb. This to me was strange, to catch perch so late well into darkness. I guess you don’t know till you try. I put the two biggest in my carp net where they would safe and sound till first light so I went to sleep and woke at 5AM. The same fella came round to help me with the pictures then I slipped them back, happy days!