It is an exciting time to me, when the days begin to lengthen and the promise of spring is on it’s way. I’ve always found March to be a good month for captures, even the last couple of years, after the savage winters that we had. However this year was different, as this winter hadn’t been a bad one (apart from those couple of weeks in February) so with that in mind I booked some time off and eagerly prepared my kit.

Firstly I had a day at the 5 Lakes show, which was probably the busiest show day I had seen for a long time, and was good to catch up with some friends, which all in all made it an excellent day. I had also heard that my local lake had produced a few fish to the one member who had fished it during this winter. A great result as the lake had been difficult enough during the summer. In fact the week before I was due to start he sent me the pictures which included some fantastic fish in true winter conditions.

This was more than enough to fire me up, so I began to take a few walks round, with some bait, in the hope of getting in tune with the place. I had been down for a few single night trips since the beginning of January, and had been lucky enough to have had some action. It was immediately apparent on my return that the prolific weed that had filled the lake last summer was still there, as I could see dark patches of it extending from the margins way out into the pond. Even the previous 2 cold winters hadn’t killed it off, so I knew what to expect after the last one, but I could also see the loads of horrible silt weed covering the top of the Canadian where it had sunk down. This proved to be a problem on my first trip, as on retrieving every cast I was finding the rig covered in this silt weed, and I had no confidence fishing in it.

What made it hard was I would often cast out a lead to get a good drop on hitting the bottom, but when I tried to pull back it would be well and truly embedded in this weed. It was obvious the lead was going through it to the bottom, but I wasn’t actually hitting anything that was clear. 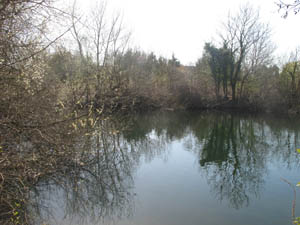 After an uneventful session in the main lake, I took the boat out and had a good look. The fish on here are not tolerant of the boat, so I’ve tried to use it less and less. However as I was leaving anyway it didn’t matter, and although the water had a brown tinge to it I learnt a considerable amount about the make up of the bottom in a short space of time. I didn’t see a fish at all though, until right at the end near to where we keep the boat chained up. In the snaggy corner I saw a good fish, only one though, but it was enough to convince me where I should be concentrating on. The middle of the lake looked dead, but this area of snags with the sun on looked really promising. It was also sheltered from the cold easterly winds that were prevalent. I had a drift over the spots I had fished the previous week when I had done a blank night in there, and was disappointed to see that they hadn’t come clear at all, in fact they were covered in that light green mass of silt weed.

However I had a bit of luck, as I peered down, I saw a lovely clear patch close to the snag tree, but some 3 feet closer in than I had been fishing. Even though the water wasn’t crystal clear I could make out a round brown coloured patch about the size of an unhooking mat. It wasn’t big, but as it was only an underarm cast from the bank it wasn’t going to be too hard to hit. I dropped about a kilo of Essential B5 boilies on to it, and couldn’t wait for a return after the weekend. Apart from that one fish I didn’t see anything else, but that was one more than I had seen anywhere else, so as I locked the gate I was already hatching a plan for the next trip. 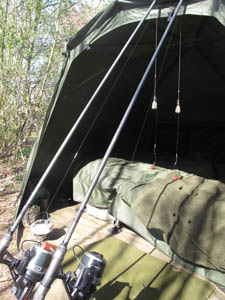 One area I was confident with was my rigs. I have one standard blow back rig for all of my bottom bait fishing, made up with the king of hooks, the Mugga in size 8 or 10 depending on the weed; but for my pop up fishing I only intended to use the hinged stiff rig. I’d been playing about with this over the winter in order to get the ultimate efficiency out of this rig, and add a bit more finesse to it. The Covert Chod Hook in size 6, Trip Wire hook link and a Mirage Fluorocarbon stiff link gave me all of the above, coupled with 5 feet of Heavy Plummet and a 1.5 oz Bolt Bomb in the subtle chod colour finish. I didn’t think I could have it constructed any better. 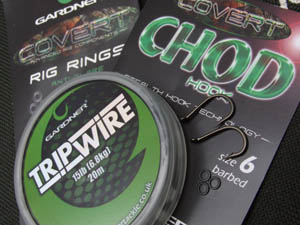 I added a 16 mm B5 pop up and balanced it with some rig putty so that it just sank to the bottom. I had a little smile every time I tested this rig, as its strength lies in its outstanding hooking abilities, and the fact it never tangles, the stiff boom section ensuring the hook bait kicks away from the lead every time.

I was back 3 days later, and although I had a look around, my mind was made up to tuck myself away in the little snaggy corner. I used 2 rods, both with the stiff links on, and flicked the first one just off the bush, only a rod length from the bank. It didn’t hit with any sort of drop, however my next cast, some 3 feet shorter hit that clear spot with a thump I could feel all the way down to the rod butt. I was definitely on it, and definitely hadn’t been when I last fished the swim before. My other rod went out onto another hard spot to the right, and I dropped a dozen or some B5 boilies around each, hoping the baiting from a few days before had done the trick. It was tempting to get in the boat and have a look, and to see if all the bait had gone, but I knew that could well damage my chances. 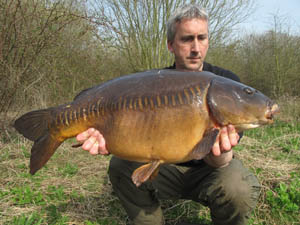 I love this type of fishing, real close range stuff, but it does have its complications. Being quiet is one, and whilst it’s always nice to stand watching the water next to your rods, this wasn’t possible here, fishing as close as I was. I set my bivvy way back at the entrance to the swim, and politely requested any visitors to stay at the back of the swim and talk quietly! I had a visitor soon after getting sorted, Big Jim who was fishing a lake close by, and as we stood at the back of the swim talking about his campaign, my left hand rod began pulling round and the buzzer screamed. I was fishing locked up tight as I guessed that if I was fortunate to hook anything it would go left for the snag tree, and sure enough this one did. I plunged the rod tip right to the lake bed in order to keep the line clear of the branches. Its times like this you need the ultimate confidence in your tackle, as if I gave anything the fish would have reached the snags. I held on as it made several strong lunges for the branches, but after a short time it changed tack and headed out in front into the open water. It stayed deep, but I knew that it was now in relative safety, and just let it tire itself against the clutch. After a couple of rolls Jim netted a stunning looking linear weighing 29 lbs. I was delighted to get my early spring campaign off and running. I landed another fish at 25 lbs later that evening, and had the feeling my little bay may well have had enough pressure for the time being. It was time to have a look elsewhere and I began to study the main lake for some new options. I’ll let you know how I get on. 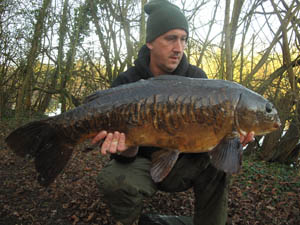