After my capture of Kiss Scale I was once again away on other waters for a while making videos and writing articles, so upon my arrival at the Match Lake some weeks later I was shocked to discover the lake was literally sewn up with weed. At this point I thought it was time for a bit of underwater gardening and spod work. Back to the bait and wait scenario so I decided to do this in a swim nobody really fished called The Gate swim, which is probably the furthest distance from the car park, located next to the borders of the Copse Lake and the Nursery Lake.

After spending a lot of time watching the carp milling just out in front of this swim in the dense weed, I decided to create three spots. Firstly, I created two channels into these clear pools within the weed beds, then casting down towards the left tree line, creating a clear path by raking until I got positive drops, and then proceeded in emptying ten kilos of particles and boilies over the top every other day for about 10 days until
I was able to do a session.

On my first session I managed 3 runs of which I only landed one. Losses where due to a hook pull in the weed and another fish finding the safety of a submerged tree which I later removed. On the bright side though I caught a stunning Pure Ghostie weighing 29Ib 4oz, a fish was again slightly down in weight as it can go to 32lbs.

I continued with the rake and feed programme until my next session, which was a quick overnighter that resulted in just one take, this time resulting in the capture of a 24lb cat. The next session was a bad mistake on my part going into the gate as all the near-by swims were occupied and the pressure pushed the fish out into open water away from danger.

Again my efforts were needed elsewherem, so I didn’t fish there again till October, ending up in the Reeds Swim which was a waste of time really.
Only 1 fish out in 2 weeks between a dozen anglers, safe to say I blanked with only shows out in the safe weedy open water.

Fishing at the Match Lake last year taught me that a person with insight, patience and perseverance will eventually be triumphant, even if we are tested to frustration enough to doubt our own angling ability. The biggest factor in a quest has to be time and timing, this is everything as if you get your timing wrong, whether it be pressure from other anglers, or poor weather conditions it can result in a blank, and time is something there is never enough of, whether it be walking, watching or simply giving your traps enough time to work effectively and look safe to your target species. So maximising your free time and fishing effectively is key. Taking nothing to chance, attempting to calculate your every move, (easier said then done). But overall it’s important to remember ‘you gotta be in it, to win it” and you only get out what you put in, and remember just be the best you can be and try to enjoy your angling even if it sometimes feels like 90% work and 10 % of the fun stuff!!!! 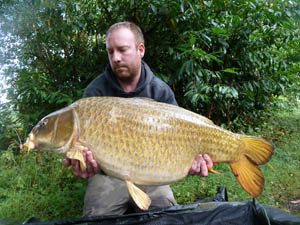 My main quest for the year 2012 will be back at the Match, this time around, with a better understanding of the ‘puzzle’ to hopefully show me the way to putting some stunners on the bank. There is a common carp or two I would dearly like to meet with on the unhooking mat. One I have seen that exceeds 40 lbs but avoids capture with ease, so its fingers crossed and keep checking the hook points are razor sharp.

I would like to say thank you to Gardner Tackle, Mistral Baits and Carpaholixx.com for their support in 2011.