Hi to you all.

I’ve had a few blank sessions recently on the lake I fish at; still it’s nice just to be able to go. I had also planned a trip with some work mate’s to fish Blue Pool for a couple of nights in late February. With most of the winter being rather mild we thought we would have a few carp but the week we were supposed to go it froze solid so that was cancelled, but not to worry I did have one or two other things to do.

As I’ve mentioned before I work standby every 5th day and I had worked all night one Wednesday and got back home at about 4AM on the Thursday morning, which gave me Friday as a day’s holiday. By this time the lakes had all thawed out so I thought I would drive to Yateley angling and book two nights on Sandhurst.

On arriving I walked round the lake and had a chat with one of the fishermen to see if he’d had much? He said that he had heard a couple of carp jump in the night a couple of swims down to his right, so after a quick cup of tea I said good luck and carried on walking round, there must have been about seven other anglers on the lake.

I got to the swim where the guy said he had heard the fish and I noticed a patch of bubbles about sixty yards out. I dropped my water butt and continued walking, I passed another guy but he was asleep.

On my way back to my car I didn’t see any signs of activity so I thought that I would try the swim where I saw the fizzing. With that I loaded my barrow and pushed it to the swim, had a quick look to see if there were any signs of carp about the area and started to set up. Luckily it was dry so I got my rods set up first; I left all the rest of my kit on my barrow, just in case I wanted to move. That way it’s easier and quicker if you see carp in another swim. If it had been raining I would have set the bivvy up first.

I decided to fish one rod sixty yards out with my usual critically balanced bottom bait coupled with a three bait stringer. On the other rod I had a single popup and if I saw a carp jump out I would reel in and cast this hook bait on it.

All done I put the kettle on as it was getting dark. It was a cold night with no action but I woke about 3am and heard a carp jump out in front of my swim as I looked at the water I could see the rings coming straight in and I thought “that’s near my left hand rod”. I watched for a couple of minutes with no action then drifted back off to sleep and didn’t wake until 6am.

I fished the rest of the day but unfortunately there was no action on this occasion.

A week or so later it was going to be a beautiful weekend, weather wise so I thought I would have a go for another species that I wouldn’t normally go for, the Perch.

I’ve caught a lot of perch but no big one’s, so a two pound plus would do me fine and it was a chance to take my dad as it’s his 75th birthday soon. On the way home from work on Saturday I popped into a tackle shop to get some red maggots and some lob worms and then onto Tesco’s to get some prawns, great I thought that’s me sorted. The next morning I picked my dad up and headed for this little lake that my parents fish. It’s nice for them as it’s not too big and not too far from where they live, but it can get busy.

I’ve not really done much perch fishing since I was a kid but a big perch looks very impressive and there’s rumoured to be four pounders in this lake and no one fishes for them I believe. First job was to get dad set up, he was after carp using one rod with a method feeder with a cut down boilie tipped with fake corn.

I was using my old ledger and on the reel was loaded with 6lb HydroFlo main line with a 2 AA float and a hook link made from 5.5lb Mirage Fluorocarbon and a size 10 barbless Wide Gape Talon Tip hook.

Bait wise I had a couple of pints of maggots two tubs of lob worms and some prawns I tried worms, but no joy. Then I put a prawn on and flicked it in the edge. After a couple of seconds my float disappeared I struck to soon and I missed it, so put another prawn on and cast to the same place and again my float quickly went under. This time I left it for a couple of seconds then struck and connected with a fish I hoped would be what I came for and sure enough a decent sized perch was soon splashing on the surface so I grabbed my landing net and scooped up the perch and went back to my dads swim to weigh it. It went 2lb and he took some great pictures then we put it back. I put another prawn on my hook and went back to the swim to see if I could catch a bigger one. 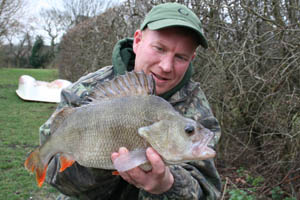 I didn’t have to wait long before my float slid under again and I struck into a fish that felt better and when it surfaced I couldn’t believe my eye’s it looked twice as big as the 2lber I was glad when I slide the net under it this one. It went 3½ pounds!

I was understandably well chuffed, and with all the photo’s done I slipped her back I had no more action but to tell you the truth I didn’t care. I was really happy and my dad caught some nice carp to double figures so we both had a nice day.

That’s it for now – but with the spring round the corner I’ll soon be out carp fishing again.