On my next 48 hours session down the Match Lake, when I arrived I decided on a swim called The Beach as I saw a few fish grouped up in between the two islands in front of the swim. At this stage the weed was starting to really take a hold. I stuck to my guns and fished all three rods, again with Chods, in the same channel as I did from the parties, only from a different angle and two of the rods positioned tighter to the islands. 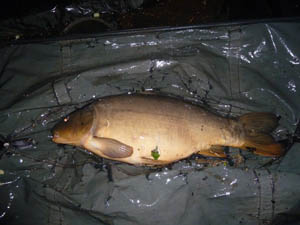 The weather that night took a turn for the worse and it was proper stormy and wet. Nothing came out that night, but I was confident it would still do a bite so I stayed for another day and night. Again on nightfall the weather was wet and at midnight the middle rod roared off and the fish managed to get stuck in a wall of weed. So there I was in the rain, up to my thighs in water altering the line angle when slowly the carp came waddling towards me and into the net first time, result! After picking the weed off and biting the mainline the result was a mirror of 18Ib 4oz. Although not the biggest I felt it was still a result. 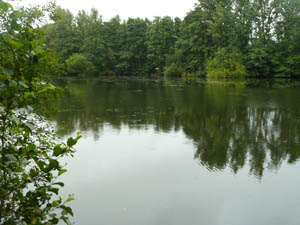 Unfortunately the weed grew on more fiercely over the next few sessions, and I started to struggle – losing a proper one from the swim called the NF, and struggling over the next couple of sessions with only a small cat around 10lbs for my efforts.

It was time to think about presentation and I arrived at a rig I designed which can be viewed on Carpaholixx.com called the V- Rig. I started playing around with 12 mm wafter hook baits and a new lead release system called the Gardner Multi-clip. In my mind this is the most efficient lead clip system I have ever used, and works beautifully with a 2 foot Heavy Plummet leadcore leader.

From here on in the use of the Gardner Weed Rake was also paramount, and I used it to clear channels through the weed and open up areas for landing fish in front of the rods. Because they were only little spots within the giant weed beds I needed the lead to eject on the take and a hooklink that was versatile and difficult for carp to deal with that would work over all lake beds in tight baiting situations. It also needed to be strong.

One other tweak I made to my arrangement was switching from the 16 lb Mirage to 20 lb (0.40mm) HydroTuff in low -Vis Green, as this came up through the water upon a take much easier than the Fluorocarbon, and was mega strong. 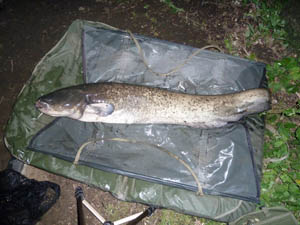 After a little homework with the end game my next couple of sessions revolved around some serious raking in The Reeds and Lazy mans, I was rewarded with 38Ib 8of cat and a 22Ib 4oz mirror. All the while I dreamed of the ultimate prize, Kiss Scale.

I’d missed a few weeks on the Match Lake due to features I was doing on behalf of Carpaholixx.com, so was itching to return. I managed to have a wander around the lake on a school night, and to my surprise it looked more like a snooker table than a fishing lake. How things had changed in just the space of a few weeks! 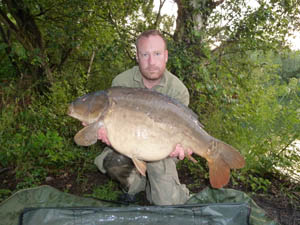 I decided to have the usual walk around and discovered a large mirror and his mate using a tunnel in the weed out in front of an area known as Middle of the Roads. So I set about sorting my traps with the aid of the casting rake. I discovered a sweet spot not far out that looked like a tunnel or pathway that the carp used. Probably the old roadway the JCB’s used when excavating the lake back in the day. Two rods were placed on this feature and one was placed to my left next to a overhanging bush that jutted out that felt about 8 feet deep and the lead landed with a firm thud.

Baits were dispatched, around a kilo of whole and broken boilie. As the evening drew in I felt really confident, and this particular summer evening the fish were boshing out all over the place giving away their presence.

Around 3 am the right hand rod sounded a take. The rods were all locked up with just a drop on the hanger and as I lifted up the rod the water exploded and I thought I had hooked Free Willy! It was desperately trying to make the sanctuary of the thick weed beds, whilst I just held onto the rod that was taking on an outrageous curve. Suddenly it turned and gave a strong but ponderous scrap for around 10 minutes before I managed to heave it into the waiting net. 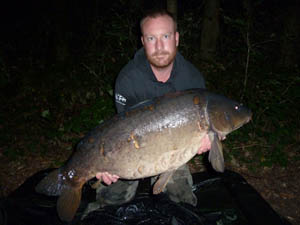 Now because of the super strong scrap and a dodgy head torch I still wasn’t sure what my prize was beneath the weed in the net, as I parted the weed and looked closer I thought this beast was a forty pound mirror judging by its width and length. I yelled for assistance in the middle of the night, but nothing. That was until a cat angler called Mick yelled across that there was a bailiff just round the corner and that I should wake him up. 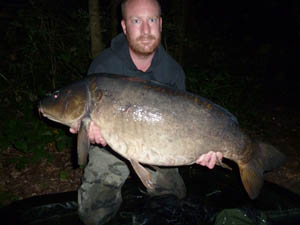 So after securing the beast within the net safely (as no sacks are allowed), I proceeded to give the Bailiff a heart attack as I woke him. He kindly reeled in and helped with the weighing and picturing. My suspicions were confirmed I had done it! It was the king of the A team, ‘Kiss Scale’. The only problem was, although the carp looked in great shape it was spawned out at a weight of 33lbs 4oz despite being caught at 38Ib 4oz early on in spring. This fish was truly the longest framed 30lb’er I had ever witnessed. So after thanking the bailiff and making a cuppa I was absolutely buzzing. I’d caught my target mirror in around 4 months!