Skip to content
Home|Gardner Supporters Catch Reports, Ian Lewis Articles|Part 2 – Back for more on the Match – by Ian Lewis

Part 2 – Back for more on the Match – by Ian Lewis

On return the following weekend I managed to get back into the bay again, as I thought this would be a good starting point as I had observed that there were a few fish drifting around in the upper layers close by. I placed the rods on the same spots with the same tactics, only this time introducing the bait before casting out.

After the sun had set I sat intently watching for movement, but all the shows I saw were much further out, more towards the main body down towards the ‘Party Swims’ and a move simply wasn’t on the cards as the swims all along there were already inhabited by fellow anglers.

Two hours later I had a belting take on the right hand rod by the snag, and after what felt like a carp scrap I landed a 17 lb cat. All through the night I was kept awake by the noisy birds and carp splashing around behind me in Tri-lakes, another neighbouring lake.

First light arrived and I had only had a couple more bleeps through the night, so I had a quick cuppa and I reeled in after what I deemed bite time on most lakes. First off I checked my far margin spots only to see a lot of the bait I’d fed the previous evening was still there despite the bird life. So I went for a look about to try and find some fish, this time with a bucket to hand!

As I wandered round I noticed a new wind picking up, heading directly into the swims known as ‘The Point’ and ‘The Birches’. Upon arriving another guy arrived at the point swim, so after a brief meet and greet I headed further along into the Birches and sat for twenty minutes or so scanning the water. Although I only saw a subtle show 60 yards out it just looked and felt right, so after placing my bucket in the swim I semi packed up from the bay, juggled the gear onto the barrow and raced round to the Birches like a man possessed.

Upon arrival it started to drizzle and the wind picked up and the sky soon became overcast. Up went the shelter and on went the waterproofs. Again this was a swim I had no idea about so I went with my normal process, having a quick lead about to get a fix on the lakebed.

It was mainly weedy with a large area of silt at about 80 yards that seemed liked a good area to position two rods in, to ambush fish moving off the island up the lake or into the front bay, or even retreating back to an area out of bounds dubbed the Jungle.

I made a mental note of a large green tree to aim for as a sky line marker should I need to recast out again in low light. My third rod was positioned down the margin on a nice gravelly area running towards the Jungle. When I cast out the 2 open water rods these were once again fished on Chods and all I looked for was a nice drop telling me the baits were on the silty area – because of the size of this area accuracy wasn’t too essential.

The left hand rod went down with a resounding crack onto the deep clean gravel area and was fished with a snowman presentation incorporating 25lb Chod skin and a size 6 Covert Mugga tied up blowback style. This rig was stepped up due to the nearby Jungle snags and the coarse gravel slope. It was in turn locked up tight, although still fished with a slack submerged 16 lb Mirage mainline. As the snags were a good couple of rod lengths away I really didn’t want any fish drifting in and out to be aware of the trap caused by a tight line.

After the dreaded seagulls finally left me alone on darkness I dispatched 2 kg of boilies, both 15 mm and 18mm, over the open water rods and catapulted a few pellets and boilies (whole and chopped) over the left hand rod. In fact I fed slightly off my hookbait creating a situation where the hookbait looks like a stray bait that’s fallen away from the main feed. I often do this and it normally picks out the craftier, bigger carp that feed around the edges of the blatant area of feed.

Around 1AM I heard a crash in the darkness out in the open water where I had spread the baits and shortly after I had a ripping take on the middle rod. Immediately my 3 1/4lb test curve rod was taken to maximum curve and the clutch on my reel was screaming. At this point I had already guessed what I was attached too!

Some 30 min later I was calling over to the guy next door for assistance as it had taken out my right hand rod and everything was mega tangled. Some time later we scooped another Match lake Cat into the waiting net. After sorting out the 2 rods and heaving the cat onto the mat we took a couple of snaps and t a reading of around 42 lbs plus.

After re-tying the rods I lined them up with the tree in the distance and fished them about 10 feet apart. At this stage it was about 3AM and I was knackered. I reckon I was asleep for about 2 hrs when my middle rod was away again, this time it felt much more carp-like although it had managed to find a wall of thick weed. With a bit of cat and mouse persuasion it freed up and headed towards me. As I pumped away it came bobbing up on the surface, head covered in the green stuff so I didn’t hesistate in scooping it up. 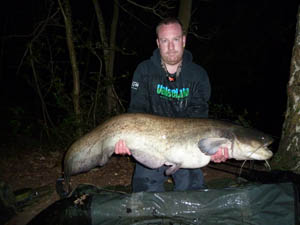 As I frantically removed the weed I was met with the sight of an old looking leather and that weight 17Ib 8oz. Being that I was absolutely tired and no sacks are allowed on CEMEX waters I returned it without even a picture. This was a mistake as I later discovered it may well have been one of the original residents that had lived there all these years. This was all the action I received before packing away happy. Two sessions in and the score sheet already read three carp and two cats! 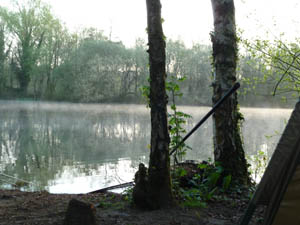 For the next session I only had a quick overnighter at my disposal, so on arrival I had a quick look around and decided to have a night in a swim called ‘the Reeds’ that is located in the front bay. My reason for choice of swim was simple, no fish spotted on walking the lake and no lines whatsoever in the area – whereas the rest of the lake was fairly busy. The match lake carp seemed to take advantage of quiet areas pretty quickly.

My tactics stayed the same, only this time I cast out towards the far snags just looking for a drop as I didn’t want to give my presence away. The third rod was dropped close into a marginal bush. I baited with a handful of boilies fired out to the snags with the stick (after the gulls gave me 5 minutes peace) ,and a few dropped around the bush. 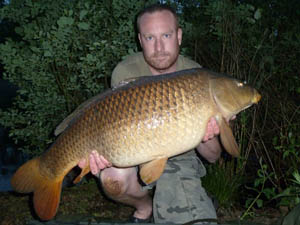 I sat there watching the water, it was a lovely warm sunny evening and 3 hours in I was away on the middle rod. After a bit of patience with the sparse weed I netted a gorgeous common. A young lad called Ethan helped with the weighing and pictures, 26 lbs exactly. I repositioned the rod in the ever growing darkness and put a handful of baits out again. 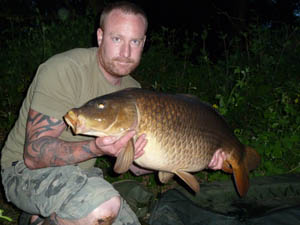 I slept a little for a change, and I remember dreaming of one day catching the king of the A-Team ‘Kiss Scale’, which I believe has done 39 lbs in the past. The following morning I was packing up most of my kit when I had a run on the left rod this time the fish unfortunately made it to a sunken snag and shed the hook! That’s fishing I guess, you win some and lose some…

Unfortunately I couldn’t get back down for about 12 days due to family commitments and work. However Maria, my better half, gave me the green light to do a 48 hour as she was working over the weekend. What a touch I thought, as it seemed ages since I had last wet a line.

Arriving at the lake it looked fairly busy so I thought I would grab my gear from the van and see what was free and where looked good for a bite as I barrowed my way round. Nothing looked that great until I got round to an area known as the party swims, where on my second session I had seen fish showing on nightfall.

Out in front of the swim are two large islands with a big channel between them and an expanse of open water – in this channel were literally dozens of carp grouped up having what appeared to be a social. For me these carp were out of zig range or floaters, and with the abundance of the feathered variety I thought I would set up and study the carp for a while before having a lead about and putting a plan together.

As soon as I pulled out the throwing stick and boilie pouch the flying rats hovered and swooped so I resisted putting any bait out. Instead I cast well short of the fish to have a feel around and found up and coming Canadian weed with the odd smooth bit of silt. I couldn’t resist and cast a light lead just beyond the carp and felt it down onto a smooth silty bottom. As I carefully edged it back it was still very smooth. That’ll do for me I thought…

I did a little bit of work with the Gardner Casting Rake just to ensure a reasonable area close in front for landing fish and allowing a better chance of reasonable line lay and set about tying on three Chods fished as described before, running on 4 foot leaders with the back bead set 4 inches away from the spliced loop. 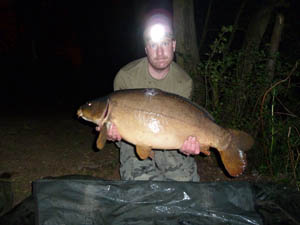 I have a few theories behind this, the main one being when it flutters down through a reasonable depth it’s at the furthest point and will sink slower and settle nicer over the Chod, weed or silt. When the bait is sucked in it comes into contact with the weight of the main line immediately, just a theory though. 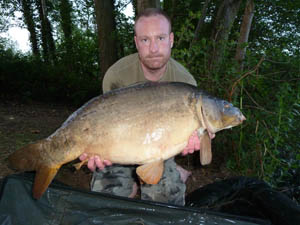 So after pinging the hook baits out I waited till the gulls disappeared and put out a 3 kilos spread all over the three rods. The fish crashed and rolled through the night around the first island and the channel and I was well confident. Confidence seemingly justified, as by the following morning I landed two lovely mirrors weighing 25-14 and 23-4. 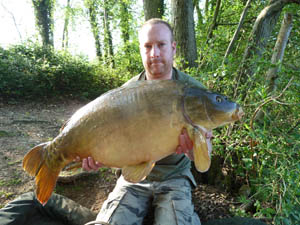 Chuffed to bits I continued to fish up till midday and then reeled in and rested the swim and went for a walk. I decided to fish the same again fishing all three rods over a spread of bait with the remaining 2 kilos I had with me. The tactics resulted in three more takes, of which I landed two more carp. A stunning Redmire strain common of 22Ib 4oz and a nice mirror of 22Ib 8oz. 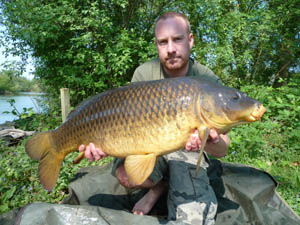