With a slow start last year due to dreadful winter conditions, I didn’t manage to get the carp rods out of hibernation until late February, and when I did I fished at a local club water just 10 minutes down the road.

My visits were mainly afternoon sessions when the weather was a little milder in hope of a late afternoon bite. I mainly fished a 7” combi- rig comprising a size 10 Covert Mugga, 15lb Trickster and 16lb Mirage. This was  fished rotary style on a short 45lb Brown Heavy Plummet leader, with a whittled down bright pop up and a tiny bag dropped in my known winter lay ups which were all short range. My trips were going well, with the capture of several reasonable fish under my belt as the weather was gradually lifting, becoming much milder.

I was still unsure where to join this year, as I fancied a new challenge and the Yateley Match Lake fitted the bill. I had never fished there before and had only walked round it a few times despite fishing many of the surrounding lakes for nearly a decade.

After speaking to the head bailiff  ‘Bidders’, he informed me of a few vacancies on the 60 man syndicate, so with no further ado I called Cemex and purchased a ticket immediately, although I was unable to make a start till 1st April.

I only knew a little about the water; fish stock, size, and that it had become extremely weedy in recent years, so really I was starting my fishing from a blank canvas. Not always a bad thing as you don’t have too many pre-conceived ideas.

The 1st trip happened to fall on a Friday and as I arrived I was met by the sight over a dozen anglers already pitched up. After 2 laps of the lake I had made up my mind about a couple of areas I fancied trying – but as I arrived back at the car park even more anglers arrived and were loaded ready to race off to their chosen plots.

Hastily, I gathered my armoury of tackle from the van and crossed the River Blackwater to pitch up. As my journey began a new south-westerly had picked up and was pushing into a completely pressure free bay, backing onto the Copse Lake.

Bingo! I thought ‘this will do nicely’.

Not knowing anything about the lake bed I had a little feel about with a lead, and found mainly sparse weed with a fairly clear silty, slightly choddy area 25 yards out in front, with a really deep clear firm area in front of a snag down to my right.

Rather than going all guns blazing I thought I would feel my way in as I still had 40 odd hours of fishing ahead of me. I set about attaching a couple of Chod rigs to be fished as singles out in front, safe in the knowledge this would optimise presentation over the silty area.  I decided on a snow-man presentation fished alongside the snag with a small scattering of boilie chops and pellets.

That night I heard a fish roll twice on the opposite bank, so I made a mental note of its location ready for the next day. I was really confident as I now knew I wasn’t far from fish and that they had obviously followed the wind into the bay. At this stage my goal was purely to put a carp on the bank from my new venue regardless of how much time and effort was needed. 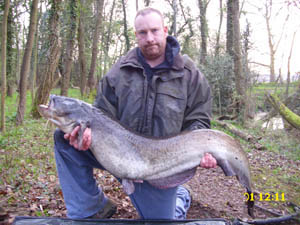 Around 5AM  I was rudely awoken by the sound of my right hand buzzer going into meltdown.  I raced from my shelter, completely missing my shoes, and took up battle with something that felt similar to “The Caversham Princess”. After an initial 100 yard run I managed to slow the beast up and was thinking ‘this ain’t no carp’! After a fruity 25 minute battle I heaved a Match Lake Cat into the net.

Although not the intended species I was well chuffed. A little help from a near-by angler and the Reubons spun round to 43 lbs, and after a couple of slimey pictures back she went. I was buzzing as I was off the mark, sort of.

I decided to have a few cuppas and scan the water as by this point I was wide awake. The sun rose through the morning mist and I watched another 3 shows from sizeable carp on the far margin just like the night before. This gave away where I needed to be.

Later that day I reeled in and set about a plan and creeped round to the far bank to have a closer look at where the fished had showed. I discovered a proper glow down in the depths; a lovely clean gravel slope running away from a snaggy tree line. I was quite sure there were no carp present but it was clear that they used this area regularly.

I returned to my swim and decided to flick a marker out feeling it down onto the gravel slope, then edging it back to the silt crease. I then proceeded to clip it up, wind in and walk it along the path plugging the lead into the mud then returning and duplicating this process with my 2 chod rods. After the rods were clipped up I then set about walking round and dispatching 2kgs of boilies all over the area. They were spread about creating a situation where the carp would be moving from one bait to the other. To my mind this is a great feeding situation whilst fishing the chod. After meticulously checking my rigs – made from 20lb Trip Wire and size 6 Covert Chod hooks I replaced the hook baits and cast them towards the far tree line, each being feathered to the clip and felt them down with a slightly dull but positive ‘donk’. 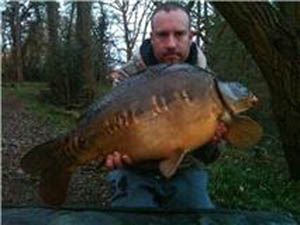 Later that evening I was away with an erratic take on the left hand rod, resulting in my first Match Lake carp, a mirror weighing 20Ib 4oz. It was clear the fish had moved in so I resisted the temptation of casting the rod back out as I still had a rod over there and didn’t want to risk a lead spooking them. An hour or so had passed and there were carp fizzing and bubbling all over the slope.

Watching this it was clear that a take was immanent, or so I thought. After another hour had passed I was thinking I had been done as the activity had stopped. Finally I received the bite I had been waiting for,when just like my first take the middle buzzer went into meltdown, stripping line off a nearly locked up clutch. 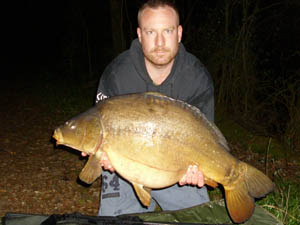 When I lifted the rod, it took on an impressive curve. A slow but ponderous fight was soon over and I was soon picturing and weighing my second mirror, this time 27Ib 2oz! I was delighted as I was 1 of 18 anglers fishing this weekend, so 3 takes was better than I ever imagined from my first trip to a new lake.