WHAT AN OVERNIGHTER – by Pete Kingsbury

I was busy doing a training course for my job all week up at Thatcham and every day saw me passing Horton on the lovely M25, so that was me sorted for an overnighter for Friday, especially as the moon phase was bang on for big carp!

Friday came and the car was loaded – the weather forecast was for showers with a south easterly wind changing around midnight to light north easterlies. Based on these conditions I knew where I wanted to be, especially as I only had till 9am on Saturday morning as had to be home around 10.30am, but any time was worth it.

I completed all my course exams and managed to get away around 2.30pm, which enabled me to get to Horton at 3.30pm quickly signed in and hurried down to my chosen swim to find it empty.

As quickly as I possible I set up my tackle and got the baits out as I wanted the area to be well settled early (experience had shown that the fish were showing around 3am).

I thought I would spread my hook baits out across the vast amount of water that my chosen swim commanded. I was using the new Trickster braid for my hooklinks still, which was creating something the fish weren’t used to as a lot of people are using coated hook links or stiffer type material which generally act very natural and was using new bait from Dynamite Baits, ‘Spicy Peanut’.

For hook baits I decided to use half a pop-up and half bottom bait, the combination of  which will critically balance the bait. This is a method that I had great success using in my early years carping. Each traps was finished off with a stringer of halved 15mm frozen Spicy Peanut Boilies before being cast were cast out.

Before going to sleep I set my alarm for around 2.30 AM to make sure I got up get up and hopefully see a few carp show themselves, but I didn’t have to wait that long as the fish started to show opposite in a swim called ‘The Sick Swim’ around 7pm. At one point I was just starting to pack away my stuff for a move when a couple of fish showed in the area of two of my hook baits, so I made a cup of tea and carried on my vigil as the fish gradually getting nearer. A couple of fish showed nearer still, which gave me great confidence but then it started to rain quite heavy so I had to retire to bed and what with a hard week driving and exams I was asleep dreaming of monster carp.

With the alarm set for 2.30 AM I desperately tried to get some sleep, but with the excitement of seeing fish in the area I was buzzing. I must have dozed off eventually as my alarm went and I got up. Thankfully the rain had stopped and I was able to see the entire lake from my swim, also the wind had ceased which helped with observing any ripples coming in so  could suss out what direction they were, but I waited until 4am and only saw one fish show further down the lake.

I could not believe it! Before the rain they were really active and now my confidence was smashed so I went back to bed to get a few more hours sleep. My alarm was again set, this time for 6am.

Beep beep beep – the alarm clock went again and though I felt tired I still got up as I knew I had to be off home early. The kettle was put on for a last cup of tea and I started a slow pack away. Everything was nicely tidied away except my three rods… but with ime was marching on I had to concede and reeled my right hand rod in, Just as I packed it away, a carp showed twice roughly in the area where the reeled in rod had come from so I quickly reeled the other two remaining rods in and checked the hook baits were ok. After attaching a stringer of chopped baits the wind stopped just as I was about to cast out and I noticed five patches of bubbles in the same area, so I cast both rods out to the area and placed them both on the floor and packed away my alarms and rod rests. 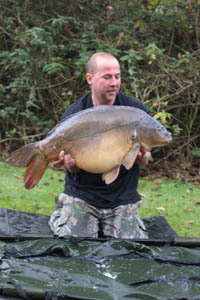 I was sitting on my unhooking mat when one of the Horton bailiff walked into my swim for a chat, as he did my left hand rod was away. Reacting quickly I got up and bent into a solid but moving fish. It was very exciting as it happened so quickly after casting the baits out, so I concentrated on playing the fish which was just kiting using its weight to its advantage.

Whilst playing what I new was a big fish the head bailiff walked into my swim and he noticed my other rod was away as well! 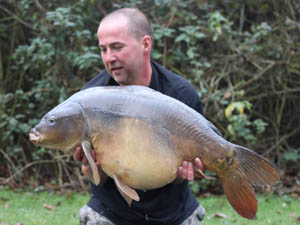 I picked that up also (which was a bit of an issue as I still was playing a large fish on my left hand rod) and passed the rod over to Del the head bailiff to look after. I pumped the fish in quickly trying to land it before the other fish could gain sanctuary in a nasty snag which is in the next swim along.

Soon I managed to get the fish close and we got ou first glimpse of it and recognised it as a carp called Uno, which I knew would be a forty. Gently, I coaxed her into the waiting net, whilst Bob secured her in my net and I picked up my other rod and commenced battle with the other fish which surprisingly by now was a long way out. Once again I bent into the fish, which also felt like a bit of a lump and I proceeded to gain control and bit of line.

The fish came in a lot easier than the first and soon it was gulping air ready for netting and went into the borrowed net first time. Words can’t describe how I felt at that point as I stood looking at two big mirror carp in the landing nets with about five people in my swim shaking my hand saying how awesome it was to happen in less than 24hrs fishing. 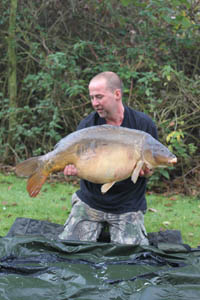 I was gob smacked and still cannot believe it as I write this, I had an opportunity to fish the moon phase was bang on and the weather was spot on, I just got it right and the other factors fell into place. 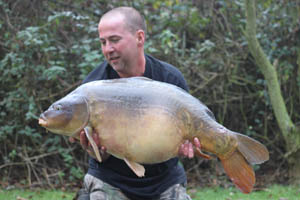 Once I had calmed down and got out all my essential weighing and camera stuff we proceeded to get them out one by one, we got Uno out first and she weighed 42lb 12oz. Then, after we had slipped her back we got out the other fish which turned out to be Alfie at 37lb 12oz. Ecstatic, I slipped him back and then with a smile from ear to ear and as everyone drifted away I packed the remaining bits away and headed home.