After last months bog my time on the bank has slowed down as my job gets busy this time of year. Sometimes I have to work long hours and do standby on a rota; this is 24 hours on an emergency call out. If I am out until the early hours of the following morning I get the next day off, which is great because it enables me to have an unexpected days fishing.

One day in November this very thing happened and I managed to get out to the lake for a days fishing. I got there about 8AM and the weather looked spot on. Mild, low air pressure and grey cloud. It had rained in the night and the forecast said more rain was likely during the day.

There were a couple of blokes fishing up the top end so I dumped my barrow in a swim and went to have a chat with them and see if they had caught anything. They told me they hadn’t, but they had seen a carp show up the other end of the lake.

After a quick cup of tea with them I got back up the other end and watched for a while, I noticed some bubbling going on about thirty yards out then all of a sudden a carp just popped it’s head up and a line of bubble’s appeared as it went down to the bottom. I wasted no time and as I already had my rods set up with new rigs on I just had to bait them.

I decided to use the new White Choc and Coconut boilie by Dynamite Baits. On this occasion I opted to use a stringer of three baits, plus a piece of dissolving rig foam. This is so that when the stringer melts the foam will pop to the surface. By doing this I can pinpoint precisely where my rig has landed. That way if I wanted to put some bait around the hook bait I can put it spot on. On this occasion I thought a little three bait stringer would be all that was needed, so I cast the right hand rod twenty yards out and the left rod about thirty yards.

With both the rods done I put the kettle on just as it started to rain. I then put my brolly up and sat under it with not much happening. No more carp showed.  The rain stopped about mid-day and a friend of mine popped in to see me. We were sitting in my swim chatting, he said to me “it looks good for a take” and I agreed with him. Eventually after a couple of hours of socialising my friend left.

As I looked out to the area where I had my baits I could see a patch of bubbles that I thought must be a fish. It was about 3.30pm and it had just started to rain again, when out of the blue my right hand rod pulled up tight. 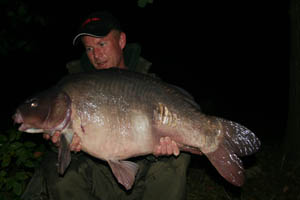 I grabbed the rod and bent into a fish which powered out to the middle of the lake; managing to get the carp in the net without too much trouble and was really happy with the result. I secured the net in the edge of the lake, unclipped the hook link from the speed link and then went to get one of the angler’s up the other end to help with the photos.  The angler was more than happy to take photos for me. The carp weighed thirty two pound and the hook hold was very good – right in the bottom lip. I was very pleased with the new Continental Mugga hooks which I was field testing. With the photo’s all done I slipped her back. A great result for a quick day out…

I haven’t been out since then, I think I might have a dabble for a big perch as there’s a little lake near to my house that’s got some big perch swimming in it. I’m going to try to catch one before they spawn in March I will let you know how I get on. Bye for now.