It seems as though all our prayers had been answered as by the start of December there had hardly been a frost, and the weather had remained unseasonably mild. Due to work and family commitments it was hard to get the rods out for a couple of weeks, but with the conditions remaining so good I just had to find a way!

I’d kept the bait going in throughout this time, not loads, but a kilo of Essential B5 twice a week which I felt was enough to keep the fish interested, and hopefully keep them on the move. Through my observations I had narrowed their location down to one swim on the lake, a plot that had produced most the winter fish I have been fortunate to catch over the last couple of years.

It’s not hard to see why really; it’s got the deepest water, has good cover in the form of far margin overhanging trees and is sheltered from the cold Northerly wind. It also has the sun on it most of the day. However, the trees didn’t only appeal to the carp. The lakes resident coots love it in there, and were ravenous on the bait too. I knew that they were eating a fair bit of my bait so I tried to keep baiting up to just on dark, which I hoped may give the bait the longest chance before being jumped on by the feathered fiends.

I‘d also noticed the spot I had been fishing and baiting had become noticeably harder, and the lead would hit the lake bed firmly, rather than the silty thud that I originally got. Consequently I changed over to bottom baits, and my favourite blow back rig, that I knew I could fine down specifically for winter. 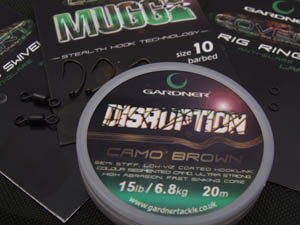 I scaled down to really thin 25 lb Plummet lead core leaders and a 15 lb Disruption hook link, as the brown version perfectly matched the silty bottom that I was fishing on. This was coupled with a size 10 Mugga hook. I also added a thin coating of B5 paste over the 16 mm hook bait I was using. The paste wrap on the hook bait giving optimum leakage and attraction in the cooler water temperatures. A little 1 ½ ounce Chod finish Bolt lead finished it all off nicely, and gave me a presentation with a bit more finesse than I usually have, plus it maintained good hooking abilities.

Fining down can be a vital edge in winter and I have been delighted with the added camouflage the Mirage mainline has given me, not only the invisible colour, but also its fantastic sinking abilities. This has been a real bonus on this lake especially, as the low water level and the resident swans would have meant them constantly wiping me out otherwise!

I arrived early morning on a late November day that was clear, sunny and mild. The lake looked stunning, with the water as clear as I had ever seen it. Like many lakes this year the water level was incredibly low, certainly the lowest I have ever seen it, but with the leaves almost all gone and a gentle breeze blowing over my head it did look promising. Indeed, only 10 minutes after casting out I was in! So early in fact that after a few minutes of spirited runs the fish was wallowing in front of me, and I realised in true ‘noddy’ style I didn’t have the landing net up. There was only one thing for it, and I put the rod back on the rest and loosened the clutch, and ran up to the top of my swim to assemble the net. As always the faster I tried to be, the more it all went wrong! 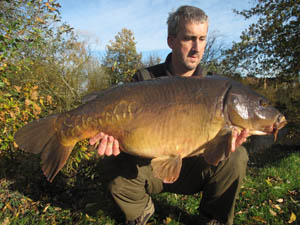 At first I couldn’t get the pole out of the holdall, and then the net wouldn’t slot into the spreader as I tried to impossibly force it in! Eventually it was ready and throughout the process I could hear the clutch singing as the fish was off again.  I was praying it was still attached and I was relieved when the battle recommenced. The fish must have been wondering what was going on, but eventually I had it in the net. I laid it on mat and was delighted to see a stunning mirror that I had never had before. Weighing 28Ib 10oz I retained it in the sling while a friend made the journey down to do some pictures. In the meantime I flicked the same rod out again after giving the hook a quick sharpen with my new stone and topped up the spot with another 30 or so baits. I felt the disturbance of playing that fish may have put paid to any further action for a while, but it was lovely sitting in the sun, only a few weeks before Christmas!

I was surprised when half an hour later the same rod was off again, and this one really went for it! At first it went hard for the far bank snags, but after sinking the rod as far as it would go and piling on the side strain, it changed its battle plan, heading off to the left and attempting to do me in a marginal snag. Luckily I managed to get it back in front where it went on several deep runs, and after almost 5 minutes I still hadn’t had a look at what I was attached to. It was angry that was for sure! It felt heavy and virtually at the first sight of it I managed to slide the net around it. 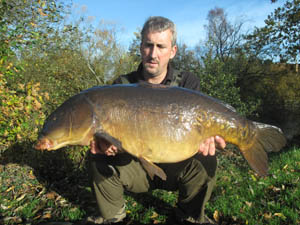 It was another mirror, but this time it was an old friend that I had had before one freezing January morning 2 years earlier. It was a stunner though and I wasn’t disappointed. It weighed 32Ib 8oz and made a lovely winter brace within an hour of arriving!

Sadly I lost another soon after, and although I stayed the night I received no further chances before I packed up the following day, but I left more than happy!