I’d always wanted to fish this particular the water, a venue that I was going to call home for the next 12 months. The lake was by far the largest water I’d ever fished on, roughly being around 43 acres in size, and with depths up to 60 feet it was also going to be one of the deepest.

With the terrible winter we had last year the lake was frozen solid for the first part of the year. Once it was fishable I started walking it on a more regular basis, taking notes and finding feeding spots with Polaroid’s. Whilst speaking to local anglers I realized this wasn’t going to be an easy water to fish so after chatting to angler I went straight home and went onto the website, looking at the stock of carp that lived in the lake and any more important information on the water. I now knew there were two known 30 pound carp in ether, with fish closing in on the magic 30Ib benchmark and I now started to get motivated.

I did a few nights early on in the year with nothing to show for my efforts and with summer fast approaching I knew the lake would be busy with public, mainly dog walkers during the daytime. Doing quick nights before work I was picking off the odd fish and with a hit of three fish under my belt I felt confident it was the lake for me and I still really wanted to get amongst the originals! So after watching the fish I picked my spot and started to bait it regularly over the course a few weeks.

With favorable weather conditions and the wind pushing into the corner I thought it was time to put a rig over the baited area. I had a hit of five fish, including a new personal best common of 27.10lb – my target achieved! 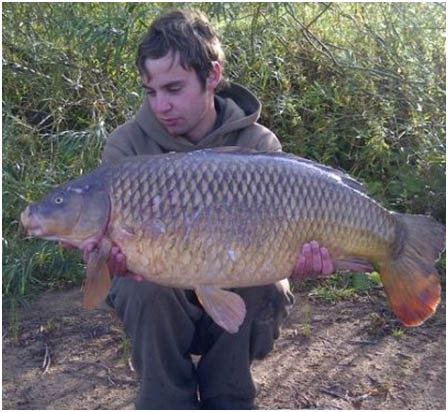 By now we were into early autumn. Following my success’s I knew my tactics were working so I carried on introducing the bait on a regular basis to keep them feeding on the spot. I went back on the following week feeling confident after my recent capture. All three rods we’re back on their spots with new rigs tied up KD style using a 6 inch link with a size 6 Gardner Long-shank Mugga hook.

Despite feeling confident in the rigs and location I blanked that night and feeling a little down I started to pack up. Suddenly I saw the tip on my right rod smash round and then give me a one-toner. After a 15-20 minute fight I finally got another original sitting in my net. As I looked down I couldn’t believe it, and when I hoisted her up on the scales it read out 28Ib 13oz making it a new PB mirror and common captured within a week of each other. I had finally started to get amongst the better fish!!

A couple of weeks passed, now we were getting into late autumn with the long cold nights just around the corner. I kept the bait going in on the spots using the Gardner Pocket Rocket. I found it was perfect as it doesn’t get caught in the wind and the boilies stay in till it hit’s the water.

Dropping on for a quick night confident that one of the known 30’s were due to come out very soon. The temperature dropped to single figures and it was a silent night with nothing showing it self.  I decided to go for a walk bringing the rods in while I went off looking for fish and thinking of a move.

Getting back to the rods I decided to stay put as I hadn’t seen anything.
Having tied up fresh rigs making them around 4 inches with new hooks – ensuring they were super sharp – I re-casted the rods out to the spots.

Just 10-20minutes later the middle rod ripped off and as soon as I lifted into the fish I knew it was a good fish. It pretty much came straight in before coming to life in the margin and after seeing the fish my heart was in my mouth. I knew which fish it was, a definite 30!
With one more big run I knew it was beaten. All the local anglers came to look at the fish that shows it face once or twice a year was laying on my matt looking at me. My first 30, weighing 32Ib 1oz. Magic!