The Horse! – by Sam Bascombe

The Horse is a fish I had been after for a few seasons now and it was really starting to get to me so I decided to fish November just for that one fish!

After a bit of information digging from mates that had caught it before, it became clear that there was one area of the lake that it seemed to like. This area had a nice set of snags to the right of the swim that also had good form at this time of year so this was going to be the plan for the coming month.

The spot I was going to fish was just down the right hand margin and I decided to only fish with the one rod and concentrate all my bait on the one spot. I had recently changed over from my summer bait to my chosen winter bait which was CC Moore’s ‘Live System’, and I was soaking them in the awesome Feedstim XP for added attraction .

I arrived on the Sunday and decided to fish two nights and start the priming of the spot.  Although I didn’t catch that trip I learnt a lot about the swim and even more important I saw The Horse in the snag which just blew me away! It was just sat there looking all big and gorgeous.

When I left on the Tuesday I gave the spot a good hit of bait – with 3 kilos of 15 mm Live System boilies. That week went so slow! I was desperate to get back in the swim and on my return the following Sunday I literally ran to the swim which was free, thank god.  I set every thing up and had a look in the snag but there were no fish to be seen which was disappointing.

I woke on the Monday morning feeling beaten and starting to think I would never catch my dream, The Horse.

Later that afternoon I replaced the rig, that was a bottom bait tied with a six inch length of Gardner 25lb Chod Skin connected to my old favourite size 6 Mugga hook. The hook bait was a standard 15mm Live System bottom bait. With everything set by 1pm, and a good half kilo of freebies spread on the spot it was time to sit back and wait…

That night was horrendous the wind was insane and was lashing with rain. 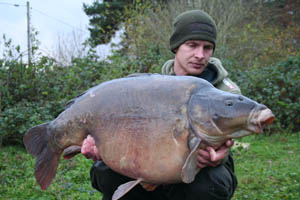 The take came at 5.20AM, and was just  a few bleeps and then the ‘click’ as the line came out the clip. I was soon down with the rod and thought something was wrong straight away as it felt heavy but was just coming straight in towards the net. The fight was over in less than a minute, and there in the net was The Horse!

I couldn’t believe it and got straight on the phone to my mate to come down to do the photos. At 52lb 8oz it was a new PB and completely blew me away. The photos were done and ‘The Horse’ was returned home… 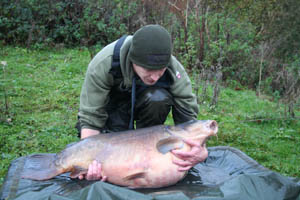 It was all over so quickly, and it still hasn’t sunk in now. I’d like to thank Lewis at Gardner for the great tackle and Ian Moore at CC Moore for the great bait. I’m blown away by this fish, and I don’t think  I’ll ever catch a fish that means more to me…