Hi to you all

I’ve just come back from fishing in France! Someone had to drop out the last minute and I was asked if I would like to take his place. Happy days!

There were nine of us on the lake, which was 19 acres in size and ‘L’ shaped which gave us plenty of room to move and was booked for 1 week. 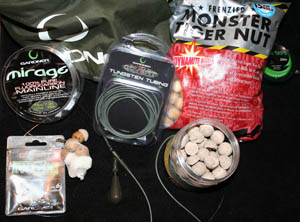 When we arrived we had a quick walk round and a chat with the previous week’s party who were in the throws of packing away. They said that they had struggled a bit for the week but they had all caught, with the biggest being 53lb, so after walking back to the lodge we had a draw for swims and I came out seventh. I chose the middle of the lake which gave me a lot of water to cast into. 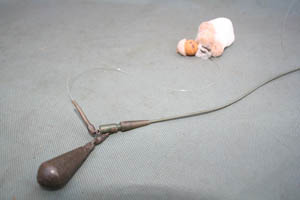 The lake was shallow, averaging four feet deep, and had a soft silty bottom. I lengthened my rigs to about ten to twelve inches, and as lead core was banned I was using some of the really heavy Covert Tungsten Tubing and using Gardner Covert Safety Clips with 2oz Ranger Distance lead.

The hook link that I was using was simply a length of  16lb Mirage main line with a size six Covert Incizor  – and the bait was half a fifteen mm Dynamite Baits Tiger Nut boilie, tipped with half a fifteen mm White Choc and Coconut pop up – to make it a balanced bottom bait.

Before casting out I would make a PVA bag with my Easi-Loada and put a couple of pieces of Dissolving Rig Foam in the bag with a few boilies (see picture). This would slow the lead down when it was sinking and keep it all from plunging too much into the silt.

The weather was absolutely terrible all week with a mixture of high pressure and clear nights (the nights were cold down to -3), and then on the Wednesday we had constant rain for 18 hrs! 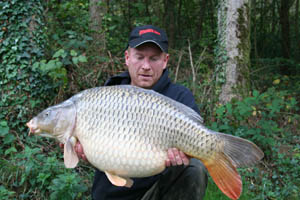 Despite the atrocious conditions it worked a treat, and over the course of the week I ended up with four carp the biggest being a common carp of just under thirty five pounds. Unfortunately not everybody in our group caught which was a shame, but the high light of the week was my work mate called Dessy who caught a fifty four pound mirror, so he was happy! Well done mate.

After getting back home I was eager to get back down my lake and see if I could bag a carp before the winter set in.  As the weather was very mild I planed an overnighter, the only drawback with this I had to pack up at 6am to go to work in the morning.

All day conditions looked really good for a take, I had all my gear ready and when I finished work I loaded my car and got to the lake. There were two blokes fishing already so I barrowed my gear to one of them and had a cup of tea and a chat. He told me he hadn’t had anything.

Shortly afterwards I set up in a swim that I fancied. There was a nice breeze pushing up the lake to my end, and as I was setting up I heard a splash and there in the middle was a big set of rings, it must have been a carp.

I cast both rods out to the area with a stringer using the PVA tape (it totally melts leaving no residue) with three boilies and a piece of dissolving foam on it so when it melts the foam floats to the surface. Once I see the foam on the surface I can catapult some bait accurately onto it and on this occasion this meant twenty boilies on one rod and just a stringer on the other one.

With everything all sorted for the night I hoped the bream would leave me alone. By the time it had got dark another three blokes turned up to fish and two of them went opposite me. I was thinking to myself ‘I hope a carp doesn’t show again’ because I don’t really want the blokes opposite to cast out to far, luckily they were only casting 20-30yds out so that’s fine I thought.

After dinner I tied a couple of new rigs. It was about 10pm so I decided to get my head down. It was nearly midnight when I woke and heard a carp jump out and it sounded like it was right over my left hand rod. I just lay there for a minute or two then rolled over and went back to sleep until 5AM when I had a couple of bleeps on my left hand rod I noticed the bobbin was against the rod. I jumped out of my sleeping bag and grabbed the rod and lent into a powerful carp. The fish took a bit of time to get in but once in the net I thought happy days. 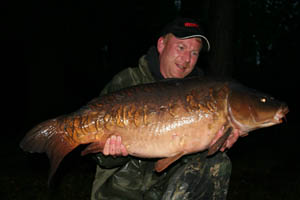 I looked in the net and saw a stunner of a linear mirror, a proper old strain, so I unhooked it and left it in the net while I phoned a mate to help me with the pictures. It weighed thirty two pound so with all the photos done I slipped her back and put the kettle on for a cuppa then started to pack away for work.

These were the highlights of October – roll on November!