Summer had really flown by for me, and before I knew it the days were becoming much shorter and the leaves were steadily falling from the trees. However the feeling of doom towards the imminent arrival of winter was offset by the promise of some autumn big carp action beforehand.

I had just completed 3 solid blanks in a row, and in all honesty during any of those 2 night trips I didn’t feel I was even close to catching anything. On the last 2 trip fishing on my local syndicate, I didn’t even see a fish during my entire stay. With October half term coming up I had promised my 7 year old son Thomas a trip out, and therefore towards the end of that week we were hurriedly packing our kit and getting ready for a session on another local pit.

Around this time I had contacted Gardner Tackle seeking advice about changing main line to a fluorocarbon, specifically to achieve better line concealment during the winter months. Lots of my friends were on it, and as I had never tried it I had the distinct feeling I was missing out on an edge. I was soon spooling up with the Mirage in 14lb (0.35mm), and it did look and feel totally different to me, but as I hadn’t changed my brand of main line in over 10 years that wasn’t too surprising!

I did feel that when the water is at its absolute clearest, it would certainly be an advantage to have a clear, very fast sinking line and that the best way of disguise the lines presence and give the most subtle presentation would be to have it pinned down on the lake bed. With my rods all made up we set off full of anticipation.

The lake itself was deserted on our arrival, but I knew from previous autumn trips exactly where we wanted to be. The deepest part of the lake was a good starter, but this was also an area that had the greatest cover on the whole lake in the form of overhanging trees.  Indeed this proved to be correct as a fish rolled as I was pushing in the bank sticks. We soon had 3 hook baits out positioned close to the far bank; 2 on stiff linked pop ups tied up with the new size 5 Covert Chod hooks that are soon to be released, and the other on a simple snowman rig on a size 10 Mugga.

Going back to the Chod hooks, I have always looked for “the one” with pop up hooks and these are definitely it. Being the perfect pattern, razor sharp and strong without being overly thick in the wire I know I’ll never use another hook when it comes to my favourite chod and stiff links. I had also scaled down in everything to achieve greater finesse, including changing to ultra thin Plummet leadcore leaders in 25 lb, and the nicely camoed 1.5 oz chod finish leads. 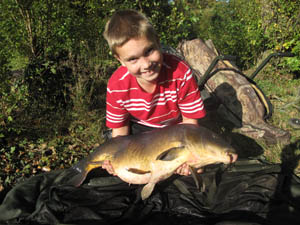 With the rods out we sat in the late afternoon sun watching the water as the odd fish showed in our general area. A few bleeps from the buzzer came from Thomas’s rod, and I looked up to see the tip bending down as the clutch began to click away. A 12 foot rod isn’t ideal for a 7 year old but he somehow managed to control it and the fish as I carefully set the clutch for him. A few minutes later and I netted his first totally solo caught carp of 22lbs, which was one of my most memorable carping moments too. Well done son!

Just 20 minutes later and my rod was off, starting with the tell tale few slow bleeps of a chod rig hooked carp before it was absolutely flying. This one really tested out the new line, as I had the top section pushed completely under the water in a bid to keep the line clear of the mass of tangled branches.

It was really going for it, and I had a feeling I knew what fish it was going to be, as its power was unreal. Sure enough after a brief stalemate I saw the golden flank of a common roll, now out in the open water and in relative safety. The battle still wasn’t over as this fish is built for fighting and I had another 5 minutes of powerful runs up and down the margins to contend with before I pulled it over the net cord. 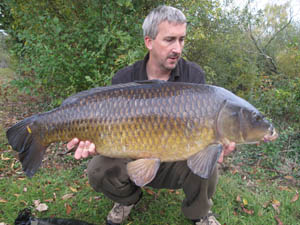 It was an old friend from the previous winter and one that clearly has a liking for Essential B5, but an absolute stunner none the less. Weighing 30Ib 4oz it capped a fantastic joint session, and has spelled the end of what has been a lean time for me of late.