I had been planning a trip to Horton Church Lake for a few days, and had booked off the Friday so I could get there after work on the Thursday giving me two nights fishing, as I had to be home early Saturday.

Arriving at the lake at 7pm on the Thursday it was quite busy so I grabbed my bucket and went for a walk round starting on the plateau side and all the swims up to Weedy Bay were taken. Stopping for a while in ‘Weedy-Bay’  I spotted a couple of fish just sitting in the weed so I placed my bucket in there thinking that would be a good place to start and I carried on with my walk round.

Approaching Dog bay I found that most of the swims were free. It had just clouded over and started to drizzle, so I took cover under a tree in Shoulders Swim until it past. Whilst sheltering there I could make out small patches of bubbles moving around the swim very close in, so I waited to hopefully see what was causing them.

The rain stopped and Dell the Head Bailiff walked up and I showed him the bubbling and we both came to the conclusion that they were caused by fish, but I just needed to be certain before going for them. With that a big black mirror came out to its middle and then slowly without a sound slid back in with hardly a ripple! As my bucket was in Weedy-Bay I took off my hoodie and left it in the swim while I ran to Weedy bay to retrieve my bucket. Once the swim was secured it was back to the car to retrieve the rest of my tackle.

The weather was blustery and set up between the showers that were being blown through. I was really excited, and had worked out the patrol route that the carp were taking around the channels in the ribbon weed, Information that in turn enabled me the opportunity to work out where to place my two hook baits. 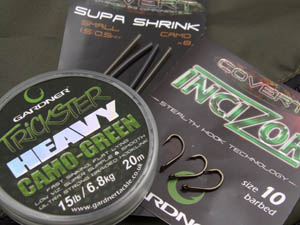 I was going to stick with the Dynamite XL sweetcorn and I was going to use a new Gardner braid called Trickster Heavy for the extra movement achieved by the suppleness along with the ever faithful Covert Incizor size 10 with a piece of shrink tube curved.

For the hookbait I was using Enterprise Tackle  pop-up corn and sinking corn balanced with a small split shot on the hair. As the fish were working close in to the margin I made up some longer Green Plummet Leadcore leaders around 8ft to help pin down to the end tackle so as not to spook any fish in the area.

I was going to position my hookbait and bait up with a Gardner spoon and pole to keep everything as accurate and quiet as possible, and made up a PVA bag of dried corn (dried off using kitchen towel), simply hooked on the hook. Then a nugget of Gardner Dissolving Rig Foam was placed around the hook to prevent any debris getting caught up on the hook point. 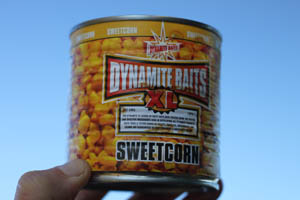 Finally all this was placed in the spoon and dropped precisely where I wanted it, followed by a whole tin of Dynamite XL corn also put into spoon again shipped carefully out into position and tipped over the area where I had seen the fish.

The lead landed with a satisfying thud. I waited to see the foam pop to the surface to make sure was perfectly in position. Spot on! Now that rod was sorted it was time to get the other rod ready and in position.

Whilst I was stood there threading the Mirage through the rings on my second rod when I heard my spool on the rod I just put out spinning! I hadn’t turned my alarm on as I was waiting for the line to settle, the run had come so quick.

I picked the rod up to find the fish had made it through quite a bit of weed, but I could still feel the fish on the end and managed to gain control and steer him through the first weed bed with the ribbon weed being cut by my main line and floating to the surface. Then all of a sudden it all fell slack and I retrieved everything. The hook had pulled I was gutted!

It was totally my fault, I didn’t believe it would happen so quickly and was left shaking. I repositioned the rod and I would not make the same mistake again hopefully. Having managed to get both rods in position using the baiting spoon method it was time to set up my home for the night and put the kettle on for a much deserved cup of tea.

I was all set up and relaxing watching the occasional fish show in the area when the same rod signalled a few bleeps then went into complete meltdown. Despite having set the clutch tight the fish was taking line at an alarming rate, I picked up the rod and it took on its battle curve I applied lots of pressure to stop the fish gaining the sanctuary of a snag further out, and managed to stop and turn her only for the hook to pull again! I was broken. The ribbon weed was aiding the fish to quickly get rid of the hook.

It was obviously time to rethink my approach.

I decided I wanted my lead to eject on the take, which would make the fish rise in the water making landing the fish easier. So I got a Covert Lead Clip and cut a piece off the lead arm. I also did away with the tail rubber – as I was positioning my hook baits with the spoon it would be possible to get away with this.

Once both baits had been repositioned with the new lead arrangement I had a few people turn up and because of my recent action two people set up on the left of me and one on the right. I was a bit fed up as the people to my left were quite noisy and I was only fishing close. 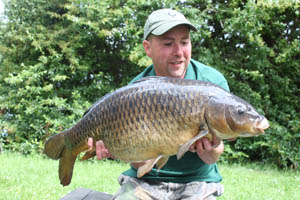 When my left had rod signalled a take I was on it fast! I picked up the rod and bent into a fish which was shaking its head trying to get rid of the hook the lead had done its job and had fallen off on the take and the fish was on the surface and I could see it was a nice common which I just led to my waiting net. Once safely in the net I let out a cheer with relief, the slight change to the terminal tackle  had proved enough to get the fish in the net.

The fish turned out to be one that I hadn’t had before called ‘Reggie’, I was really pleased with the way the method had worked, if only I had done that in the first place but never mind I had landed one.

With the rod repositioned I had some tea and got an early night, waking at around 2am when it was quiet to have a look at the area. Sitting quietly watching the water I saw the guy in the next swim to the left of me cast about 2ft from my hook bait and proceed to put about a kilo of boilies on top of it! Total bad angling…

I was already going to pack away early and get out of there as I thought that had obviously blown my chance of a take on the left hand rod. I went back to bed fuming. My alarm clock was set for 5am and as I woke up I was greeted with a nice carp show down the margin near the right hand rod, this rod hadn’t produced a take yet but it obviously looked promising now.

The weather again was showery, with a nice North Easterly wind blowing straight into my swim. The fish activity increased, with a few more showing around the weed down to the right. The angler pressure to my left had moved the carp to the other side of my swim. I made a last cup of tea and started a slow pack away when the right hand rod melted off.

I quickly picked the rod up and again commenced battle. Things were going to plan as the lead had ejected and the ribbon weed was getting cut by my mainline and floating to the surface. All of a sudden it was a bit of stale mate, when everything went solid… Keeping the pressure on the fish started to move again and came to the surface with a bit of weed covering its head – which calmed it down, and I just led it straight into my waiting net. 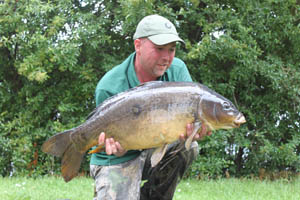 Once I had all my unhooking, weighing and camera ready I got her out and saw that again it was a fish I hadn’t caught before called ‘Split Pec’, I was well chuffed with my result four takes in 24hrs. Admittedly I lost two and had to learn the hard way, but the change to the lead arrangement enabled me to land the last two so in all it was a very enjoyable session. Content,  I packed everything away and made my way home…