NO KIDDING! – by Dan Chart

Dan Chart cons himself into catching a 40!

This time last year I couldn’t put a foot wrong; turning up at my syndicate lake, always expecting a bite and generally getting one! How much can change in a year. The weed had never really died from last year, which was amazing when you consider how cold the winter months were, with green strands being clearly evident among the dead rafts. As soon as spring arrived the weed started to take off at an ever-accelerating rate, making angling extremely difficult. Drifting out in the boat and targeting specific areas, I struggled to get anything going and just wasn’t getting that feeling that the fish were ‘having it’. I’ve already written on this site about the capture of my PB, which I caught in the late spring and was rather hoping my good fortune would continue, but to be honest it all went a bit flat. A couple of recaptures and a nice mid-20 common left me hopeful, but eventually I had no choice but to really work hard in trying to land my next fish.

I wasn’t on my own struggling to get the bites, and all my other mates fishing the water were despondent with the lack of action. The other problem we were encountering was not finding them, not seeing them bosh or roll, pretty much not doing anything really, almost as if there was nothing in there. Eventually, late August rolled along and at last I began to find a few moving about in the snags at the back-end of a swim that has been very kind to me in the past. The problem was, I couldn’t get a bait anywhere near them. The weed was solid all the way around the snags and it was two feet below the surface in ten feet of water. The closest cast I could make to them was a good 20 yards away and due to the lack of time I get, which is mainly one night a week, I wasn’t going to be able to change the situation and would just have to get as close as I could and give it a go. 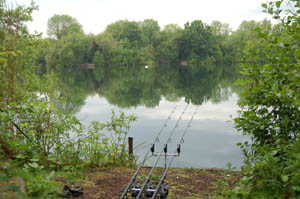 One spot I found was hard silt merging into gravel, surrounded by walls of weed, and the other was soft silt, perfect for the ever-consistent Choddy. Gardner kindly sent me some of their yet-to-be-released size 5 Chod Hooks to try, which at first glance, looked the best out there for a 16mm-plus pop-up, so I was keen to see what they could do for me. A double bottom bait presented on a size 6 Mugga, tied blow-back style with 15lb Sly Skin, 25lb Plummet leadcore and, my favourite size 3oz Bolt Bomb connected to the the new Covert lead clip. I needed the lead to release as quickly as possible to get the fish to rise in the water and give me a better chance of landing it. The last thing I wanted was to let the fish dive straight into the depths of the neighbouring weed beds, where those tangled stems are strongest and hook-pulls are more and more likely with every inch the fish descends. 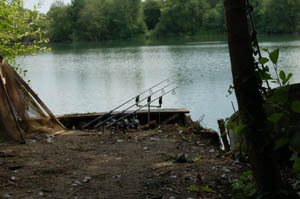 Scattering numerous Scattered Baits ‘Aquatix Anchovy’ to the soft silt area and, heavily applying them to the hard spot, meant that I was hoping the carp would be up for a feed. This baiting approach was more a product of desperation and blind optimism rather than logic and deep thought, and I had absolutely no evidence to suggest that they wanted to get on the munch, but I was certainly not going to sit there fishing over scraps of bait. These are big fish with traditionally big gobs, and I had to educate them to get on the feed. I’d sold the plan to myself and I was almost confident as I listened to my bedchair creak in the silence and I strained eyes and ears for anything to endorse my faith. Things rustled in the brambles around my bivvy and foxes hunted rabbits in the field behind me, but not a carpy sign came my way as I drifted off to that half-sleep we know so well.

The night passed in fishy silence until 3am, when the alarm let out that glorious, one-tone call to action. Even before picking up the rod, I remember screaming ‘YESSSS!’ I was just so happy to get a bite after what seemed ages. It was the rod on the hard spot that was trying to fly off the rests and my plan had worked with the fish on the surface the moment I lifted into it. I set my clutches a little tighter than normal in an effort to get the fish to rise and the Covert lead clips are superb for ejecting the leads rapidly. 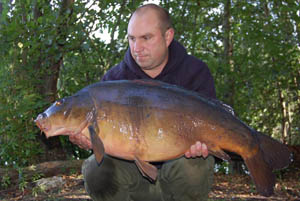 Despite being half-asleep and playing the fish in the dark I did a reasonable job of landing it from the bank, but when it came to taking the hook out I had to slap myself around the face a few times before eventually realising it was down the back of its throat, and long nose pliers had to be deployed to remove it. That was one hungry bugger! On the scales, it wrenched the needle to 35.15, and I was soon posing with a fantastic-looking mirror that made all the problems I’d encountered over the previous months disappear.

At 7am the next morning, the choddy rod rattled off, leaving me in a tough battle with a furious, and stunning, 25lb common. I was pleased to see the size 5 Chod hook doing the business, with the fish properly nailed and not a bit of movement from the hook. That’s me sold! 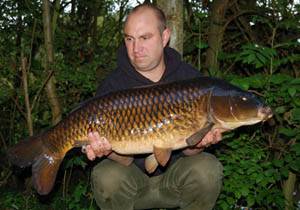 I returned the following week, trying my luck again but kind of knew the moment had gone. The previous year, I fished all my rods a lot closer to the snags at the back of the swim but as already mentioned the weed was preventing me from doing so. The following morning I decided to don the life jacket and have a mooch out in the boat and straight away I spooked three good-sized fish that were again loitering around the snags. To the left of those snags the weed had lost its foothold here and there and with a little bit of work I reckoned I could create a presentable area to position a hook bait. The right-hand side of the snags, one rod length away, I could make out a small hole about a metre square. It was a 60-yard cast from the bank, but I thought I could land on it with a bit of luck.

The main obstacles I faced were the surrounding high weed beds and the time available to me due to the heavy workload I had on. It meant arriving late in the afternoon at best, and fading light has never been a friend to accurate casting. I prepped the area during the week nights with a few buckets of hemp and an ample supply of Mr Elmer’s Aquatix Anchovy boilies every other day.

After finishing the day job, I flew up the M25 to get through the gates at 6pm, knowing I had an hour to get the rods out. Choosing not to use the marker float and getting through a fair few Gardner foam nuggets, the first difficult cast was achieved, with the lead slicing through the water, unhindered by weed before hitting the bottom with a satisfactory ‘donk’. This had the same trusty bottom bait set up as before, while the other rods were positioned on the areas I’d prepped heavily with hemp. Although I wasn’t convinced the fish had worked the area as well as I liked, I felt the baits were more than presentable using the chods. 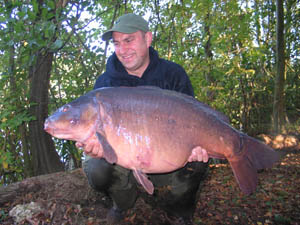 That night was different and I didn’t need to kid myself into believing they were out there. I was convinced I could hear fish in the snags and the ripples that were meeting me on the bank confirmed this. Just after ringing the wife to say goodnight at around 11pm I heard what sounded like a fat person falling in. It was definitely a fish, and it left me shaking with excitement and unable to sleep for nearly an hour. I felt so confident, and after having a fairly decent night’s sleep, the buzzer woke me up at the time the kids normally do, 6.30am. The fish powered into the high weed bed almost immediately, despite the lead clip doing its job again. However, everything was moving and I cranked it toward me, knees trembling, silent prayers being offered, dreading that ‘ping’ as the rod loses its curve, right up until I managed to scoop up the whole weed mass from the bank and prayed that there was something wonderful in the bottom of the net. Thankfully there was; in the form of a superb 41.01 mirror, which seemed to quiver in frustration that the weed had prevented it giving me a proper fight and running me all around the pond.

John Elmer kindly came over do the photos, and although he listened carefully to my instructions on how to cross the river that divides the lakes, he still managed to lose a trainer and get stuck in two feet of stinking silt. Laugh? I nearly did a wee! In fairness, he did get a laugh back when I went full-fathom-five in the margins and got soaked. Shame – it was nearly the perfect session!