There are times when we all sit fishing for carp with an element of doubt as to whether we are in the right areas, or the weather conditions are as we would like them, or even as to whether the fish are “on the munch” or not? There are also times for me personally when I don’t always feel like making the effort, be it due to work or family commitments; however it is usually the times when I push myself to get out on the bank that I reap the rewards for my efforts. I had a particular session recently when the above applied and after landing three fish including a 31lb 12oz common I felt that my efforts had indeed been rewarded.

After a week of twelve hour shifts and extra days doing overtime I finally persuaded myself that an overnight session after work might be worth a go despite feeling knackered. Wednesday was to be my last day “on shift” so I got up early and sorted my kit and loaded it into the car ready for an overnighter when I finished work at 6 p.m. The last two hours at work really dragged, but as soon as the clock hit six I was out of there and heading over to my syndicate water at a rate of knots.

I knew I only had about 45 minutes of daylight in which to set up and I had also arranged to meet a good friend of mine, Ryan Bull at the lake as we hadn’t done a night together for a while. On arrival there was a light breeze blowing and it was still unusually warm for the time of year, I decided to do something I wouldn’t usually do and on arrival rather than have a good look round just opted for a swim just down from where Ryan was fishing with the view to sharing a bottle of red once set-up and settled. 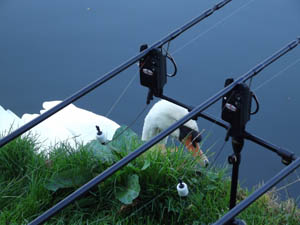 The swim I decided to fish is known as Number 1, from which you can cover a lot of areas. My chosen bait was as usual Mistral baits i40 Red. My rigs were also as always very simple, the only difference being my hooks, I am currently field testing a new range of Continental Muggas from Gardner which I decided to fish knotless knot style using short hooklinks tied with Gardners Subterfuge Supersoft Fluorocarbon hook link material in conjunction with a leadcore leader and Covert Multi-Clips leads clips. My hook bait on all three rods being a single 20mm i40 Red.

The first of my three rods was cast about two rod lengths from the edge of a bush which hangs out into the water along an area we call the railway bank, with around 200 i40 Red freebies scattered loosely around the area. Early season you can get tight to the bush but as the weed grows you need to cast a bit further out which for me isn’t a problem as you are fishing on a nice smooth bottom and an area where I have taken a lot of fish from at this time of year. My second rod was cast around 60yds across the lake to some overhanging willows; the bottom here is again of a smooth nature but rather than being a mixture of clay and gravel it is quite silty. I quickly marked my line so that I could clip up and hit the spot again should I get a take in the night and then once again added around 200 freebies to the area.It was to be the second time I had used my new Sonik SK4 rods and the third of these was cast about 120yds to a silty area at the back of a gravel bar. Once I was happy with the spot I was on, I put around 200 i40 Red boilies on the area using my Gardner Skorpion Stick.

Although I wouldn’t normally just drop into a swim like I had, I was happy with all three spots and quietly confident that I would have a take in the night. I quickly set up my bivvy and bedchair and then headed for Ryan’s swim next door armed with my receiver, chair and a bottle of Merlot! Ryan had kindly picked us up some dinner and we sat until almost midnight putting the world to rights over some grub and a glass of red. Although we hadn’t yet had a take it had been an enjoyable evening but after a 12hr shift that day I decided it was time to get into bed. I wished Ryan all the best for the night and headed off to my swim. 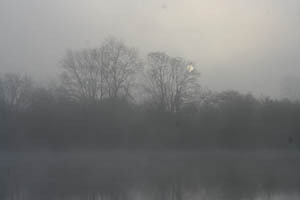 I’m not sure if it was a combination of the long day’s I had worked during the past week and the red wine, but despite my reputation for being the worlds loudest snorer I awoke after an unusually good nights sleep. It was just getting light and as I looked out of my bivvy I couldn’t help but feel a little surprised not to have been woken in the night by a fish. What also greeted me was a flat calm lake with a heavy mist rolling across it. Now don’t get me wrong I have caught well in these conditions in the past, but never on my current syndicate water and for this reason felt that maybe my chance of a fish had gone and wasn’t overly confident of an early morning take as I headed off to Ryan’s swim to see if he fancied a cuppa.

How wrong could I be? 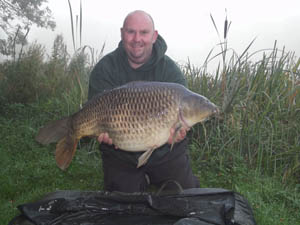 Being the early bird that he is Ryan was already on his first cuppa so we started chatting, the main context of my input being that I couldn’t believe we hadn’t caught in the night and I didn’t fancy our chances with the way the conditions had turned out. After about half an hour Carp fishing’s answer to Victor Meldrew headed back to his swim to put on the kettle for a cuppa. I had just found my lighter ready to put the kettle on when totally out of the blue my right hand rod ripped round and I was into what felt like a decent fish. It was a slow plodding fight, which you normally expect from a half decent fish and after about ten minutes she was ready for the net. Ryan had turned up for his cuppa so obliged with the net. Just as he was about to do the honours my middle rod cast 120yds to the back of the bar ripped off, we quickly landed the first fish and then Ryan headed off to get his landing net whilst I played the second fish. As I was playing the second fish Ryan commented on the common that was already in the other net describing it as a chunky fish that he thought would probably be a thirty. After yet another battle of around ten minutes the second fish was landed a lovely chestnut coloured mirror which we put at around mid twenty.

With both fish safely in the net I got my sling, scales and camera ready for weighing and photographing the fish. As I lifted the common out of the water I could tell it was a decent fish and would almost certainly hit the thirty-pound barrier. I was proven right and once on the scales she went a satisfying 31lb 12oz, not a bad fish considering the “crap” conditions!!!!!!!!!!!!!!!!! 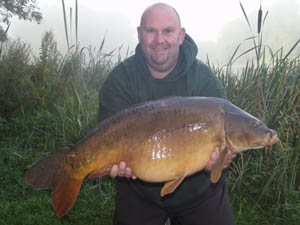 Photographs were taken and after returning my prize the second fish was weighed and photographed, we were slightly out on our judgements and on the scales she went 26lb 10oz. One of my rigs had taken a battering but the other, on inspection was still o.k so before finally getting a chance to put the kettle on I recast my freshly baited rig 120yds back onto the spot and put a few more loose offerings out. The kettle had only just boiled and I was in the process of tying a new rig for my third rod when yet again the middle rod was away. This time it was a cracking scrap and I was connected to one of the lakes mirrors that have huge tails and always fight with every ounce of power they have, after a fantastic fight in the margins the net slid under a nice scaly mirror that on the scales went 26lb 6oz. Once again photos were taken and she was returned to fight another day. 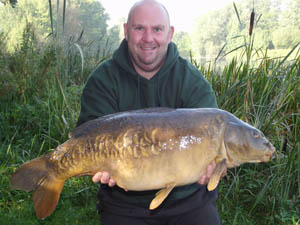 Once again, as often happens in carp fishing, I had been proven wrong and despite my doubts with regards to the conditions I had landed three fish within the space of an hour. I had caught again on my Sonik Sk4’s and was pleased with their performance, Mistral Baits i40 Red had done the business as usual and the new Continental Muggas I was using had stood up to and equalled the quality and performance of their Covert counterparts so as always, hats off to my sponsors and their products.

It always amazes me how anything can happen at any time when we are carp fishing so next time you perhaps don’t feel like heading off fishing, make the effort and if the conditions maybe don’t favour your style of fishing or venue stick with it because anything can happen and I’m sure my latest session won’t be the first or the last time I am taught this valuable lesson!

Until next time – tight lines.