This season I’ve been putting all my time and effort in to a syndicate lake in the Avon valley near Ringwood, a lake known as the Roach Pit and run by CEMEX Angling. This lake is a 20 acre gravel pit with an amazing stock of big stunning carp, containing between 60 and 70 fish with 2 of those being around the 50lb mark!

The Roach Pit is a very weedy and pressured lake that is fished by some very good anglers, consequently carp are by no means easy to catch, as over the years they have seen just about every rig and baiting situation there is, so I had to think long and hard about how I was going to tackle this tricky venue….

The first thing that came to mind was rigs – and after doing a bit of research on the lakes largest residents it became clear they all liked a boilie and mainly seemed to be caught on bottom baits so that was my starting point.

Before I knew it the season had started and I got amongst the fish pretty quickly, landing some lovely looking fish up to 33lb which was a great start, and far better than I had realistically expected.

It soon became clear to me that nigh on every one was using standard bottom bait rigs so I decided to play around with a pop up presentation on at least one rod and set about putting a suitable rig together. A good starting point was the well known big fish rig ‘The Hinged Stiff Rig’ –  the only thing that I didn’t like about this rig was the loops on the boom section as I’ve always thought that they might be a weak point, and although I’ve never had one go it always played on my mind. After a little more thought I solved the doubts in my mind, the answer was simple, just tie the boom section with a supple coated braid, tying both ends with a 5 turn grinner knot to ring swivels either end. This would still give me the movement the loops did but made me feel more confident in the strength of the rig. Now all I had to do was put it all together!

The components I chose for the rig were 25lb Gardner Chod Skin for the boom section. This material was specifically chosen because it is supple, but still just stiff enough to push the rig away from the lead, and was a really nice colour. An important consideration with any hooklink. This was tied to two size 12 Gardner Flexi Ring swivels with a simple five turn grinner knot. For the all important pop up section I used the 20Ib Gardner Trip Wire and tied to one end of the boom section with a small piece of Critical Mass tungsten putty to balance the pop up and the hook. The hook I chose was the Covert Chod Hook this hook. It is really strong and very reliable pattern, and the size 6 was just about perfect for the size hook baits I would be using. All that was left to do was put it to the test! 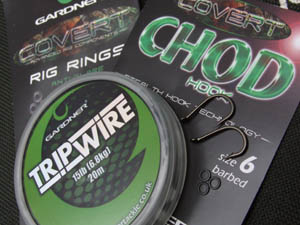 The following Sunday saw me arrive at the lake around 6am, and within an hour I had found a fair bit of sheeting in an area at around 50 yards range. Not wanting to disturb the spot I left it until mid-day before I cast a lead on to where I had seen all the bubbling. The last thing I wanted to do was spook the carp as they were feeding, but buy midday the feeding activity had stopped. 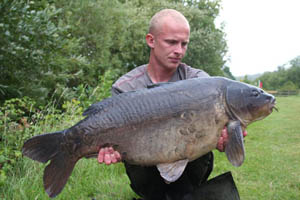 I must of got back to the swim around 5.30pm and cast my two pop ups out onto the spot. They couldn’t of been in the water an hour when I had the first take that turned out to be a stunning fish known as ‘The Grey One’ at 35lbs!

I was very happy that the rig had done its job and the carp was nailed in the bottom lip. After the fish was returned I put the rods back out and deposited six fresh spods of pellet and boilies onto them just to top it up for the night. The hours of darkness were very quiet but at 5.45AM one of the rods was away, this time the ensuing battle ended with a low twenty mirror safely enveloped in the net.

Luckily that fish didn’t wipe my other rod out, so rather than disturb the area and risk spooking the other fish that where obviously still feeding on the spot I elected to leave that rod out the water for the time being. 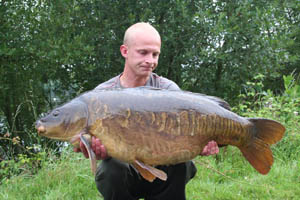 The next take came at 7 AM, and this time it was clear this was one of the lakes ‘A Team’. After an epic battle the net was slipped under what I honestly think is one of the best looking fish in the country – The Big Lin’ that weighed in at 42lb 8 oz! This fish rarely gets caught so my confidence in the rig and bait was really sky high.

Getting the rods back out by 8.30am I was just putting the kettle on for the lads that had helped out with the photos when one of the rods was off again! This was truly unbelievable – five fish a year is a result on this venue and I was into my fourth in 36hrs. Once again I had another of the highly sought after ‘A-listers’ in the net; the gorgeous 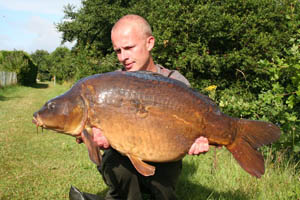 ‘Barbs’ at 39.12. She was spawned out but I wasn’t complaining. Photos were soon done and she was returned.

With all the excitement I had completely forgotten that I still had the other rod still on the spot – that was until my receiver let out a sound that made me jump out my skin. ‘This couldn’t be real’ I was thinking to myself as I was playing my fifth fish of the session, this time a high twenty at 28lb 4oz. I couldn’t believe what had happened and still don’t know. 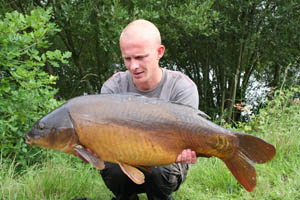 It just goes to show that it’s worth experimenting sometimes, and if you’re looking for a rig that’s a bit different give this one a try and see how you go. I know I’ll be using it a lot more from now on.