With the school holidays almost over I could finally return to some kind of normality, my angling over the last few weeks had been mainly kept to a couple of local waters where at least the family could spend time with me and enjoy the sights and sounds of the outside world. To be honest I’d enjoyed myself so much when school term started I decided to keep things local and see if I could winkle one or two of the better fish from my home ground waters. 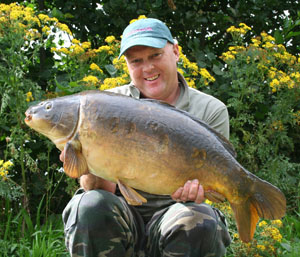 The saving in fuel alone was worth staying local as the prices of filling up and time spent travelling was getting tough! A couple of short day sessions seemed the ideal tonic I needed and with a couple of pretty 20s falling to my roving tactics I was soon getting in the swing of things. Despite these early results it soon became clear that others were doing well and catching over beds of bait. With his in mind I decided to ditch the hit and run tactics and start to apply a good food source on a regular basis. With the super results I’d already had recently on Richworth K-G-1 it was an easy decision to keep on the bait and give them as much as I could on a regular basis. 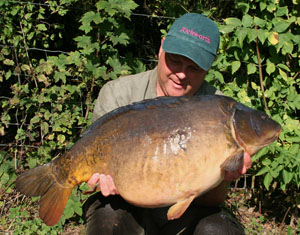 In my experience September’s always a good time to feed boilies the temperatures are cooling and the fish will start to feed heavily, so a good food bait applied in the right spots should bring the desired results. I started by selecting a couple of areas of the lake and after spending some time with the marker and bare lead identified a couple of silty areas covered in bloodworm. These seemed perfect and soon I was letting fly with the Gardner XL Pocket rocket depositing both 14mm and 10mm K-G-1 Baits. 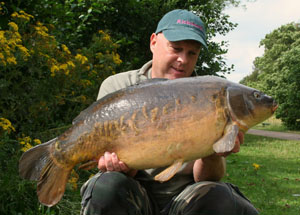 At a range of over 100 yards  the job was not as easy as it first appeared especially in strong cross winds but with the right gear I soon had things sorted. A purchase of a couple of Daiwa Spod reels made the job easier as their fast retrieve and excellent line lay helped no end. The first couple of nights produced a couple of nice 20’s as well as a lovely silvery common of around 17 or 18lb, all falling to my usual homemade K-G-1 pop-up hook baits these were fished low to the bottom perhaps just half an inch just so the size 8 Long Shank Mugga could sit up and beg giving in my view the ideal presentation. Sharpened to hypodermic quality with the super JAG hook sharpener the fish only had to close their mouths round the bait and they would be nailed!

The next session was a 2 night effort and after spodding a kilo of 14mm baits out to the usual spot I positioned all three rods at exactly the same distance (107 yards) but fanned them out slightly lining them up with 3 separate far bank features. The first night a blistering take at 4 am had me scrambling out and bending into the fish even at that range the rod bent over and I could tell a descent fish was out their shaking its head desperate to clear the hook from its lips. The fight was steady though not really spectacular and within a few minutes I had her rolling close in ready for the net. After a couple of lunges and a little pulling close in I was soon able to slip the net under her without any problems. 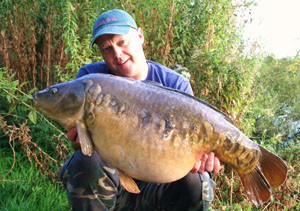 Switching on the Cyberlite head torch revealed a decent sized fish, one of the lakes known 30 lber’s and one that had become a regular visitor to the bank in recent times. Despite this she still looked superb and I quickly sacked her up for a couple of hours and arranged with a friend to come down at first light to help out with the pictures. She behaved superb and looked as well in the daylight as I’d expected. With her safely returned I spent the rest of the day preparing fresh rigs and catching up on a little sleep.

I’d been feeling unwell for a week or two and knew something wasn’t quite right but like all men tried to disregard and ignore some of the pains and aches in my back I was getting. The second night I prepared the swim in the same way another 300 or so 14mm baits were spodded out and the hook baits re- positioned once again. Just on first light the middle rod ripped of leaving me in no doubt what was responsible, another chunky weight could be felt kicking away at range as the rod arched over and I was forced to give a little line. In my haste to get to the rod I somehow managed to twist my lower back and almost immediately could feel the ache getting worse as the fight went on. With the fish doing its best to put as much line between us and the pain getting worse the fight was far from enjoyable. Eventually after a few minutes I had her wallowing close in and despite trying to tangle around my other lines luckily I was able to bundle her into the out stretched net. Looking like this one might go 30 I hoisted her up on the scales and doing my best impression of Quasimodo managed to record a weight of 29lb exactly. I sacked her for a short while and set up the camera gear once again ringing a friend for assistance. Once she was safely returned it soon became clear just how much pain I was in in-fact I had difficulty walking never mind packing away my gear. With a little help all was soon sorted but then the next 36 hours were spent at the hospital where I had to undergo a multitude of tests and x rays! 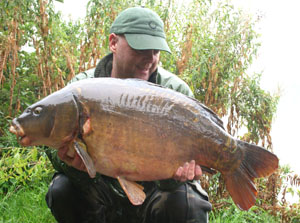 To say I’m out of action for a while is an understatement, but with the autumn here and the big ‘uns on the prowl I’ll be doing all I can to return to full health and keep the rods bending!