Winners of the IV National Carp Fishing Final for Spain

We would like to congratulate all of the competitors that took part in the “IV National Carp Fishing Final for Spain” that took place in Caspe, Zaragoza between 29th June to 3rd July.

This year the event was hosted by the Aragón section of the Spanish Angling Federation, and was sponsored by Gardner Tackle together with Blackfish (Gardner’s national distributor in Spain).

Held over 3 days, the event involved 43 pairs from across the country, competing for both individual and team medals over 3 sections. 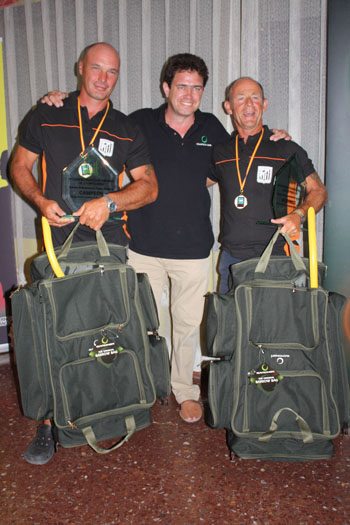 Although fish were initially caught from throughout the three sections it soon became clear that local tour guide ‘gurus’ Paul Booth and Barry Wilson – both permanent Spanish residents and fishing for the hosting province Aragón – had begun to accumulate a massive lead. Each day they successfully consolidated their position and the  final results saw them crowned champions after capturing 30 fish to over 19kg (!) for a grand total of 272.170 kg – a phenomenal result.

Third place went to Clemente Pozuelo Lopez and Juan Arcadito Fernandez of Andalucia, who caught 27 fish between them for 178.600 kg.

The team medals were awarded as follows:

Gardner Tackle would like to congratulate all of the anglers and organisers involved, and especially the winners Paul and Barry for becoming Spanish National Champions for 2011! Well done.