The Common Factor – by Tim Childs

With the August school holidays now in full flow and the demands of the family to be met, my time was suddenly cut to a bare minimum. Trips to the zoo or cinema where thrust upon me as well as a multitude of chores and responsibilities at home. 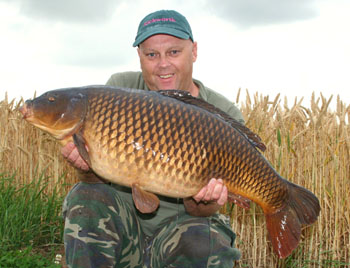 I needed to make the most of my short day trips or quick over night sessions if I was to keep the bobbins moving. My next couple of trips were successful as well as enjoyable as I managed to land a string of commons over 20lb. Including a really nice humped back golden coloured common of just under 26lb and a long lean one of just over 26lb. 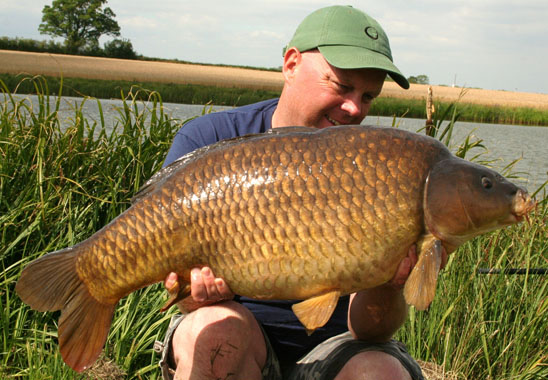 With time suddenly restricted I made a quick decision to fish a short afternoon session on a new water not a million miles away from home. Despite its popularity I’d never actually got round to fishing the venue so with the weather looking good a quick afternoon trip seemed just the tonic I needed.

Having arrived at around 1pm and slowly walked round the venue taking a good look in the margins I finally found what I was looking for as a couple of fish were spotted close in near to some marginal lilies on the end of the warm westerly wind. I quickly nipped back to the car for a few bits and pieces and within an hour or so had a couple of rods placed close in along the marginal shelf. With the rods on the deck and the clutches set slack I sat back and waited. The first bite came after just a couple of minutes unfortunately though it was a small bream of around 3lb which couldn’t resist my K-G-1 bottom bait. I slipped it back and after attaching a fresh hookbait dropped the rig back in position with a handful of chopped baits over the top and all was set once again.

Twenty minutes later and the same rod ripped off, the clutch buzzing as line left the spool fast! This was no bream that was for sure, the fish soon tired after its initial run and after a few minutes a lovely mid 20 common soon sat safe in the fold of the net. A couple of local kids had stopped to see the action and soon were helping out with the weighing and photos. At just over 24lb it was a nice start especially as I’d only been fishing for half an hour or so! 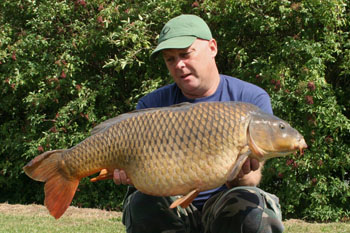 I sat down and scanned through the pictures, as I looked I suddenly realised just how many commons I had recently being catching. A couple of bream soon followed and as the youngsters seemed pleasant enough I let them take turns in hitting the bites. An hour later though when the left hand rod whizzed off again it was a different story as another carp couldn’t resist the pull of the K-G-1.

Once again this fish gave a good account of itself especially close in as it neared the net. With little weed present I simply let it tire itself out in the deeper water and a couple of minutes later one of the youngsters did an excellent job with the net.

A nice 23lb linear mirror was a welcome change and was soon having its picture taken, with the fish safely returned I decided to wrap up and head off home for an early tea. A few short hours fishing and with a couple of nice 20’s under my belt I drove home and reflected on the short time at the pool. I decided there and then a few more of these short trips would be the just what I needed at least until the kids went back to school.

When it comes to fishing ‘up close and personal’ there are a few little edges that I’d like to quickly cover as I feel that certain tactics and tackle has helped play an important role in my recent results. In fact just thinking back my last 20 fish have all been caught on baits actually placed either close in to my own margin under the rod tips or with the help of a pole and Gardner Baiting Spoon placed down the edge or to far bank margins. 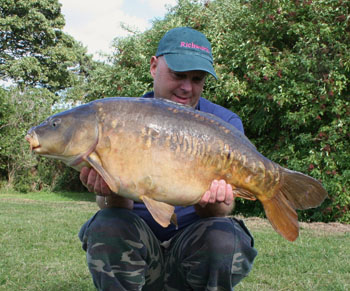 The use of a good quality fluorocarbon like the Mirage has definitely helped. This heavy, low visibility line hugs the bottom and allows you to pin everything down.   It’s taken my a while to become converted to the benefits of fluorocarbon but now use it for all my close range work – it’s my number one choice.

To aid this I’ve used back leads consistently and even to a point of using 3 on each rod! This might seem a little over the top but pinning that line down from rig right back to the rod tip is proving to be a major edge. I’ll usually combine a Pin Down flying back lead and then a small ¼ oz home made one as these light weight leads can be swung out down the line with no fear of dislodging the rig – an important point when fishing marginal slopes. Finally a small Drop Out back lead is positioned under the rod tip completing the trap.  I’ve long been a fan of back leads and as long as weed or features allow I’m convinced they give a great advantage.

When it comes to fishing close in the excitement of seeing your quarry and setting traps a little more than a few feet from the bank is the type of angling that sets your pulse racing and your heart thumping.

Give it a go, you’ll soon be addicted.