A Man on a Mission – Tim Childs

Once again our man in Staffordshire, Tim Childs, has been out on the bank and continuing his superb run of great results from the tricky Syndicate water he has been concentrating on recently.

This time he has successfully snared one of the two remaining target fish he has set his sights on, with this cracking looking 34Ib Common Carp. Having arrived at the venue for an overnight session, Tim set up at the far end of lake and started off by casting his first rig over onto the opposite bank. He then used a Gardner Baiting Spoon mounted on an extending Specimen Landing Net Handle to drop his rig precisely over the marginal weed. After that trap was set his remaining two rods were positioned on primed spots down the near edge, and Tim sat back expectantly awaiting events.

During the first night Tim’s efforts were rewarded with a 23Ib mirror caught on the far margin rod (effort = reward)… and after a quick look around he managed to locate a few active fish moving around close in at the other end of the venue. 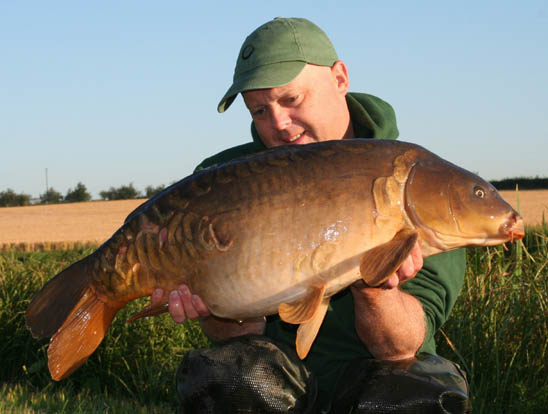 After a bit of creeping around and quietly positioning a couple of rods in the vicinity of the fish that he had located within 10 minutes one of the rods was away with a cheeky scamp of a 10Ib common!

Tim quickly and quietly reset the traps, once again placing the hook baits and baiting accurately with a handful of chopped Richworth KG-1 with the help of the spoon.

The same rod melted off just 3 hours later. After a mega 10 minute scrap in the deep margins, it was all over bar the pictures and a big cheesy grin as a magnificent 34lb common rolled over the waiting landing net cord!

With just one last remaining target fish to go for (an awesome 38lb common) things are looking good for Tim, and with 12 fish in just 13 nights fishing they seem to be well on the bait.

We are hoping that the next time we hear form Tim he will be telling us all about the capture of the big common, and with his current form there is every likelihood that this will be sooner rather than later.