A Cracking Pair! – by Pete Kingsbury

After my successful start at Horton I was dead keen to get back as soon as possible, so booked a Friday off work. After arriving late on the Thursday evening after work I found the place rammed with 17 anglers on in total! After a walk round I found out that the swim that I had started the season in was fortuitously due to become available, as the guy who had ‘booked’ to move in there had changed his mind after a swim had come free in ‘Dog Bay’, where a fish had come from earlier that day. Naturally I decided as the place was packed that I would fish the same swim as it gave me a great deal of water.

Initially I baited with 7 tins of Dynamite XL corn – as I knew there was no way the fish would be able to resist that lot!

I also decided to change my lead arrangement slightly, to a green Gardner Flat Pear Inline 3 ½ oz lead with no lead core, just the 16lb Mirage Fluorocarbon straight through. Rigs wise I decided to stick to thoroughly ‘tried and tested’ 15lb Sly Skin tied to a size 10 Covert Incizor, combined with either Enterprise pop-up and sinking corn as the hook bait.

Both rods were cast out to the area and put it was time to put the kettle on. After a nice beverage it was getting late so I got into bed ready to get up early to check the area for any signs of ‘carpy’ activity. The night passed by with no action, and I was up at 4.30am checking for signs of feeding on my spot. The morning drifted by, and it wasn’t until about 10am that I finally spotted my first sign as a fish poked its head of the water out at the back of baited area. 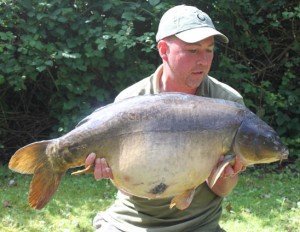 This boosted my confidence, as the spot must have looked like am alluring patch of golden goodness. All of a sudden my right hand rod was away; I picked up the rod and bent into an angry carp trying to rid itself of my rig. The fight was powerful and the fish was kiting on the line going down to my left, towards where a new member was fishing and fully expected to hear one of his rods start bleeping as the fish picked up one of his lines. With the application of some serious side strain I managed to turn it just in time and draw it away from the marginal snags as well. With the fish in front of me and on the surface, I could see it was a nice size mirror and steered her into the waiting net. After getting some help for anglers nearby the fish was weighed at 32lb, and after a few pictures she was returned safely to her home.

The rod was repositioned, and as I started to spod a further 4 tins of the Dynamite corn the left hand rod started ripping with a fast take. Talk about surprised! I had my spod rod in my right hand and I awkwardly picked up the other rod with my left. Unfortunately the hook pulled after seconds I was gutted as it felt a good fish. The loss was most likely down to not being in control after just picking the rod up with one hand.

That was the last action for that visit but I was keen as ever to get back to the lake. After a week at work and a party on Saturday night, once the misses had downed a bottle of red I popped the question of maybe getting out for an overnighter on Sunday – which was met with ‘of course you can’! With that my brain went into overdrive as I was thinking about all the possibilities of my next trip, and my alarm was set for 3am as had to load the car.

Arriving at the lake I found it busy but I knew people were off as it was Sunday, so I went for a walk and found fish in Weedy Bay, so quickly gathered up my gear and quietly positioned two rods with the aid of the Gardner Spoon and sat back to await events.

A few hours passed when I needed some water so the rods were wound in and I nipped back to the lodge. When I passed an empty Plateau swim, which someone had vacated earlier, the fish were going barmy so I put my empty water bottle in there to secure the swim then went back to weedy bay and quickly packed away and moved. Once in the Plateau I walked my rods out to a known mark on the bank and was relieved when the lead went down cleanly with a nice ‘donk’.

With both rods in position it was time to get busy with the spod, and once again a nice bed of the Dynamite corn was soon deposited over the area. I was due to be packed up by 6 in the morning to get to work, so went to bed early. Typically all that night fish were evident in the area, and at 4am I started slowly packing a few bits away. 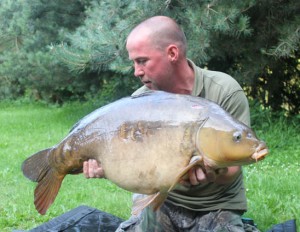 After making my second cup of tea my right hand rod was away and an angry carp was on the end with a very good fight with once being weeded up over on the right but with steady pressure the fish kept moving and got in range of netting, with that Oli turned up in the swim to assist as I had a ball of weed which was stuck in the top eye stopping me from gaining any more line, so resorted to just walking back with the fish on the surface and leading the fish into the net first time. We identified the fish as one I had not caught before called ‘Chips’ which weighed 34lb 12oz, after photos I quickly packed the rest of my kit away and headed for work a very happy chappy!