I made up a big mix for the first hit of bait, with 10 kilos of boilies and mixed particles in a large bucket and rowed out to the marker. I put a lot of the bait on the marker and scattered some boilies around the back and side of it as well. I wanted to fish two of the rods either side of the marker and the other on the outside of the baited area, hopefully to pick up the larger fish or more cautious feeders.

Once back on dry land it was time to put my theory into practice and reeled the marker in and got all of the three rods out on the spots. After doing this it was lunch which was excellent and with a few beers the afternoon soon flew by. Then it was time to round up my two boys who where staying in the bivvy with me, with them both fitting on a double lilo, with me half in and half out on my bed chair. 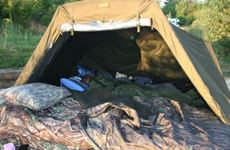 It wasn’t long after dark that I received my first take which was awesome. I picked up the rod and was met by a very fast moving fish, which flat-rodded me and forced me to give line straight away. After a 10 minute tussle the battle was won and I caught a glimpse of my prize. To my surprise it was a very long heavily scaled fish, which looked a high twenty. Having managed to net it on my own without waking the boys, and weighed it 28lbs and quickly took a picture on the mat then put it back straight away. 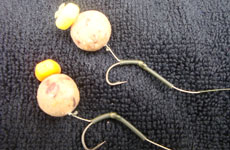 I checked the rig which was still as sharp as ever, then took the rig off, made the cast with a bare lead to find my marker, then clipped a new rig and cast it back out and got back into bed, happy to have one under my belt that night. I caught a further two carp in the twenty mark and was starting to think ‘where are the biggies now?’.

My boys woke up and were surprised to learn that I had landed three in the night when the middle rod ripped off. I was on it fast and was met again with a solid, fast moving fish. Tom helped out with the net and I managed to get the fish to turn and kite straight into the left, then turned it again and it came up straight in front of us, a lovely looking mirror into the net first time and I had my biggest fish of the trip so far at 34lb. 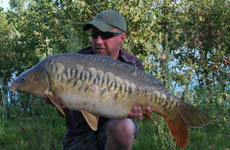 It was a nice looking fish, and this was the third fish I had caught on the 18mm boilie tipped with some yellow sweetcorn. After a couple of pics she went back, now that was four fish in under 24hrs which was great. Another good thing was a van turned up every morning with pan-au-chocolat and croissants. What could be better!

That was the end of the action for that morning so we all went to Lac D’Oreint for the day. We went swimming on one of the man made beaches. Now that’s a big lake! We had a spot of lunch and I started hinting that I needed to go back to get the bait out and rods in. Finally back at my swim I made the mix up same as before, really giving it to them boilie wise. It made me laugh when I saw the 26mm boilies going in as it was so different to what I usually use (carved down baits or chops and 10mms). Once the bait was in and I was back on dry land, I cast all three rods out.

That night I prepared a great big BBQ, enough to feed a small army. It was great to be with the family looking out as the sun set over the lake with the occasional carp jumping. Then it came time to retire, the two boys where already asleep as I got into bed when a massive fish jumped out around the area I had baited, so I got back out and made a cup of tea and watched the water for an hour, but with no more shows I retired once more. 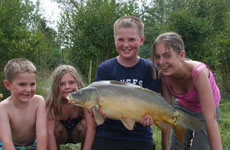 I was up at first light and couldn’t believe that I not had action, and walked the 60 yards to Josey’s swim and woke him up. He’d not had action but the fish were very evident in the bay to his right so he repositioned his rods and once that was done we had a cup of tea. Then my receiver started to bleep and I was away so ran and picked up the rod and was once again connected to a fast moving fish. It was 6am and my boys were asleep.  Having managed to gain control of the fish Tom appeared by my side, so as it was daylight I gave the rod to him to have a go. He did really well and together we managed to get the fish ready for netting. It looked a low twenty and Tom guided her into the net first time, so we woke up his mum to have a look, then took a nice picture and put her back.

At this point I thought it would be prudent not to recast because there were fish present on my spot big time, so elected to leave the two remaining rods out there undisturbed. Then after what seemed like ages, with the hot rod still out of the water, one of my remaining rods ripped off, it was the double 18mm Tiger nut boilie. After feeling the weight of the fish it seemed to me that I had finally got a bigger one. I had Tom on the net and the fish decided to use its weight and just kite right towards Josey’s swim, I applied pressure to turn the fish and all held and the fish finally turned, and I pumped the fish into my margin.

Then we got a glimpse of the fish in the clear water and my legs went to jelly. On the end was a common, definitely my biggest so far, so I carefully steered her into the waiting net. Tom did a great job and I let out a big shout to get the others from around the lake to come and assist with the photos and weighing. With everyone round I gently lifted the fish onto the mat. We weighed her at 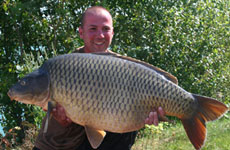 44lb 8oz, had some awesome photos and put her back. Well happy! It was party time, we were due to go to the supermarket to get some bits but the bits turned into BBQ food so we could have everyone round for a big meat feast. It had been very hot most days, in the high 30’s and on Wednesday it hit 40oC, so bringing the rods in at about 11 in the morning was not an issue as not much was happening due to the intense heat.

After getting back from the supermarket I got organised, got the marker back out and boated the same amount of bait out and finally positioned all three rods out again. The only change I made was to change the colour of the fake corn from green to orange. So once all three where cast out I decided to light up the BBQ, everyone turned up and we had a great time with good food and beers. Then it was time to retire to our swims and go to sleep.  Once both my boys were asleep I got into bed, it felt like I’d only been in there for a short while when I had a take on the rod I had put the orange corn on. I hit it and it felt good, taking line straight away. I slowly gained line and in my torch light I managed to net a low twenty, I unhooked it and weighed it at 23lb. Happy it was a pretty mirror I put her back and repositioned the rod and got back into bed. Shortly afterwards the rod with the 18mm and yellow corn combination was away. This fish was only on for about 10 seconds when the hook link was cut by something sharp down on the lakebed. This had never happened before so I changed up to a 25lb hook link and repositioned the rod…

It was only out there for 20 minutes when it was away again. I played this one a bit more carefully as I had just lost one, it was plain sailing and it wasn’t long before I netted a nice mirror and left it in the net as it was a bit bigger then I had a first thought. I woke Tom and Joe up and they helped with the weighing. We were all surprised when it went to 47lb!… (End of part 2)