For some reason I had never really wanted to fish in France! Misguidedly I thought it would be a waste of time, easy fishing and big horrible ugly fish. In hind sight I must admit I was wrong.

My angling friends have been travelling to France every year for as long as I can remember, fishing Rainbow and others, and it wasn’t until a couple of years ago, when we met up for a BBQ, that I finally arranged to go with them on their next trip. The chosen venue was a lake called ‘Blue Water’. It looked ok, and could cater for the four caravans going on the trip – including our hired motor home, which my wife and daughter were to stay in. My two boys would sleep with me on the bank side, and although France had never interested me, with all the family coming I was now really looking forward to it.

A couple of months before we were due to go, the venue fell through as it had been double booked and we got a refund and tried to source another venue. Luckily we managed to get on Gigantica, which looked to be a good bet. 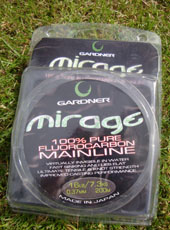 Once that scary bit of planning was sorted all that was left to sort out was the tackle and bait for the trip. Tackle wise I was going to use the same rods that I use in England, Free Spirit Hi’s 31/2LB TC which were up for the job, coupled with Daiwa Tournament reels loaded with Gardner’s Mirage in 16lb because of its abrasion resistance and sinking characteristic which I believe is a massive edge. 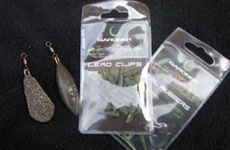 Along with the range of new Gardner leads and Covert clips the end tackle I was successfully using at Horton was Sly Skin green in 15lb with the Incisors size 10, so I was always going to take theses, but also got a spool of the 25lb version and some Covert Mugga hook’s in sizes 8 and 10 which I thought would be better suited to some French hauling.

I wanted to use bait that I was 100% confident in so it had to be Dynamite’s Tiger Nut boilies. I ordered 50 Kilos in total, ranging in sizes including 10mm, 15mm, 18mm, 22mm and 26mm size boilies. I also took the ever trusty mixed particles and the new ‘Sweet Corn XL’. 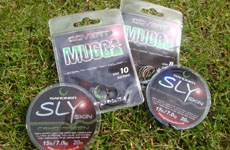 We all met at Dover at 8:30am on the Friday before, we were due to get to the lake midday on the Saturday. The ferry crossing was no problem, a bit of duty free wine, beer and bits for my children. In no time at all we were in Calais. We had pre-booked a campsite half way down to ‘Gigantica’, and once there we set up and got a cold one and some food. We had a reasonably early night but with the excitement setting in I didn’t get much sleep!

With anticipation building we all got up and loaded the equipment back into the camper and we were off on a three hour drive with a stop. We arrived at about 12:30 midday and I don’t think the guys at the venue knew what had hit them, with four large caravans and a motor home, our wives, children and dogs, but they made us very welcome and over a beer we were shown the map of the lake and positions of the caravans and relevant swims. 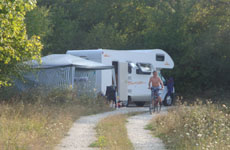 I was quite fortunate to get a swim called Alcatraz. Admittedly my motor home was 100 yards away, parked in a lay-by with no power for the misses’ hair!! Talking of which, on the day of picking up the motor home, my wife managed to blow all the fuses, completely melt my power pack and then went and brought a converter and melted that as well, all with her hair dryer! Happy Days!

Back to the fishing, why I was lucky to get Alcatraz was because the week prior to me getting into Alcatraz, Jake the carper was fishing in this swim and he had also using Tiger Nut boilies and had caught a P.B so I was buzzing.

After all of the casting in our relevant swims we started the vast task of setting up ‘Camp Kingsbury’. I had to fill the wagon with water which meant walking 300 yards to a tap, filling up my water container, then back and lifting it above my head to fill up the motor home. I had to do this 6 times! Then came the table, chairs and Gazebo. Talk about being cream crackered by the end, I was so tired I didn’t fish the first night. I slept soundly under the stars in my swim and watched the water. During the night I heard a few fish crash out, and my mate Jezzy caught a 35lb mirror.

Straight out in front about 60yrds there were fish evident and whilst I had my marker in hand Jake walked into my swim – he was staying on site using it as a base before going to Madine for the World Carp classic – and said that it was the area he had fished and pointed out the tree tops on the opposite bank that he had been using for markers, so rod positions sorted I was well happy.

As I said earlier I was using Mirage mainline which is an excellent Fluorocarbon, easy to cast, fast sinking and virtually invisible in water, what more could you want? This was then combined with Green Covert Lead Clips and with 3 ounce Gardner gravel finish distance bombs. All three rods where set up like this because I planned to fish all three in the same area. 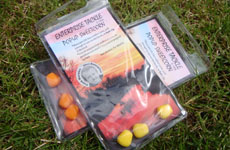 The rigs themselves were each going to be slightly different. I was going to be using the same hook link, Sly Skin 15lb green and a size 10 Mugga, but I was going to use different hook baits on each to see which would produce the most action. The hook baits I started with were an 18mm Tiger Nut boilies boilie tipped with Enterprise yellow corn, a double 18mm Tiger Nut boilies and the third rod was a 20mm’er tipped with green Enterprise fake corn. 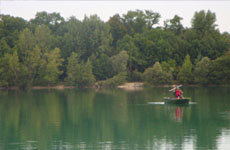 I had hired a boat so I could row out to the marker and bait up, I had never done this before. The marker was still in position and all three rods had been cast and marked with tape so it would be easy to position at any time both day and night… (End of part 1)