Just thought I’d update you on my recent escapades at my Surrey syndicate lake.

The weed has really got hold of the place, much like last summer, with very few clear spots available. The fish have been slow waking up as bites have been a bit on the shy side so far but, I had the chance to get out over the spring bank holiday weekend.

I had two nights ahead of me and after being tipped off about a few fish showing in front of a swim referred to as the Plateau decided to plot up here as it hadn’t been fished for a while, and it was a swim I knew quite well having seen a few in front of it during the winter months. However, the wind was a north easterly and the spots just didn’t feel right so. Unable to tolerate it anymore I moved to the other side to a swim I knew had previous spring form.
I carefully baited a sandy area in amongst the weed approximately 30 yards out with a healthy supply of a new bait from John Elmer’s Scattered Baits stable, and positioned a double bottom bait on a size 8 Covert Mugga hook fished blowback style, using 15lb Sly hook link, and the new Covert Lead Clip and a six foot length of 25lb Plummet lead core five yards away on a much smaller hole in the weed.

One thing that I had noticed from last year was some of the larger residents were happy watching the smaller fish come onto the baited areas, which is common on a lot of waters but, more so on my syndicate. The big girls seldom come out so, it was an approach I wanted to deploy more often. I hadn’t seen anything all day and, to be honest, was not at all happy how the session was unfolding but proceeded to just enjoy the time off and decided to think about what I would do different next time around.

For some reason nature had prevented me from sleeping properly with foxes, birds and rodents shuffling about all damn night but I was thankful for a good fish crashing out at 3am to the right of me that made me sit up and watch the water for a little while.

That was all that showed so I had only just decided to retire to bed when the rod that was on the small spot had been picked up but I’d forgot to turn the alarm on and luckily heard the distant noise of a clutch spinning! After an intense 15 minute battle I landed a mirror known as the Little Grey at 43.06 – a new PB! 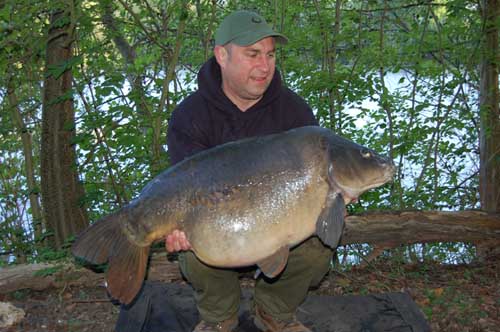 The terminal tackle took a right pasting but with 20lb HydroTuff and the ultra reliable Mugga wedged two inches back in its mouth I knew she had no chance!! A fantastic fish from a fantastic water that holds bigger jewels than this one – so I’m hoping my approach may work again next time out!