A Magical Week in France by Phil Kingsbury

Having booked a week off work to go fishing in France with four friends, the first week in April saw our group travelling overnight on the Saturday night ferry from Portsmouth to the port of La Harve. Then a 2½-hour drive to Normandy to our destination.

We arrived about 10.15am on Sunday morning, and even the weather was in our favour and the week’s forecast was for warm and sunny weather – great! After a cup of tea in the lodge and a chance to meet the bailiff and his wife (who was cooking for us for the week) we had a walk around the lake. The lake was a 200-year-old estate lake which was very silty and shallow, with depths ranging from just 3 – 7 feet. It had mature trees all around the lake and it looked quite snagy.

We then had a draw for swims, in which I came out second and picked swim number 8. It had hardly any features other than the far margin that had plenty of overhanging trees with only a few small gaps in between. I was advised by the bailiff to cast into these gaps, which was about a cast of 100 yards. I barrowed my gear round to the swim, we did not have to worry about bivvys and bed chairs as they were already set up in the swims, which was a bonus.

By this time it was midday and the sun was beaming down. I got my three rods set up using Gardener Mirage Fluorocarbon mainline 16lb, (leaders of any kind were banned on the lake) so I used Gardener Covert sinking rig tubing. The lead arrangement was the Covert Safety Clip, Gardner 3oz Swivel Distance Lead. Hook link was either 15Ib Disruption in Camo-Green or Mirage mainline as a hook link with size 6 Incizor hook with a short piece of Covert Camo shrink tubing (small).

The chosen bait I chose to tempt the fish was was Dynamite Monster Tiger Nut boilies in 10, 15 and 18 mm. Using these as hook baits and Dynamite Betaine Green pellets in 6/8 mm and Dynamite Frenzied Chilli Hemp and the normal Frenzied Hemp.

Before I went round the lake to check out where I was going to cast my baits I mixed a jar of both the hemps and added half a bag of the pellets; this would allow the pellet to soak up the hemp juices. While this was soaking I had a cup of tea and tied a few rigs. After that I walked around the lake to the far tree line.

When I got there the sun was shining underneath the trees but I could not see anything! No fish at all, but there was an 4 foot long adder sunbathing on a rock about which startled me a bit but it did not stop me from baiting up the 3 spots I planned to fish. I baited heavily with pellet and hemp also throwing about 30 boilies of all the different sizes around the area as well. All done I went back to my swim via the lodge to pick up a bottle of red wine. I knew my mate in the next swim liked red wine the same as me.

I cast the rods out with just the leads on to get the distance once this was achieved I tied power gum knot on the line as a marker to enable me to clip up all week. After one or two casts the baits went bang on the spots.

The first night the buzzer went on the left hand rod, I jumped out of bed only to find it was a small cat fish, after re-casting I went back to sleep. No more action until the morning about 8.30am when the middle rod pulled up tight and the line started going out after pulling into the fish I found it had snagged. The snag was twenty yards off the far margin and being that I was using the heavy Mirage Fluorocarbon mainline the line was laying flat along the bottom and so I lost the fish – gutted.

After tying a new hook link and casting out to the same place. Later that day I had another take on the same rod and the same thing happened, so I raised the front rod rests up as high as I could get away with and lowered the back rests. I set the the clutches tight with the bobbins up to the top of the rod with no slack line at all, this I thought would keep as much line as possible out of the water. I also loosened my safety clips; this would allow the fish on the first shake of its head the lead would come off. This helps bring the fish to the surface – brilliant! Unfortunately I had no fish that night to test I was right….

On Wednesday morning about 11am I had 2 beeps on the middle rod; I jumped up to see the rod tip shaking so I grabbed the rod and pulled into a fish. After a spirited fight I slipped the net under a lovely common, which weighed 36lb 8oz. 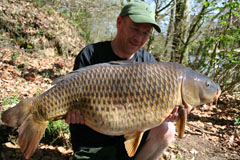 – great! Photos done I slipped her back, then a few hours later my right hand rod give a few beeps, then dropped back a few inches so I pulled into it but it was another cat of about 10lb. I also had a fine looking 2lb 8oz roach on a 15mm Tiger nut boilie.

After reeling in all my rods I went for a walk around the lake to bait up my spots with a few handfuls of hemp and pellet again, and wander round to see how my friends were doing.

Back in my swim after a few hours socialising I got all three rods back on the spots and settled down for the night. I had no action in the night but in the morning at about 8am I had a take on my middle rod again, which turned out to be a beautiful 40½lb mirror 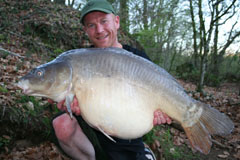 . After loosing the first two fish, which was due to the snags, I was really starting to enjoy my holiday.

After a few hours of leaving the remaining two rods out (I didn’t re-cast the third rod because I found that it would spook the fish being it was the first week of the season) I brought them in and went for a nice shower.

After returning to the swim refreshed and ready to go I got more hemp and pellet and I went round to top up the spots again. Three rods back out but nothing until the middle of the night, I had three beeps on the right hand rod – jumped out of my sleeping bad, head torch on which I shone on the rod tip which was bending round so I grabbed the rod and pulled into a fish. When I got the fish into the net and saw that it was a nice mirror I went to wake up my wine-drinking friend in the next swim. He helped me with the weighing and the photos. After slipping her back I couldn’t re-cast because at the time as there was no moon and it was pitch black so elected to put the rod back on the buzzer and went back to bed with no more action occurring that night.

At first light I put a new rig on that rod, re-baited and cast out – spot on. Then at 6.30am I had four beeps on the middle rod and pulled into a fish that felt very different to the others – very heavy. After playing it for a while I managed to slip the net under a mirror, which was bigger than anything I had seen before. I secured the landing net with a rod rest in the edge then went to get my friend in the next swim. After he saw the fish he said he would go along and get the bailiff, by this time another two friends had come to see what the excitement was about. They helped me weigh the fish, which weighed 57lb 8oz. 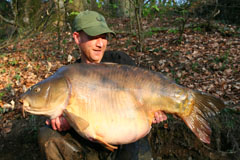 I was over the moon – what a fish – the biggest fish I had ever seen on the bank. With the photos done I had to give the fish a kiss and then put her back.

During the day I caught another 2 small catfish, but I didn’t mind any more because I was on cloud nine. It was the last night of my holiday and I was very happy with the whole week and with the fish that I had caught.Once more I made a bucket of hemp and pellet and added a few assorted Dynamite Tiger nut boilies and went round to bait up. About midnight three bleeps on the left hand rod alerted me that another fish had made a mistake, jumped out the bag and pulled into a fish which turned out to be another small catfish. As before it was too dark to re-cast as I could not see the small gap on the other side of the bank, which I had to cast into. The rod was put back on the rod rest and I got back into bed.

Just before first light I had a couple of beeps, this time on the right hand rod, so I jumped out my bag and shone the head torch on the bobbin it was motionless then I walked to the end of the swim to check on the rod tip it was bent double. Just as I was about to grab the rod it shot off the rod rest and the reel whacked against the buzzer. I grabbed the rod and leaned into a real heavy fish. At first I thought the fish was snagged but then it started to move. It didn’t want to come in and after 15 minutes I managed to slip the net under the biggest common carp I have ever seen!

By now it was light, the sun was just coming up, I let out a massive yell and my friends came round to see what I had caught and to help me. When all of a sudden the middle rod beeped twice and I notice the rod tip shaking so I pulled into another fish and asked one of my friends if he could go and get his landing net as I already had a fish in mine.

We got the fish in the net without too much trouble and I could see it was a lovely mirror, after securing it in the landing net we concentrated on weighing and photographing the big common. Up on the scales she weighed 59lb 14oz 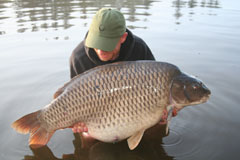 – what a fish I couldn’t believe it. With the photos done including some good water shots I slipped her back into the lake. I then proceeded to weigh the mirror, which was 40lb 8oz.

I couldn’t believe the week I’d had – I was ecstatic! It’s a trip I shall never forget
Good Holiday, Good Friends, Good Food – MAGIC!!