The first bit of fishing I did this month was the Thames Valley Carp Masters. This is a pair’s match held on Brasenose 2 on the Linear complex, and with some top names competing, me and my partner for the match Jason would certainly have some good competition.

We had aimed to arrive the night before, and bivvy up on-site ready to get to the draw on time, and also see if we could find where the fish were. It didn’t work out like that, and we ended up having to sleep under the stars outside the linear gates! After a poor night’s sleep, we piled all the gear into my car and drove round to HQ ready for the draw. It was going to be an out of the bag draw, and Jason and I ended up being the last people drawn from the hat. We still had a middle of the road peg and what is considered the best swim on the lake left, we drew the middle of the road one of course! 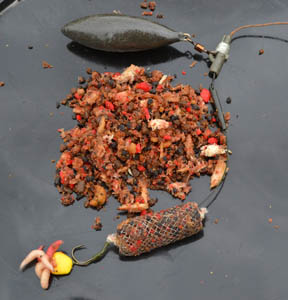 We quickly got round to the swim and got everything set up, waiting for the hooter to start spodding and marking. We located a gravelly area at just over 120 yards, and all the rods were clipped up to this. We started spodding little and often over zig rigs, tied up with 10lb Zig Link and the awesome size 12 Covert Mugga’s. After a few hours, and with still no action, we each decided to swap over to a maggot rig fished on the bottom with a small PVA bag of pellet. This change quickly brought about bites, and by the first evening we were in second on 44lb, close behind first. 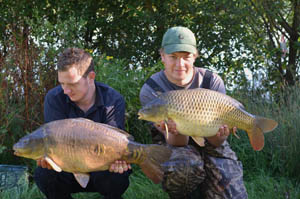 A few fish graced our nets during the night, but as dawn broke the action became hectic! It was a struggle to keep all 4 rods fishing all the time, but we were building up a good weight, especially when we had 3 upper doubles to be weighed at once! We were the first pair to push over the 100lb barrier and started to put some space between us and 2nd place. However, as the sun got out, the fish moved up the water, and the action on the bottom dried up. We therefore switched all the rods back over to the zigs, and through the day managed to pick off a few more fish, but we were struggling and anxiously waiting for a scoreboard update. The scoreboard was updated early afternoon, and we were shocked to find that we were holding onto first place, as pairs all around the lake were really struggling. As evening drew in and the temperatures began to drop, a few more fish graced our nets, but a pair in the shallows had started to catch, and we were pushed into second! We now had to anxiously wait for the morning when we knew we would be in with a chance of building up a weight again.

We had a couple of fish during the night, and in the morning it got hectic again! Jason landed a 27lb’er which we thought would certainly help us catch the 1st placed pair! We also added a few more mid to upper doubles, and unfortunately I lost 2 right at the net. In the end it wasn’t quite enough and we ended up in 2nd on 227lb 3oz, first were 291lb- well done to them! It was a really well run match, and I look forward to taking part again next year! 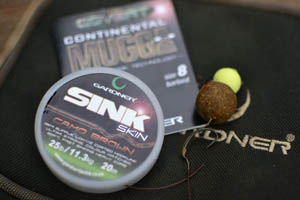 The next session of the month was to be 4 nights on the syndicate lake. The fish had moved from the shallow bays, into the large expanse of open water, and this was where I wanted to be. Unfortunately, the lake was quite busy and I couldn’t get in an area I felt confident. I therefore decided to set up in peg 39, fishing towards the large, deep out of bounds area, hoping to move when a swim became free. After 2 nights, swim 26 became free- this was the swim I caught my first 2 fish of the season out of, and my favourite swim on the lake. I clipped up at the spot I had caught from, and after a few casts with a bare lead found that it was nice and clear at the front of a weedbed- perfect! 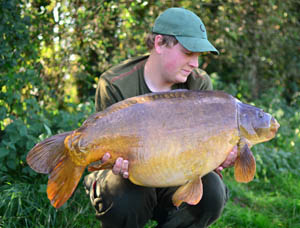 No more action happened that session, but I was back the next week and managed to secure the same swim which was a touch! The rods went out the same, and I kept the bait going in hoping that the fish would switch on, and start feeding up for the winter. It didn’t work out that way and the only action was a bream like take on the last night. Only when I was trying to bring into the margins to unhook it did it remember it was a carp, and after a good scrap I netted my first common from the lake at 20lb 6oz.

That was the end of the fish for this month. I am now back to college at Sparsholt, but will hopefully be doing a few nights during the autumn period on the syndicate lake. I also have the final of the UK Carp Cup to look forward to, hopefully I can get a result!