Until I joined Gardner at the beginning of 2012, carp fishing, although a huge passion of mine was something I kept rather private. However, after 9 months on the team, my lack of blog contributions has not gone unnoticed, so I figure it is finally time to bridge the gap between my fishing and my job.

I arrived at the syndicate at 7am and could see the padlock shining on the outside of the gate. Now this may seem like a trivial thing to notice, but clearly, if a padlock is on the outside of a gate, then there is no one inside. I swung the gate open and confirmed my hopes. I had the lake to myself.

Being the only angler on the lake on this particular morning I was granted my 1st choice of swim. There is an old jetty at the mouth of the channel where I have been trickling in bait for a few weeks. The overhanging trees on the far bank create shade meaning the weed is less prolific and I still have access to the open water on my left. 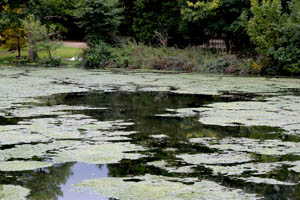 I decided only to use 2 rods on this particular morning. I wanted to keep disturbance and lines to an absolute minimum.

My left rod was cast to a clearance in the surface weed at around 60 yards, a spot I knew to be clear of weed below the surface due to the particles I had been trickling in over the past weeks. Although a silty lake by nature this spot had been polished so thoroughly that I was able to deploy a simple bottom bait without any concerns with regards to presentation in the silt. The rig of choice used around 6 inches of 15lb Disruption in camo brown coupled with an ever-faithful size 8 Covert Mugga.

My right rod was cast to the far margin towards the overhanging trees. When fishing this particular margin I opt to use a chod rig. The bottom is messy and the chod gives me the presentation I am looking for. It also gives me the trajectory I need to get under the overhanging trees. A Small length of 15lb Tripwire and a size 6 Covert Chod hook anchored to the deck with 4ft of plummet leadcore are just the ticket. 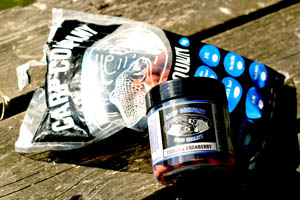 Bait wise, I was using a 16mm Carp Company Icelandic Red on my left rod, fished with a few Slinga pouches of freebies over the spot. 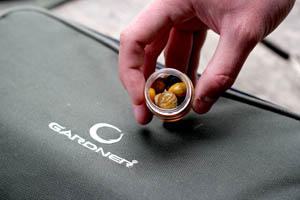 My right rod Chody was baited with an Enterprise fake tiger nut and fished over a small bed of particles. I have found the tiger nuts to be absolutely brilliant, they are super buoyant, super smelly and resist the temptations of the crayfish that I know lurk under the tree line. Both the above mentioned baits are relatively new to me but I have quickly gained absolute confidence in both of them. They both now have a permanent place in my armory. If you have never tried a fake tiger on a chody, I cannot recommend it enough!

The rods lay motionless until around 11am when suddenly the left hand rod tore off. After an interesting battle, which was basically a tour of every weedbed between the spot and the bank, I was relieved to slip the net under a mid double common. Although not the biggest fish in the lake, he was absolutely immaculate, a miniature version of some of the larger commons I know call the lake home. 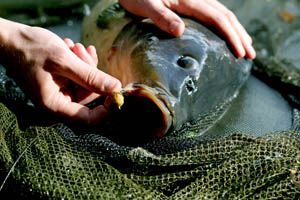 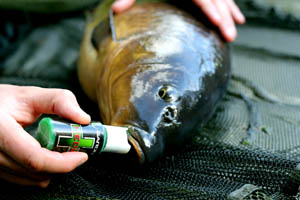 As I returned the fish I could still see fizzing over the spot that the run had come from. I quickly rebaited the rod and returned it to the spot through the now disturbed opening in the surface weed. I had a really good feeling and was confident that if another bite was to come, it would be on the left rod. I was wrong…

At around 1pm I began to notice some movement under the trees on the far bank. I had wandered round and thrown out a few scoops of particles earlier in the morning and it certainly looked like the fish had located them. After about 30 minutes of fizzing and dorsal fin theatre I was thoroughly satisfied when the right rod pulled tight.

I could instantly feel this one was a “better fish”. The fight was slower and the fish stayed much deeper. The fish granted me a brief view of it as it surfaced about 4 rod lengths from the bank. It was a much larger common than the 1st fish and I continued the fight much more tentatively knowing this. Eventually I slid the net under the fish. It was a very dark fish with a massive set of shoulders.

The common weighed in at 24lb 12oz, it was a stunner. Not one of the 30lb commons I have been after but I was still ecstatic. 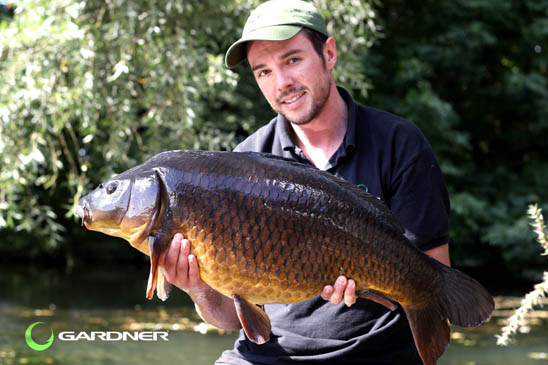 I had decided I was going to write this piece a few days before and I had really been hoping for a couple of fish (it would have made boring reading otherwise). With the blog entry in mind I had also taken the good camera so I was able to get some good photos of the day too. The photos are certainly better than a lot of my mobile phone photos of late.

After a few photos (thanks Chloe), I slipped the fish back home, thrilled that I had a good fish for my 1st blog entry.

I only stayed at the lake for another few hours, the rods remained quiet and all signs of fish had ceased. It would seem the 2nd fish really had killed the swim, it’s a fairly shallow lake and the fish do not react well to noise and disturbance.

I decided to pack up at around 4. I put lots more particles out before setting off home. I wanted to keep the spots primed for next weekend when I will certainly head back!

Well that wraps up this edition of my 9 monthly blog ;)… Who knows, Next time I might even venture to another water (Lewis).