My latest trip to the ‘Little Carp Park’ coincided with the lake having quite a high level of algae which made it almost impossible to see anything even in the margins. did spy a large common in the margins and set up as close to it as I dared and after putting a bit of grub and a rig on the chosen spot I was quietly confident that I might get a pick up. Alas, the morning came and went and with nothing to show for my efforts. A quick nosey at my rig before I reeled in revealed that I had ‘been done’ as all the freebees were gone except for the hook bait! The main thing to come out of the lesson was that they loved the bait and that I needed to put a little bit more thought into rig concealment.

It’s certainly been a busy month for me, what with trying to fit in a tutorial for a youngster who is as keen as mustard and my own fishing which this month also includes a fishing a charity match on a local water (plus I wanted to sneak in a practice session on that particular water).

Anyway, I took the young lad fishing for a day session on a water local that was to him. He’s only 7 years old but it’s good to catch them early as they will hopefully be hooked for life. The tutorial day wasn’t all about catching carp either, for the young lad it was more about seeing fish on the bank and he wasn’t disappointed either. We went on to catch quite a few bream as well as a tidy sized crucian carp. 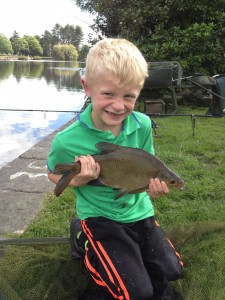 Throughout the day I was being bombarded with questions and I was quite happy to feed him all the information that he needed to hold him in good stead in the future. On top of that, the smile on his face when he was catching was more than enough to tell me he enjoyed his time on the bank and no doubt I will have the odd call from the newest member of our fishing fraternity. I gather from speaking to his mum he is still as keen and has done the odd session, so an angler has been born and long may it continue. 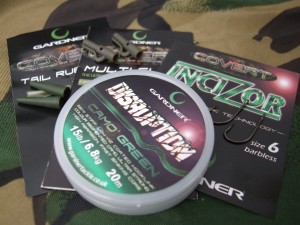 So the following week I was on the banks of the venue I was going to fish the charity match for a quick over-nighter and the weather looked spot on for a bite or two. I knew after a bit of a lead around that there was no weed to speak about so I put a wafter on each rod and used my tried and tested end tackle of Covert Incizor hooks and Disruption hook length material. I am a great fan of braided mainline and the Gardner Hydro-Sink braid sinks like a stone and seeing that I was going to be fishing the margins I wanted everything in my favour.

Anyway the plan fell together nicely and I caught a couple of upper double commons. It appeared that the trick was to scatter boilies over the top of the rigs every hour or so as I knew there was fish mooching in the swim on a regular basis. 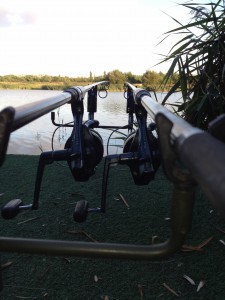 Next month I will be able to tell you how I got on in the match – and to make it a bit more interesting it was a Wales vs England match!

So bring it on and watch this space to see which team won.