My fishing this month has been mostly quick overnighters due to working at For Life Experiences during the week, and coaching for my local club on Saturdays. 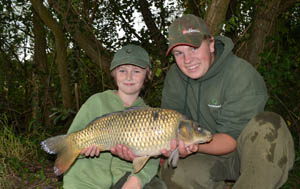 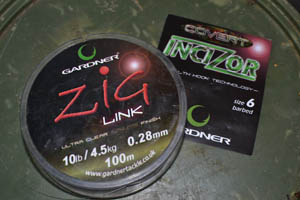 I did manage to bag another fish from my syndicate, and a bit of a special one at that! I had done the night at the other end of the lake, having seen a lot of fish showing in the open water, but hadn’t had any action. One of the other members had a fish in the net, so I reeled in to go and do some pictures for him. On my way round I had a quick look in the Big Bay, and there were fish everywhere, a move was definitely in order! I did the pictures, packed up quickly, and was round there with the gear. I put out a few floaters and over the next hour or so a few fish were taking, including one of my target fish “The Big Linear” which would have been over 40, along with a bigger fish that I couldn’t identify! 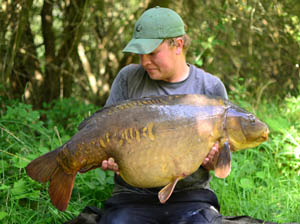 Eventually I decided the fish were looking confident enough to have a cast, and I flicked out a rod. I had tackled up with a size 6 Covert Incizor and 8lb Zig Link, this was fished with 12lb Pro Carp straight through to a small controller float. The cast went out past the area the fish were feeding, but it managed to pick up a bit of weed so I had to reel it in, and on the recast I got a wind-knot (classic floater fishing nightmare for me!). I decided to sort the wind-knot out by flicking the bait out down the margin, rather than spook the fish. The wind-knot was quickly sorted, and I looked back up at the bait, to see a big set of rubbery lips slurping my bait down! I struck and the fish tail walked off into the weed, and an epic battle started. The fish ran me ragged on the light tackle, but eventually I managed to slip the net under it after wading out past the thick marginal weed. In the net I recognised it as a fish that was thought to go 40lb, and seeing as my previous floater caught personal best was 19lb 15oz and I had been targeting a 20, I was buzzing! I quickly sorted out the mat, sling and scales while a mate came round to photo it for me. On lifting it out of the water, it did look 40, but was a bit spawned out and the scales swung round to 37lb 14oz, a massive new surface PB and I was made up!

I set the rod back up, and fired out a few more mixers, but the fight had spooked the majority of fish in the bay. I therefore decided to pack up and go home, keen to come back and give it another go soon! 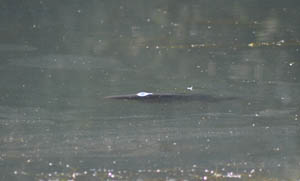 I did manage a few more floater fishing sessions in the bay, but a lot of the time the fish were more interested in sun bathing than feeding, leading to a lot of frustrating refusals right at the hookbait as the fish sensed something wrong. It was good to be able to watch the fish and their habits, and it should hopefully help when it comes to fishing come the autumn!

Next month I will be concentrating on my syndicate before heading back to Sparsholt at the end of the month. I will also be fishing the Thames Valley Carp Masters on Brasenose-2. This is a pair’s match, and I will be fishing with my good mate Jason Townsend!