The Rubble Lake – by Jan Ramp

It was in the late eighty’s as I sat at my local tackle shop, where the owner drowned us with filthy old coffee, when I first heard of carp that have the most beautiful colours and stature of all species.  An old man named Gerrit, (pronounced with a hard Dutch G) known for his swearing sat on a wooden barstool in the corner of the small and dusty tackle shop rolling a cigarette when he mentioned these carp. Once he got the attention of the local “coffee drinkers” he looked at the crowd and asked us if are interested in his story.  He licked the cigarette he just rolled, lit it and blew a huge cloud of blue smoke towards his audience.  To be honest I was a bit disappointed when he started his story with the fact that he had never caught one but that he knows a lake hidden between huge piles of building rubble where these magical carp live. The story got even worse when he mentioned that the lake was full of sharp and snaggy debris that were dumped there by the builders.  According to Gerrit he gathered this information from one of the workers who had seen them while working on the site.  At the time I thought Gerrit made it all up and I didn’t pay any further attention to it.

In 1997 the same lake crossed my path again – this time from a reliable source.  A friend of mine, named Marcel moved from the hectic centre of Amsterdam to small town in the green heart of Holland. Marcel had a management job at a large transport company which limited his fishing time dramatically.  Therefore he started looking for local venues to maximize his bank time. He stumbled upon this lake accidentally as he took the wrong exit driving back to his new house. Instead of going home he decided to park his car and walk around the lake. It was a sunny day and it didn’t take long before he spotted a large group of carp traveling slowly in the margins. At first Marcel decided to keep his discovery to him self, but after a few weeks the council placed a large fence around the entire lake and forbade everybody on the site. That when he called me with his story. Now that I had the location I got in my car on a rainy Sunday morning to finally visit this mystic venue.  Even though the lake sits right beside the motorway it took me a good hour finding it. I ignored the danger signs, climbed over the fence and landed up to my waist in quicksand. I thought it would be the last of me and promised god never to ignore a danger sign again. I managed to worm myself out leaving my boots buried ½ meter deep in the smelly dangerous blob. I kept my promise and never went back again!

Well, ‘never’ is not entirely true… In the beginning of June 2012 I got invited to fish the lake by total coincidence. What once was a hidden lake has now turned into a recreation park with playgrounds and swimming pools. While talking to the local anglers that invited me I learned that there has been a huge fish kill and only a handful of the old beautiful carp has survived. With the plan to bring the lake back to its glory days a small group of anglers put their heads together and started re-stocking the lake in 2004.  Not exactly sure of the current stock it’s now time to catch and register.

The first three weeks I spend walking around the lake looking for possible swims. Most anglers fished on the south bank as it was clear of snags and easy to access. I didn’t want to mix in with the crowd so I concentrated on the north bank.  With some help of one of the locals named Rene and my marker rod I picked the most awkward swim of the lake to start my adventure. I picked it for numerous reasons. First, the wind direction. Summer is coming and we will get a lot of south west wind. Another reason is pressure. As far as I know this area has never been fished before.The down side of this end of the lake is that it’s full of snags. The remains of the building site were dumped here to form a dike. The only clear spots I found were right under the rod tip. I thought this might work so I pre baited 500 grams of Tiger Baits Polar 20 mm boilies four nights before it’s finally time to fish the lake that I’ve known about for more than twenty years but never fished before.

It’s Friday the 29th of June and I’m ready for my first overnighter on Rubble Lake. I managed to get the day of work so I drove up the car park at 2 PM. I loaded my barrow and started the 15 minute journey to my swim. Two young girls walking their dogs gave me a funny look and laughed when I passed them covered in sweat and making kind of rude groaning sounds. I stopped twice before I reached my swim and drunk almost half of my provision of water. Not 15 but 25 minutes later I finally arrived on the awkward swim how I named it. First thing I did was drop some boilies behind the reeds, one by one trying to create a trail leading to my hookbait. 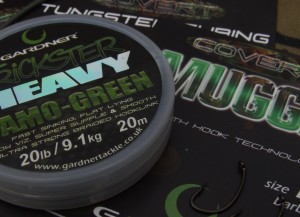 I tied two rigs using Gardner Trickster and Mugga hooks, baited them up with a 20 mm Tiger Baits Polar boilie and dropped them in the close margins, just under my rod tips. Before letting go of the line I bounced the lead a few times on the hard bottom. Just to make sure the rigs are not snagged. I pulled of some line so that my lines are hanging slack. Once I had the rods correctly set up I had time for the brolly and bedchair. I got out my waders and laid them down in front of the brolly. Still busy setting up my camp for the night my left alarm screamed of. Shocked by the early take I forgot about the waders and grabbed the rod. I expected the fish to bold to the left behind the reeds, and that’s exactly what she did forcing me to get in the water and pull her away from the snags. Up to the middle in the water with my rod bent to the handle my clutch hasn’t stopped ticking away yet. As I stood there it hit me that I left my net on the bank. While I was trying to think of what to do the fish changed her direction and cruised of to the deeper water. This was my chance. I gave line and pointed the rod up as much as I could and walked back towards the bank and grabbed the net. Then I started reeling in, and a couple of minutes later she was in the net. Totally agitated I opened the net to undo the line by unclipping the speed link. And there she lay, perfectly shaped just how I expected her to look like. 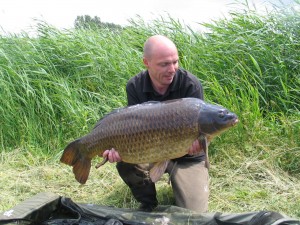 My first Heidemij carp1! Characteristic with her small head and beautiful stature. I realized I’ve caught one of the oldest carp still alive. It was the great common. I rolled up my net and lifted her to the unhooking mat where I had prepared my weighing sling and old but accurate scales which I’ve already set to -2 kg. I gently poured a bucket of water over her. Then I attached the handle to the scales and gently lifted my prize. Still full of adrenalin the scales shook like an old fashioned alarm clock and it was impossible to correctly weigh her witch was the whole purpose of me fishing there. I decided to hang the weigh sling back in the water (I have one of those new fancy ones that floats) and wait till I’m back to my senses.  After a drink and a quick ping message to Rene I declared myself cured from the shakes and weight her again. This time it went a lot better. The needle stopped at 17.2 kg – that is 37.9 lbs.

In the meantime a small crowd of dog walkers gathered around me, and they were impressed by the size of her. I used my charms and managed to snare one of the lady`s to make some pictures. This way I didn’t have to sack the fish, something that I rarely do. I checked the pictures on the small camera display and I must admit, the lady did a pretty good job. After that all done I gave her back her freedom. What an unbelievable day. First time on the lake and my fist fish is a 50 year old stunning Heidemij carp. I called my wife and about 10 friends of mine. I just had to tell someone. 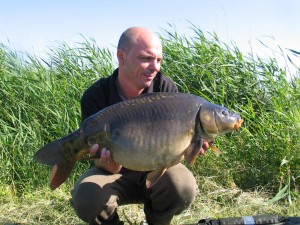 That evening I managed to catch one of the newly stocked mirrors and the next morning I caught another mirror that weighed a nice 26 lbs. This on a lake that is classed very difficult and where most anglers manage to catch 10 to 15 fish a season.